Morocco has a strong culinary tradition, which draws from centuries of Arab, Spanish, French and Berber influence in the country, and Morocco’s historical position at the end of various African spice routes. Its signature dishes, which were largely developed in the royal kitchens and noble households of medieval times, are still enjoyed today everywhere from the fanciest restaurants to the lowliest food stalls. Here are 10 foods you have to try in Morocco.

Tagine is a warm stew named after the pot (a tagine) in which it is cooked. It can come with anything from beef, to vegetables, to fish, to lamb, and is usually loaded with spices. Whatever you happen to get in one, it’s sure to come out sizzling and perfectly cooked due to the historical cooking contraption.

Harira is a traditional soup that’s available as a starter at virtually any Moroccan restaurant in the country. It’s made with tomatoes, chickpeas, lentils, meat, a bucket of spices, and small twists depending on where you get it. This soup is so delicious and cheap that it’s worth starting every meal with it. And during Ramadan, many Moroccans will use it to break their fast.

Moroccan couscous is a staple served on the side of  many meals for filler (similar to rice in other cultures). But if you want to get the best, order a vegetable couscous that usually comes with chickpeas, zucchini, and carrots along with spices like fresh saffron, turmeric and ginger. The couscous in Morocco is probably far more flavorful than what you’re used to.

Whether you get it in juice form or served on a plate with cinnamon, the oranges in Morocco are some of the best in the world. They tend to be a bit sweeter than oranges from other countries, and if you want one super fresh, just grab one off a tree!

This food is often served as a mezze and can be found at most traditional Moroccan restaurants in the country. They are similar to a fried spring roll filled with spiced meat, then served with powdered sugar for dipping which creates an incredible flavor profile.

Morocco arguably has the best olives in the world, though it’s neighbor to the north might have something to say about that. Regardless, the amount of olives you can try in Morocco is incredible. Expect to get them at virtually every meal, and be sure to walk the souks and sample the olives at the enormous stands. There is an almost infinite variety of olives to try in the country. 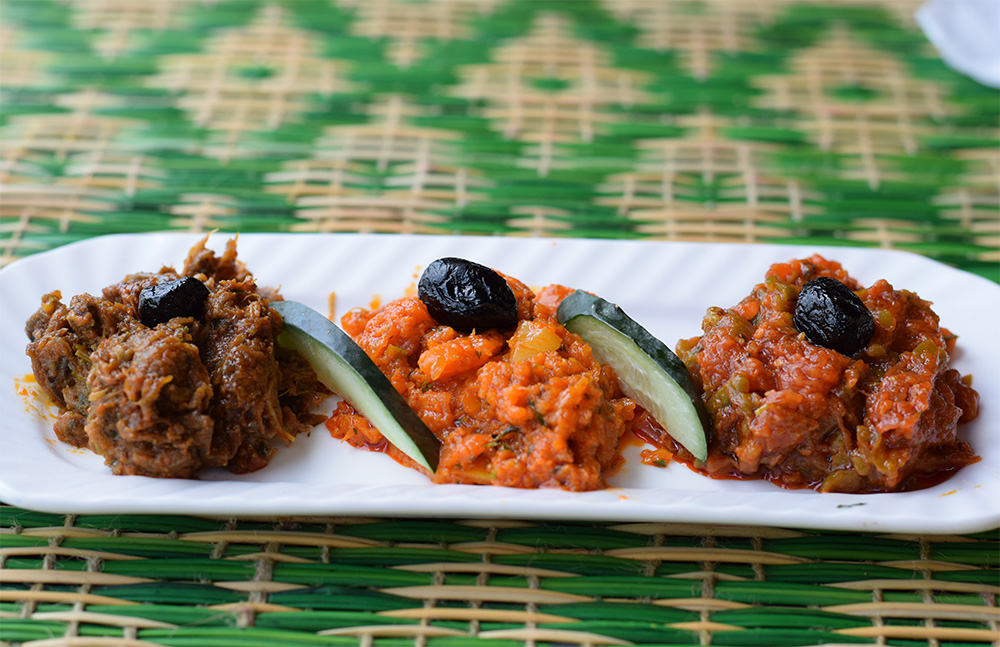 Many Moroccan meals begin with Zaalouk or other vegetable dips as appetizers. Zaalouk is one of the best and is made with smoked eggplant, garlic and other spices. It’s pretty similar to baba ghanouj but with more of a kick.

Kebabs are a staple in Morocco and can come with everything from beef to lamb liver. If you want something exquisitely spiced, go for a kefta kebab, which is usually made of ground beef or lamb, then spiced with a special blend of cinnamon, coriander, cumin and more. If you love the taste, there are plenty of kefta spice mixes you can buy throughout the souks and take home with you.

From chebakia to sfenj to baklava, Morocco is known for their pastries soaked in honey. You can often find great patisseries throughout the cities, but the best place to go is in the souks where you can get them straight from a vendor.

Last but not least is a drink that needs no introduction, Moroccan mint tea. This unique drink is ubiquitous in Morocco and you would have a hard time visiting the country without having several glasses of the stuff. It’s pretty easy to become accustomed to it while visiting, but good luck finding a perfect Moroccan mint tea once you leave, it’s just not the same!