Train buffs looking for a fun day trip from Johannesburg should consider an excursion to Magaliesburg with Reefsteamers, which operates a vintage train to this lovely valley about 48 miles (77 km) from the CBD.

Departing from Park station platform 14, the journey takes about five hours round trip (barring any unforeseen circumstances – see below), and includes a couple-hour stop for picnicking and shopping in Magaliesburg.

I recently went on this trip, and got both more — and less — than I was expecting. 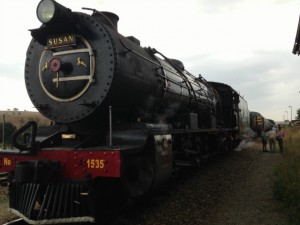 The trip began with some confusion – due to the rules and regulations of the station Reefsteamers is not allowed to put up signs in the main concourse, so we were left to our own devices to find the platform and hope it was the correct one. As hundreds of people began to gather — most of them families with small children — as the 9:00 am departure time approached, we were pretty sure we were in the right place.

By 9:15 the platform was full but the track empty, and children started getting antsy. However, shortly after 9:20 the gorgeous locomotive slowly rumbled in, to cheers and applause from the crowd.

Her name was Susan, and according to the Reefsteamers website, she “has the triple distinction of being the last surviving Class 12AR, Reefsteamers’ oldest operating locomotive and the second oldest operating main line locomotive in South Africa.” Built in the UK in 1919, she was originally designed to haul coal, and now hauls tourists once a month or so. 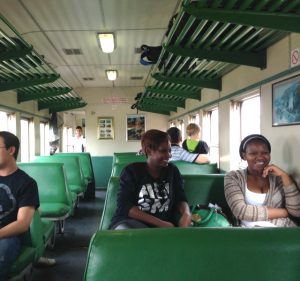 What I didn’t realize until the train arrived was that the only vintage part of the train is the locomotive — the passenger cars are decidedly dull, green, and modern, which deflated my sense of excitement somewhat. The trip is billed as a throwback to the glamour of the golden age of train travel, which it is sort of isn’t, really — unless you squint, I guess.

But that feeling disappeared as the train pulled away from the station and the trip got under way. The going was slow through the suburbs of Johannesburg, and the first 30 minutes or so were spent looking at the backs of lower-income apartments and industrial warehouses. But soon enough we emerged into a greener, more wide open section of Gauteng, where green fields gave way to lakes, rolling hills and ramshackle shantytowns where tiny children waved to us from the side of the tracks.

We made a brief stop at the quaint 19th-century station at Krugersdorp before resuming our trek northwest, though we were soon stopped on the tracks wondering what the delay was. Turns out the engineer forgot his walkie-talkie and had to stand by while one was delivered to him from Krugersdorp. 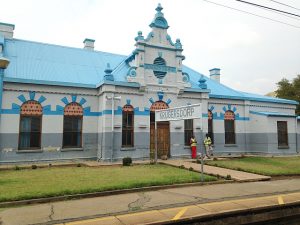 15 minutes later we were on our way again, and enjoying the chugga-chugga-chugga-chugga of the locomotive as we passed amber fields of maize and cows lazily lolling in the grass. At various points small crowds could be seen on the side of the tracks taking photos and videos of the train as she chugged by.

About an hour and half went by, and shortly before Magaliesburg, the train came to a dead halt again, this time right in the middle of a road intersection. Turns out a truck had actually crashed into it, and we had to wait in situ while police made their report and the truck was pulled back from the tracks. No one was injured and neither train nor truck were seriously damaged, but it was not quite something we were expecting on a lazy Sunday afternoon!

Soon enough we were in Magaliesburg and the train emptied out so that passengers could picnic and shop. There is a large wilderness area adjacent to the station that abuts the Magalies River, where you can lay down a blanket and sit and enjoy the scenery while eating your lunch. 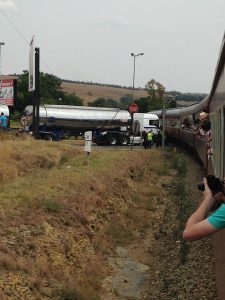 The truck that hit our train

Reefsteamers offers a selection of different picnic baskets which can be purchased in advance, but you can also bring your own as well. There is also the option to be driven to either Magaliesburg Country Hotel, or the Swallows Inn, in the town of Magaliesburg to have a restaurant lunch.

A number of vendors are set up in the station, who sell everything from handmade soaps to CDs to jewelry and biltong. Those who forgot to pack a lunch can find snacks here, and those who just don’t feel like sitting can have a wander around and get the kinks out of their legs. With me being sore from sitting so long (our journey was almost twice as long as it should have been on account of all the delays) I opted to get a 10-minute neck and shoulder massage from a mobile massage stand. Heaven!!!

Our lunch break was cut short due to the earlier delays, so in less than two hours we were hustled back into the train and started on the return journey. This is the fun part for the passengers, but not so much for the train, as it struggles to climb the gradient between Magaliesburg and Krugersdorp. The locomotives work really hard on this section, and the sounds that emanate from the engine will delight the true train enthusiast. See the short video below to witness the train trying to build momentum on the incline:

Another couple of hours later we were back in Johannesburg, somewhat tired and irritable from the long day and the coal smoke wafting in the open windows (and the whiny children running amok in the passenger cars).

I was glad to be back on terra firma, but grateful that trips such as this exist. They remind us of the virtues of slow travel in an age when it’s all too easy to hop in a car (or Gautrain) and speed to your destination without really savouring the scenery along the way.

And they give us a chance to connect with others. After spending more than eight hours with the same dozen or so folks in my section of the train, I came away with some potential lifelong friends. Maybe we’ll take another steam train trip together? Who knows.

Reefsteamers offers journeys every month between Johannesburg and Magaliesburg, or between Irene and Rhodesfield. There are also special one-off trips to other destinations. Please consult their timetable for exact dates.