A visit to Kenya’s vast northern region is a true adventure: nomadic tribes still herd cattle across the harsh desert and scrubland; wild frontier towns provide respite from the heat and dust; a handful of national reserves showcase outstanding wildlife viewing; and ancient Lake Turkana cuts a shimmering green swathe through the landscape. 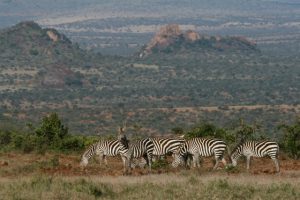 The Laikipia Plateau sits at the bottom of Kenya’s wild northern district and its stunning landscapes range from arid semi-desert to dense forest to vast open plains. Here tribal communities, alongside ranchers and settlers, have been responsible for one of the country’s greatest conservation triumphs: a diverse population of protected wildlife wanders the land in safety, while traditional farming methods and ways of life have been maintained.

Tourists are a rarer sight than in Kenya’s better-known parks so you’ll get to encounter the Big Five (all can be found here) without a queue of 4WDs angling for a better look. There are also several superb lodges set in the area’s private ranches and conservancies and those with a bent for rustic luxury and isolation will be spoilt. 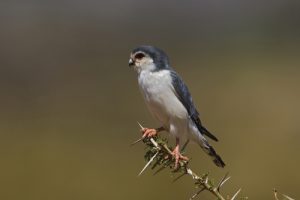 North of Laikipia, the land becomes hotter and dryer. The rugged terrain is home to the Samburu people and to the 104km² m Samburu National Reserve, one of three reserves clustered around the Ewaso Ngi’ro River. The other two are the 131km² Buffalo Springs National Reserve to the south and the larger but less populated Shaba National Reserve.

Samburu’s game viewing is among the best in the country – it’s famous for leopard, wild dog and elephants, but you’ll find all of the big cats here as well as rarer animals including Grevy’s zebra and reticulated giraffe. The 450 bird species will keep birdwatchers happy.

Another highlight of Samburu is the opportunity to interact with the Samburu through visits to local villages. And to take part in a number of adventurous activities – including walking, bicycle and camel safaris. 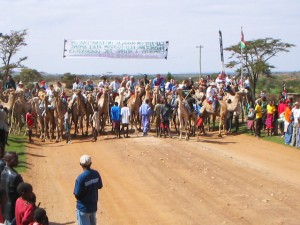 The dusty hillside town of Maralal is the administrative headquarters of the Samburu people and was once home to explorer and writer Wilfred Thesiger.

While Maralal has all the necessary facilities, including cheap hotels and some good places to eat, it would be a shame to this charming town as just a fuel stop. The people are friendly, the shop fronts are straight out of a Western and camels are routinely ridden around the streets, so it’s fun to spend a few hours just wandering around.

It’s also home to the famous Maralal International Camel Derby – a 10-kilometer race held every August that even first timers are allowed to enter – and the adventurous are well catered for with a number of nearby adventure activities such as white water rafting and camel trekking. 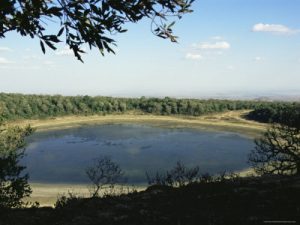 On the far side of the Chalbi desert cool, green Marsabit National Park sits at the base of Mount Marsabit – a huge extinct volcano. It is covered in mist-soaked forest and is home to three crater lakes, which serve as a magnet for the area’s nearly 400 species of bird.

The park was once famous for its long-tusked elephant (including the legendary Ahmed, who was provided with 24-hour security surveillance by Kenya’s president in the 1970s), but the animals not seen as often these days and nor are many of the other species found here, such as lions, leopards and hyenas.

That doesn’t seem to matter though, as sitting on the deck of Marsabit Lodge watching buffalo graze in the crater lake below can be enchanting. Further up the mountain, Lake Paradise, another water-filled crater, provides a breathtaking view over several hundred miles of the land below. 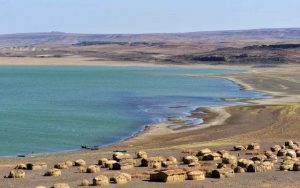 Lake Turkana, nicknamed the “jade sea”, is the world’s largest desert lake, stretching along the Rift Valley some 250 km south from the Ethiopian border. Although there is game to be found here (mammals include Burchell’s and Grevy’s zebras, lion and cheetah) it’s the experience of getting here that makes a visit so worthwhile. To get here you cross the lunar landscapes of the barren Chalbi desert and are eventually treated with an astounding first view of the lake – a splash of emerald green framed by black and brown volcanic ranges. Although it may look inviting, swimming in the lake is off limits due to its population of Nile crocodiles – the largest in the world, as well as numerous hippo.

A trip to Turkana also provides the chance to observe the traditional cultures that are still very much in evidence, including the Turkana, Samburu, Elmolo and Gabbra tribes.

The area is so important it has received the attentions of UNESCO. Lake Turkana World Heritage Site, made up of Sibiloi National Park, and the South Island and the Central Island National Parks, is rich in evidence of early man. Local and international palaeontologists have found hominid bones and stone tools illustrating that hominids lived on the lakeshores as far back as 4 million years ago.

Northern Kenya has a dangerous reputation, but it is the northeast, alongside the Somali border, that remains off-limits. The area has been blighted by tribal feuds, banditry and terrorism, most recently the killing of 148 people at Garissa University by militant Islamist group al-Shabab. The area to the north and west of Mount Kenya, including Lake Turkana and the beautiful Laikipia region, is relatively safe, though an organised trip might take some of the pressure off.

Most people visit northern Kenya as part of an organised safari – either flying in to a park or reserve, or on a hardly overland adventure taking in the highlights of the region (of these Gametrackers Safaris, based in Nairobi, is an excellent long-established outfit)

If traveling under your own steam be prepared for a boneshaker of a journey. You’ll need a hardy, well-equipped vehicle, and a lot of patience. You should also be aware that armed hold-ups along the route are not unheard of.

Other Kenya articles on AFKTravel:

Exploring The Kenyan Coast: 15 Activities To Do In And Around Mombasa
Where To Play Golf In Kenya
15 Reasons You Should Go To Watamu
Flamingos: Kenya’s Other Great Migration