As the editor of AFKTravel, I review restaurants. A LOT of restaurants. In fact, in my first three months here in Johannesburg I reviewed approximately 65 restaurants, and gained 5 kg in the process.

That works out to about 1.3 restaurants per day, and 7 grams per restaurant (or something — I’m American and haven’t mastered the metric system yet).

Anyway, I’ve still got a long way to go before I’ve eaten at ALL the Joburg restaurants that are worth trying, but I’ve already found a few favorites. Here’s my shortlist of places that I regularly go back to, even when I’m not paid to. 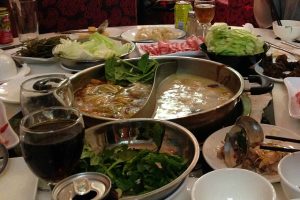 Shanghai Hinabe: This simple spot tucked into a block in Benmore Gardens has only one square room, bare walls, and about six tables. But it’s full of happy diners tucking into giant vats of soup. It’s “hot pot” dining, where you order a selection of meats, seafood, veg and noodles, then drop them into a boiling pot of broth built into the center of the table. (In this case, it’s a Japanese concept executed by a Chinese owner, with Chinese ingredients and preparation.) It’s very plain, and the service is somewhat erratic, but Shanghai Hinabe is loads of fun (go with a group), tasty, and above all offers great value – my husband and I paid less than R150 (US$14) for an absolute HEAP of food.

Delta Cafe: I just discovered this place a few weeks ago and LOVE it. Nestled in the rustic REEA complex on Marlborough Avenue in Craighall, it backs up to wild Delta Park and Braamfontein spruit, so being there sort of feels like you’re on a picnic in a country meadow. Cyclists, dog walkers and runners pop in from the park to grab coffees, cakes, burgers and sandwiches, and spread out on the lawn or the outdoor picnic tables. Children play on the swings, and there’s even an adjacent horse stable. Delta Cafe is positively bucolic — not a word that’s normally associated with big, bad Johannesburg. 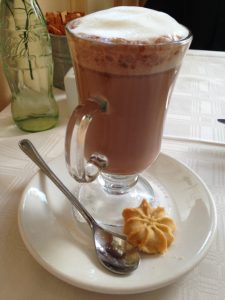 Hodges Coffee House: Hodges does not aspire to be chic or sleek, and you won’t find it on any “best coffee houses in Johannesburg” lists. That’s why I like it — because it’s totally unpretentious (I’m just about the least hip person on the planet, so I fit right in). It’s just a cute, homey, cat-themed cafe tucked into The Colony centre on Jan Smuts Avenue. They serve breakfast all day, hearty gourmet sandwiches, home-baked quiche, burgers, mince pies, and chicken rolls. Dinners are all about the meat, and popular evening specials include eisbein, pork ribs in cider, lamb shanks, and liver and onions. Hodge’s is also fond of special occasions: every weekend they offer a Sunday roast, Tuesdays are senior nights, and on American Thanksgiving they put on a special turkey meal with all the fixins’.

Liege Cafe: This elegant little Belgian café, which is tucked away in Sandton’s Atholl Square, just opened in August 2014. But since then they’ve gained quite a following, because they are the real deal, run by Belgian-born 4th-generation patissier and chef Jean-Francois Schevenels. I’ve been to Liege Cafe several times, at different times of day, and never been disappointed. Breakfast and brunch are a real treat, with authentic handmade croissants, colorful macarons, and pain au chocolat to choose from, plus mains such as brioche French toast, delectable Belgian waffles, gooey ham and Gruyere sandwiches, salade Nicoise, and Florentine omelettes. The small but carefully curated dinner menu offers appetizers like Caprese salad, tomato crevette, salmon tartare and carpaccio di Manzo. For mains, there’s beef tartare, salmon Provencal, steak au poivre, and chateaubriand. Desserts include Liege waffles, Brussels waffles, and homemade vanilla ice cream with fresh berries chocolate ganache. Oh my god, my mouth is watering just writing this.

YuMe Sushi (the one in Parkhurst): I grew up in Los Angeles and San Francisco, where great sushi can be found on every corner. But this is not the case in most other cities I have visited around the world (except Tokyo and New York), where sushi is usually ho-hum at best, and at worst, inedible. So I was a bit skeptical about what I’d find at YuMe, a sushi bar that had been highly recommended to me. Well I can happily report that it was fantastic and really felt like one of my favorite haunts from back in LA or San Fran. I love the sushi conveyor, the neon colors, the funky vibe, and the inventive rolls. Last time I went I tried the the “versushi roll,” which melded springbok carpaccio with avocado and parmesan, and was topped with a raspberry balsamic. The flavors didn’t seem to fit together intuitively on paper, but in practice they were surprisingly well-matched. There’s lot’s more like this at YuMe, but also more basic stuff for the less adventurous.

Taj Mahal: This little hole-in-the-wall Indian place is also tucked into Atholl Square (you’ve probably figured out by now that I live near there), and has absolutely the best Indian I’ve had so far in Jozi. You won’t find Taj Mahal in guidebooks and it hasn’t won any awards, but that’s OK — I prefer that it stays semi-secret. It’s family owned and very friendly, and the food is just superb in every way. My favorite dish is the lamb korma, which has an enticing hint of sweetness to the sauce, but the staff will never tell what the ingredients are, claiming it’s a family secret. The garlic naan is amazing too, as is the chicken tikka masala, and pretty much everything else. I eat here probably once a week, it’s that good (and affordable).