The great Serengeti migration may see its deadliest year in almost a decade, according to HerdTracker, a web app that lets users see animal movements in real time.

HerdTrackers’ spotters have noticed that herds of wildebeest, zebra and Thomson’s gazelle have moved north toward the Grumeti river three months ahead of schedule this year, because of severe drought in the Serengeti. 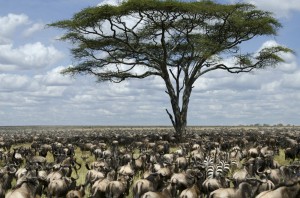 They normally cross the river during June’s dry season, when water levels are generally low. However, this year the Grumeti crossing is expected to happen during the rainy season (April – May), when the river is at its gorged peak and predators are extremely active.

The river’s five-metre-long Nile crocodiles find it easiest to hunt during this period, and in their quest for food are guaranteed to take advantage of the massive herds crossing. Which means the event will be nail-biting and deadly for the animals, yet exhilarating to behold for visitors.

Finally! Rain in the @Singita_ Grumeti concession. Perfect timing too – April is the rainiest month in the Serengeti! pic.twitter.com/2dKtRFzkvZ

Though the rain has now begun, March was a very dry month in the Serengeti and images and video featured on HerdTracker from nearby camps and lodges in the area showed just how arid things were getting, forcing the wildebeest herds to desperately search for a more permanent water source.

“The Serengeti, the surrounding plains, and the savanna-woodland has been extremely dry with the last proper rain being recorded during early January,” HerdTracker creator Carel Verhoef said. “This forced the herds to permanent water sources like the ones in the Hidden Valley, Ndutu, Moru Kopjes, Maswa and the Singita Grumeti dam. The migration was also spotted at the artificial dam in front of Four Seasons Serengeti Safari Lodge, the Seronera River system and the natural springs of Lobo and the north-eastern Serengeti.” 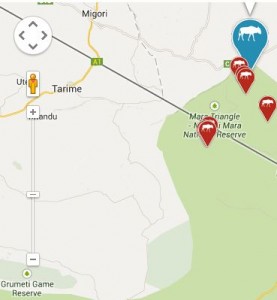 HerdTracker contributor and Singita Grumeti guide manager Ryan Schmitt says that this is the first time that he’s ever seen the herds this early in the Grumeti region.

“I’ve been here (in Grumeti) for around eight years now and typically when the herds do cross the Grumeti River, the water levels are quite low,” said Schmitt. “However, since I’ve been here, this is definitely the earliest that the herds have come, in fact, they’re about three months early.”

Those travelling to the Serengeti in early April normally don’t see much predator vs. prey action. But this year they “could see lots of action there,” according to Schmitt.

“It looks like the herds in the Serengeti’s Western Corridor will be around the Grumeti River until June, which means that there’s a very good chance that we may see an action-packed Grumeti River crossing this year,” Verhoef said. “And you only get those about once every ten years!”

HerdTracker is a web-app which plots the precise location of the great wildebeest migration in real time to a Google map and in a Twitter-style timeline. It’s publicly accessible from any web browser – desktop, mobile or tablet.

The precise location of the migratory herds is sourced weekly from four different trusted sources: pilots who fly over the Serengeti, safari guides on the ground, Tanzania National Parks Authority rangers and lodges in the Masai Mara in Kenya. These trusty sources also send us exclusive images and videos of the wildebeest migration to back-up their report.