Unfortunately poaching in South Africa has been on the rise for several years, and Kruger National Park has been at the forefront of this activity.

In 2014, 1,215 rhinos were killed by poachers in South Africa, representing a 21% increase over 2013. Two-thirds of these deaths were in Kruger National Park.

With these sobering statistics in mind, South African National Parks (SANParks) announced on March 19 that it is planning a one-year test of the effectiveness of Unmanned Aerial Vehicles (UAVs), otherwise known as drones, at reducing poaching. 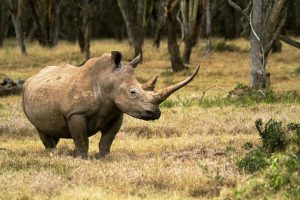 “By the end of the project, we will have a lot of information about the use of available technology in anti-poaching operations and be able to make an informed decision on what is best for our enviroment,” said SANParks CEO Fundisile Mketeni in a media statement.

The testing is part of several anti-poaching initiatives supported by the Rhino Protection Programme of the Peace Parks Foundation, a group that jointly manages natural resources across political boundaries.

Some rhinos have also been relocated from Kruger to other parks in South Africa which are less subject to encroachment by poachers.

It is hoped that these combined efforts will put a dent in the number of animals that have been killed in recent years.