It’s time to blow hot air (literally not figuratively) and go on an adventure in a balloon. From rocky monuments to vineyards, here are 15 great places around the world to go on a hot air balloon adventure. 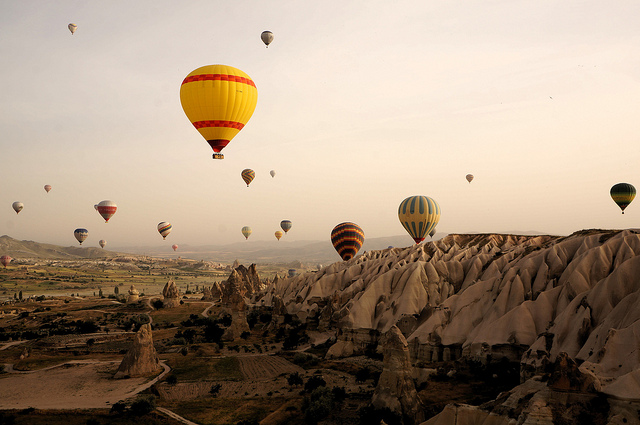 Bring your children along to this spot because locals call these rock formation “Fairy Chimneys.” Or you, as an adult, can pretend to finally find where the fairies hide. You will also see pigeon houses, orchards and vineyards throughout the region. Be sure to contact Ballooning Cappadocia in advance for a tour. 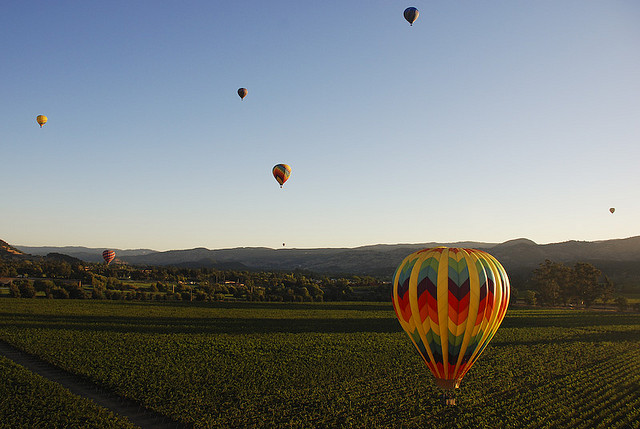 What’s a better place to see wineries by balloon than Napa Valley? Vineyards, farms, hills and livestock stretch out for miles, and riders can check out what makes this Northern California area a top destination. There are several balloon companies in the area including Napa Valley Balloons, Inc. 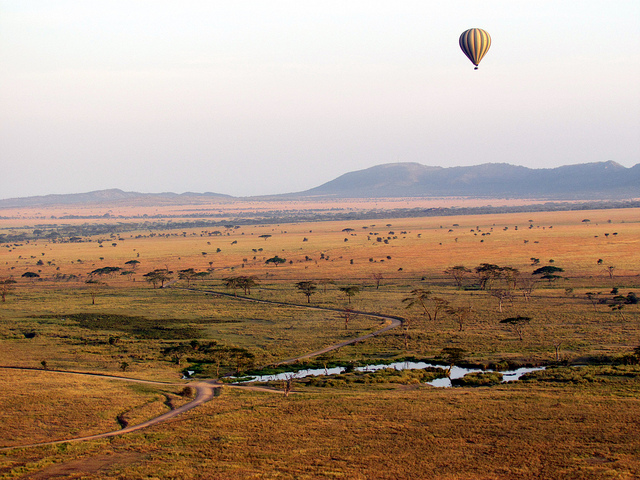 In the Serengeti, there are safaris and then there are balloon safaris. Why drive dangerously near the animals when you can hover high above the antelopes, zebras and rhinos? So book a tour, enjoy the wildlife, and pray the balloon doesn’t land into a pit of hungry lions. 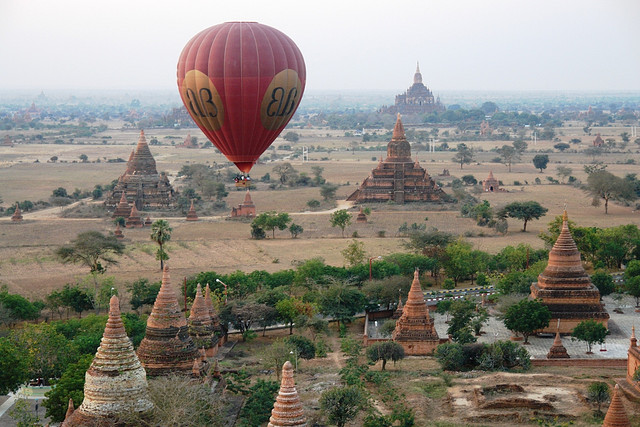 This ancient city of Bagan once held over 10,000 buddhist temples, pagodas and monastries from the 9th to 13th centuries. Balloon riders can view the last remaining 2,200 temples that are still standing. And trust us, the view will leave you breathless. 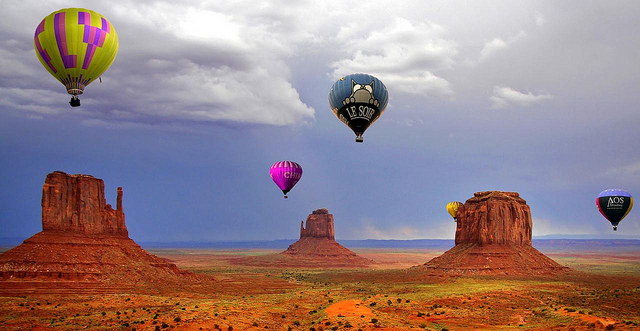 You have probably seen this background in several movies, including “Forrest Gump” and “Easy Rider.” The valley is also home to the indigenous Navajo people. Those who book the tour can easily fly by the twin buttes, “Totem Pole,” and many interesting rock formations in this dusty red desert. 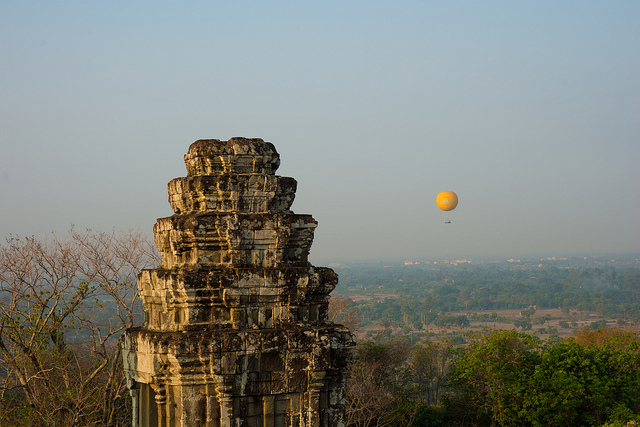 Often compared to Bagan, Angkor also boasts ancient ruins of Hindu temples that span from the 9th to 15th centuries. Balloon riders will see the famous Angkor Wat temple that is the largest religious monument in the world and view many of the preserved temples.

You have to admit, it’s easier to go to the top by balloon than it is to hike the alps. At certain times of the year, tourists can marvel at the majestic Alpine mountains blanketed with snow and overlook tiny communes of Switzerland. Who knows, you might get lucky and be the first to see an abdominal snowman hiding in the mountains?

If you ever wanted to feel like Indiana Jones escaping from the Nazis by balloon, this is your chance. The Royal Aero Sports Club in Wadi Rum allows visitors to see the red mountains made of sandstone. If tourists squint hard or bring their binoculars, they might see ancient petroglyphs carved into stones by Nabateans from CE 37-C 100, as well as the ruins of their temples. 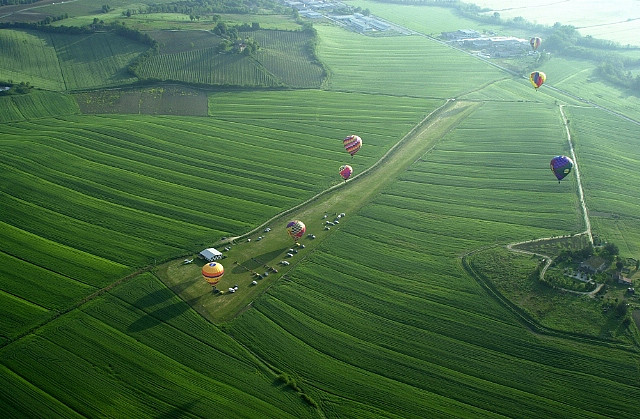 A handful of locations in Tuscany offers hot air balloon rides, so it’s best to do your research for the best deal with the best view in the area. But guaranteed, anywhere in Tuscany won’t let you down with its never-ending fields of vineyards, olives and small Italian communes perched on hills. 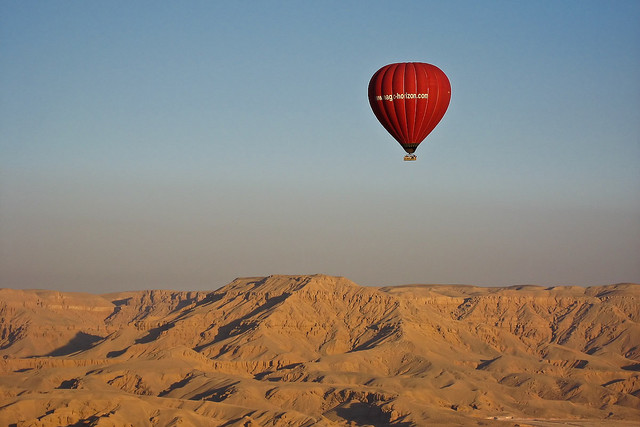 Luxor was hailed as “the world’s greatest open air museum” with many temples and ruins. Instead of walking like an Egyptian and exploring by foot, tourists can get a bird-eye view of the area and admire needle monuments, statues, as well as the city. 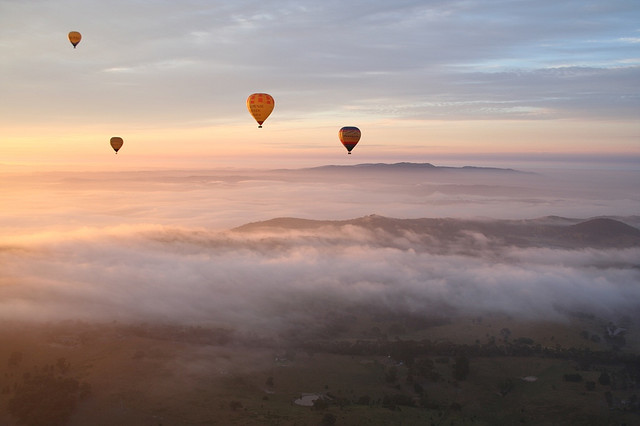 If you can balloon over the Serengeti, you can definitely explore the outback from above. Tourists can see roaming kangaroos in their natural habitats as well as rocky mountains. Crikey!

It’s important to go during tulip season (around April) when booking a tour in Holland, otherwise you won’t get the magical effect of ballooning over the miles long flower fields. From afar, you will have to keep pinching yourself because the intense colors from the ground will not look real to you. 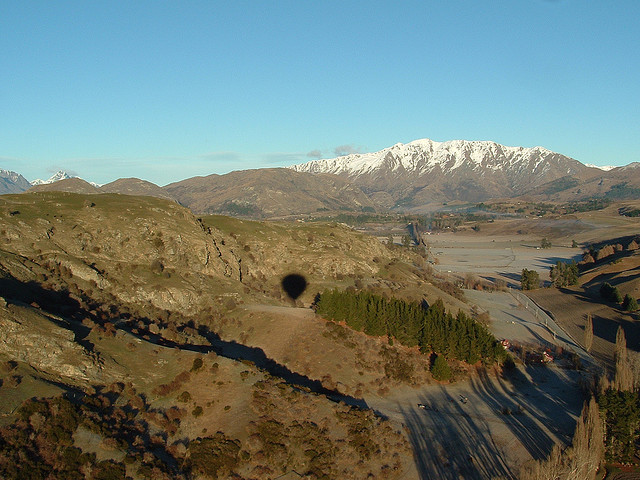 What’s a better way to explore New Zealand’s natural landscape than by air? Tourists will see hilly fields with snow-tipped mountains, lakes and rivers. The region is largely untouched by humans, so you’ll be able to see nature as it should be. 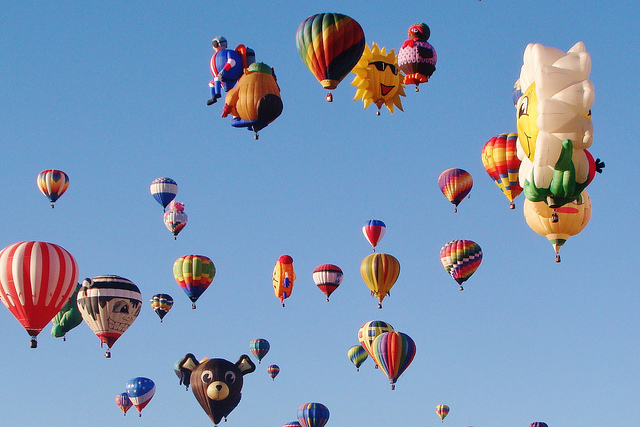 While it’s fun to ride hot air balloons in Albuquerque year round, it’s best to attend to the famous Albuquerque International Balloon Fiesta that takes place annually. Hundreds of creatively-designed balloons will take off into the air at the same time. Guests can participate in one of the balloon rides and be blown away (figuratively) by the waves of funny balloons floating in the sky with you. 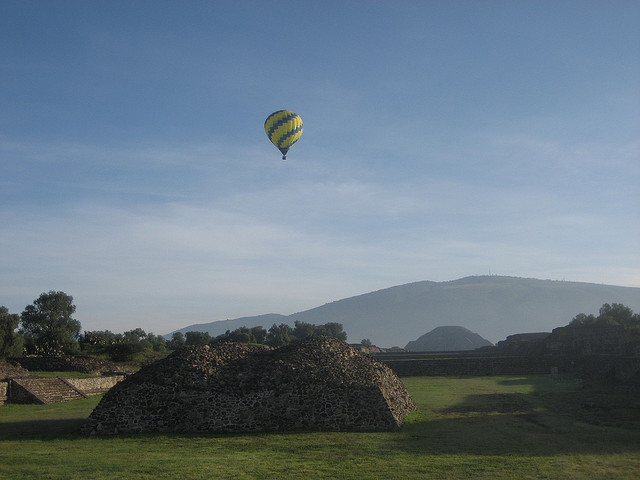 A short drive from Mexico City will take you to Teotihuacan, a pre-Columbia Mesoamerican city full of ancient pyramids and ruins dating from 100 BC. So fly over the many temples, and mutter to yourself whether this alter has ever been used for human sacrifices or not.