When people think of British food, most people will think of the fish n’ chips and…umm…well, that’s it. But there is more to British cuisine that goes beyond the negative stereotype of the food being bland and boring. From countryside taverns to gourmet spots, here are 15 London restaurants that will make you appreciate British food.

At Hix Soho, staff will bring out their finest cuts to let you personally pick out the slab of meat for your meal. If not ordering from their butchery, you can feast on grilled Moyallon liver and bacon, or Portknockie cod cheek curry. Vegetarians, do not fret, they have plenty of bubble n’ squeak (seashore vegetables) for you. 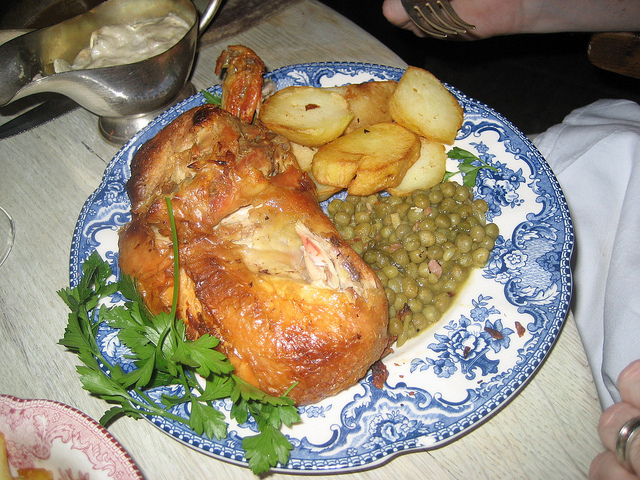 Feeding the locals over 40 years, Maggie Jones’s never fails to bring a smile to its diner’s faces. You will be greeted by the barnyard-like interior with antique tools scattered around, putting you instantly in the mood for a homemade dish. Traditional meals such as Maggie’s creamed fish pie and scotch rump steak with onions eerily resemble a recipe from a Cornish grandmother in the countryside. And to be even more British, end your meal with a tasty dessert bread and butter pudding or stitton cheese and celery (before you make a face, try it). 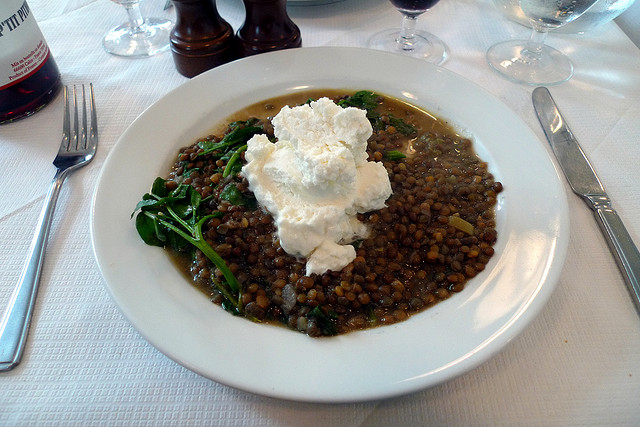 Taking place inside a renovated smokehouse building, the interiors are minimalist with white furniture and walls (your colorful food will pop out more). Vegans may want to take their money elsewhere since the menu only offers meat-packed dishes such as cold roast lamb with chicory and anchovy, ox liver with celeriac and pickled walnut and deviled kidneys. We suggest you wrap it up with some rhubarb jelly or spotted dick (trust us, it’s not what it sounds like). 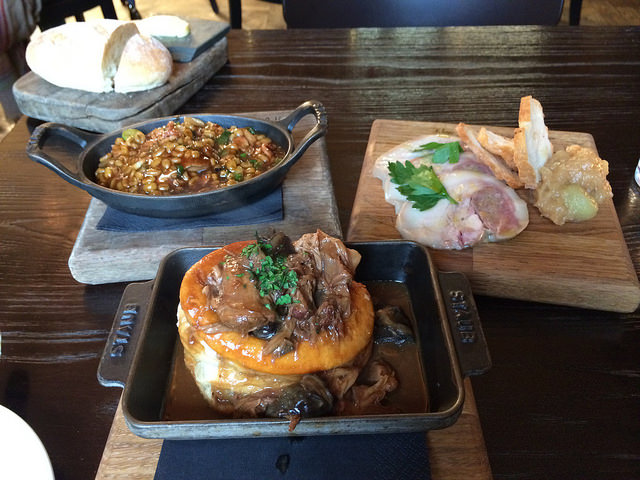 With daily specials on the menu, this restaurant never gets old with decently priced meals. Diners have a choice of ordering from the pub menu, the feast menu or the bar snack menu. The pub menu includes items such as Cumbrian ribs and longhorn cheeseburgers, the feast offers crayfish and rare breed beef of Wellington, while the bar snack lets you nibble on herring roe and game chips. 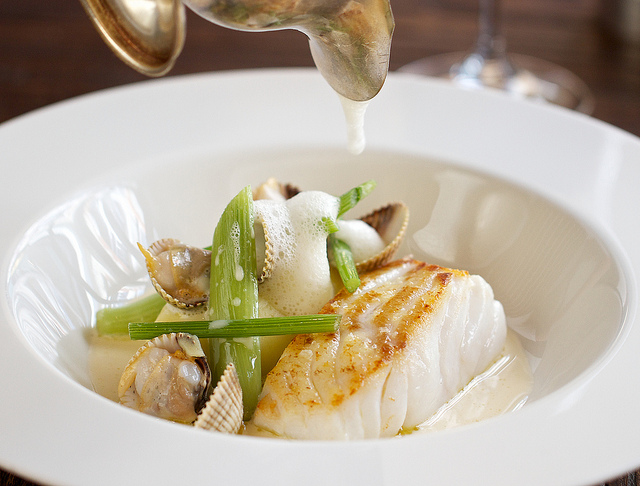 Come to Berners Tavern  for the best of British treats such as dressed Colchester crab, roasted goosnargh chicken and quail on toast (why not?).  For a traditional fish n’ chips, stop by on Friday during lunchtime for Fish Friday and enjoy the restaurant’s battered Cornish cod with mushy peas and chips (that’s french fries for ya’ll).

Visitors have a choice of either eating at the bar for a cozier atmosphere while gorging on Devon crab cakes or roasted Guinea fowl breast, or they can head to the upscale first floor dining room to enjoy the finest sirloin steaks smothered in Bearnaise or red wine jus. Of course, you cannot leave without sampling one of the restaurant’s many puddings (we recommend the spiced apple). 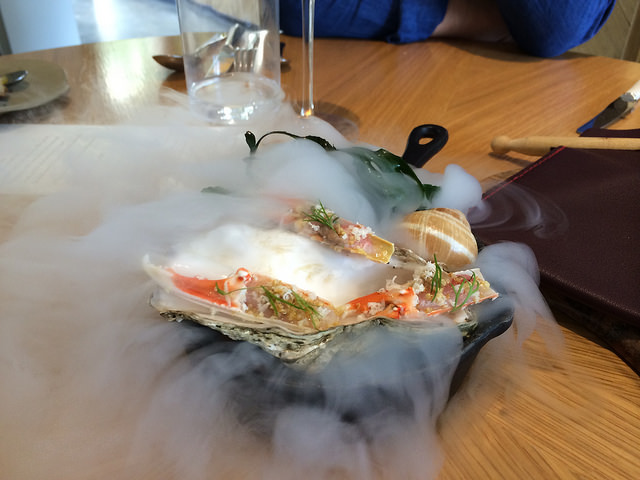 With the interior set up like you’re dining inside an elegant library with a book on every table, diners can embark on a foodie adventure by choosing the six or 10-course menu. Bread and dripping, heritage potatoes, fallow deer with yeast and dandelion and foie gras with sorrel will be brought out to you chronically. After this adventure, you’ll definitely have a restaurant story to tell your friends. 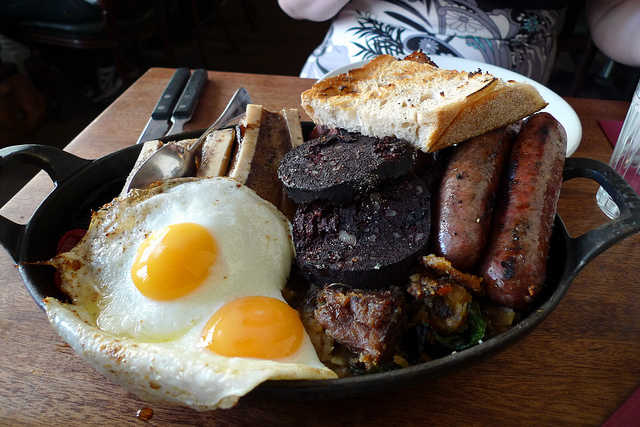 At Hawksmoore Spitalfields, you can feast like King Henry VIII! Endless amount of porterhouse steaks, fillet tails and lobsters are available on the menu to satisfy the carnivore in you. However, its suggested to swing by for the Sunday Roast for a large rump of longhorn beef with its trimmings cooked on a spit for you and your friends. Let the hedonism begin!

At over 200 year old, Rules is believed to be London’s oldest restaurant that stays true to its traditional British cuisine. With steak and kidney pies, rump of venison, and grilled Dover sole on the menu, you will catch a glimpse of what it is like to dine like Victorian royalties in the 19th century. 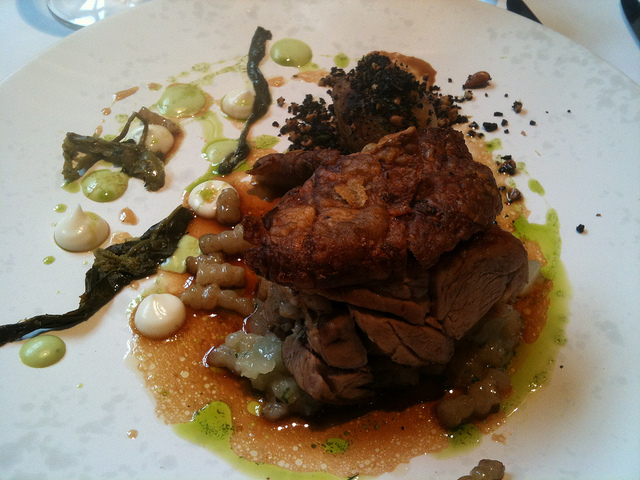 The staff at The Ledbury take pride in making art of out their meals. Each traditional British meal like roast breast and confit leg of pigeon and Herdwick lamb with salt baked turnips are brought out to you arranged in a Pablo Picasso or Joan Miro fashion. Be sure to book your reservation in advance instead of just showing up, the restaurant gets pretty busy! 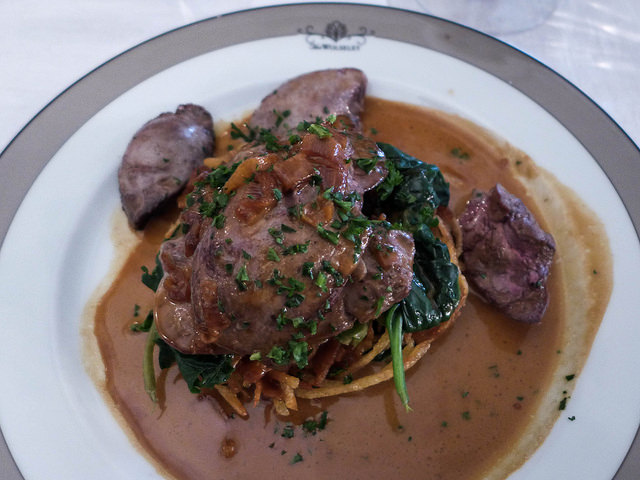 What’s more British than having afternoon tea with your veal chops and oysters? At The Wolseley, guests can enjoy the most highbrow art of drinking tea along with finger sandwiches and scones while retiring to more-filling meals at the dining room. Cheerio!

Middlewhite faggot and mash, braised rabbit legs and potted crab make this place a fun place to gorge on traditional countryside cooking. Not to mention, the restaurant is inside a renovated Victorian butcher shop to match the atmosphere with your food. 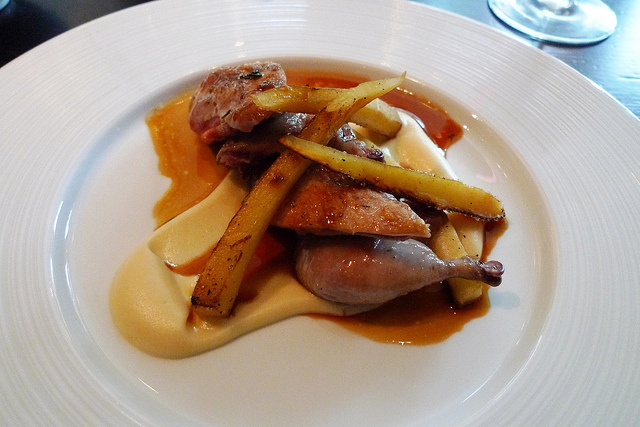 Inspired by historic British gastronomy, the restaurant offers ancient recipes of spiced pigeon, cod in cider, and fillet of Aberdeen angus. But if you have extra money to spend, you can book a spot at the chef’s table for front-row seats to watch the great food artiste at work (he/she will also serve you).

Michelin Star awarded and highly rated by Zagat, Harwood Arms is favored for a reason. The menu changes often due to its seasons and offers rolled rabbit terrine with prunes cooked in Earl Grey, Hereford snails with oxtail braised in stout and parsley, and a lovely British cheese with oatcakes, raisins and walnuts. Fancy schmancy! 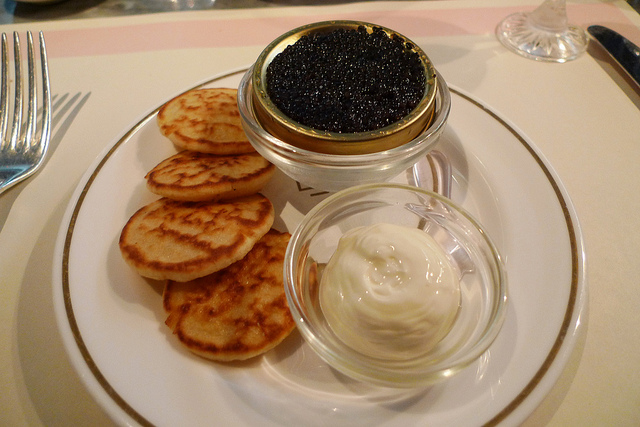 If the luxurious gold tiered ceilings and Art deco atmosphere doesn’t make you want to eat here, then one look at its menu will. Mouth watering suckling pork belly, braised shoulder of lamb, and lobster macaroni and cheese will have you salivating immediately. After finishing the dessert (chocolate truffles or dulce de leche creme brulee), you will want to celebrate your fabulous meal by hitting the club room for the restaurant’s best port wine.