“In the middle of nowhere” is how Arabella Hotel & Spa’s location was described to me by more than one person, and that’s definitely one way to look at it.

On the way to the hotel, I passed wind turbines at Caledon and vineyards at Rivendell. After arriving and checking in, I found that Arabella is close to Hermanus, but far enough to make you feel you’re away from town.

As I relaxed in the hotel lounge with a cup of tea overlooking the Bot River Lagoon — a birder’s paradise — I watched, fascinated, as the lagoon’s appearance changed with the light, cloud cover and time of day.

But there is a whole lot going on here. For one thing, Arabella’s 18-hole golf course is rated in the top five in South Africa by Golf Digest. For another, its spa is world class, and you can get seriously pampered here. I spent a happy hour-and-a-half working out in the hotel gym with amazing views of the lagoon, golf course, and a small waterfall. I gave it five stars for best view while working out. After the workout, I had a massage with spa therapist Ashley Katts.

The 145-room hotel has three restaurants and free, unlimited wi-fi, which is a shame, because the last thing you want to do here is work. There was a poolside waterfall beckoning, enticing trails lined with protea and fynbos to stroll on, and a well-stocked library with what appeared to be every coffee-table book ever published about South Africa, and especially the Hermanus area. The hotel opened in 2001, but my room looked like it had been designed in 2014. My bed, bathroom and shower were comfortable, luxurious and my only complaint is that I couldn’t stay longer. 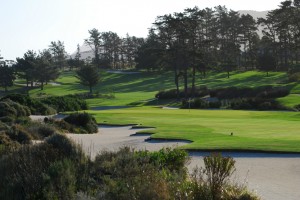 Like many South African hotels, Arabella was under renovation when I was there but you’d never know it. It was entering phase two of a golf course renovation, getting a new time-share building, and the spa was adding treatment rooms.

The hotel has babysitters on the premises — 85 rand for two hours — not too shabby. Business travelers are also catered to: The hotel’s Kogelberg conference room can take up to 300 delegates. There are five boardrooms named after whales that frequent the nearby coastal waters including blue whale, humpback, orca and Southern right.

Here’s just a sampling of what was available at the breakfast buffet: fruit smoothies, pickled fish (a South African delicacy); stewed dried fruit, fresh grenadilla (passion fruit, also a South African favorite), stewed guavas and smoked salmon. Omelettes and waffles were made to order, and I enjoyed this outstanding breakfast overlooking the fabulous Bot River Lagoon.

The sign on the front entrance said this was an African Pride Hotel, but as of April 2014 it has been a Protea/Marriott hotel.