In 1975, when he was very young, German photographer Markus Niegtsch went to South Africa to visit his aunt, who was living in Johannesburg. He got hooked on Africa during that trip and has been back over 30 times since, visiting Mozambique, Zimbabwe, Zambia, Botswana and Namibia. Markus still goes to South Africa at least once a year and feels homesick if he is away too long.

Over the last decade he has been working on improving his photography skills in an effort to capture the stunning wildlife and nature on the continent. He enjoys being in the bush, watching animals, and taking pictures that convey the special magic and spirit of Africa to the viewer. Take a photo safari through Botswana with these gorgeous pictures from Markus’s collection. 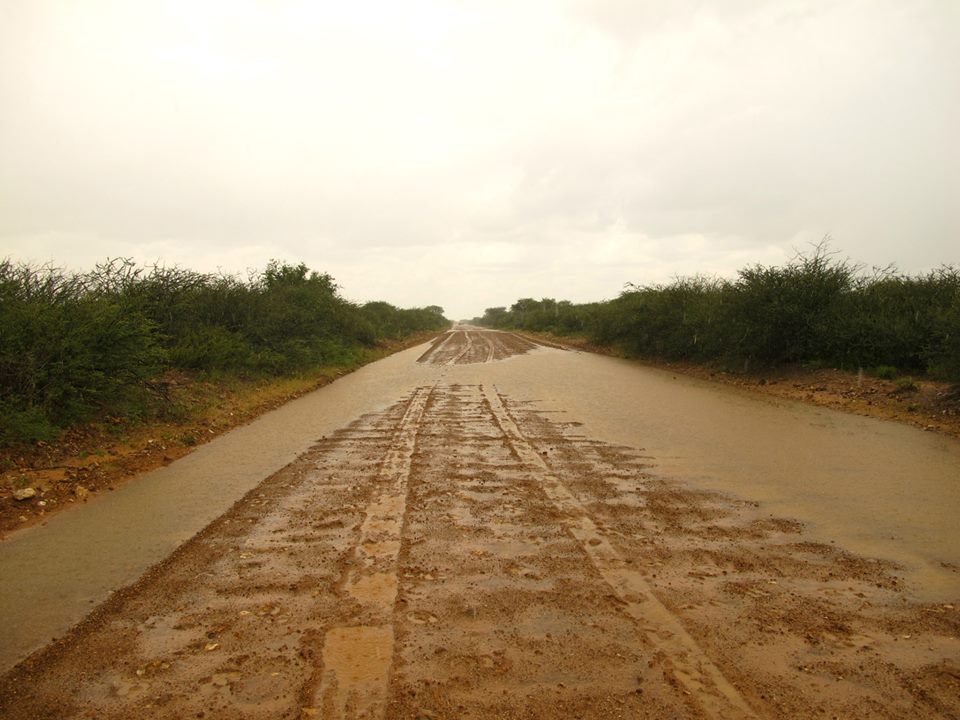 Markus set out on this Botswana adventure in 2014 hoping to get amazing shots right from the beginning. But sometimes Mother Nature isn’t the most cooperative — he was forced to cross roads like this one between Khutse and Lethakleng. The game lodge he was staying at was unfortunately also flooded. But after this initial hiccup, Markus started to get some great shots. 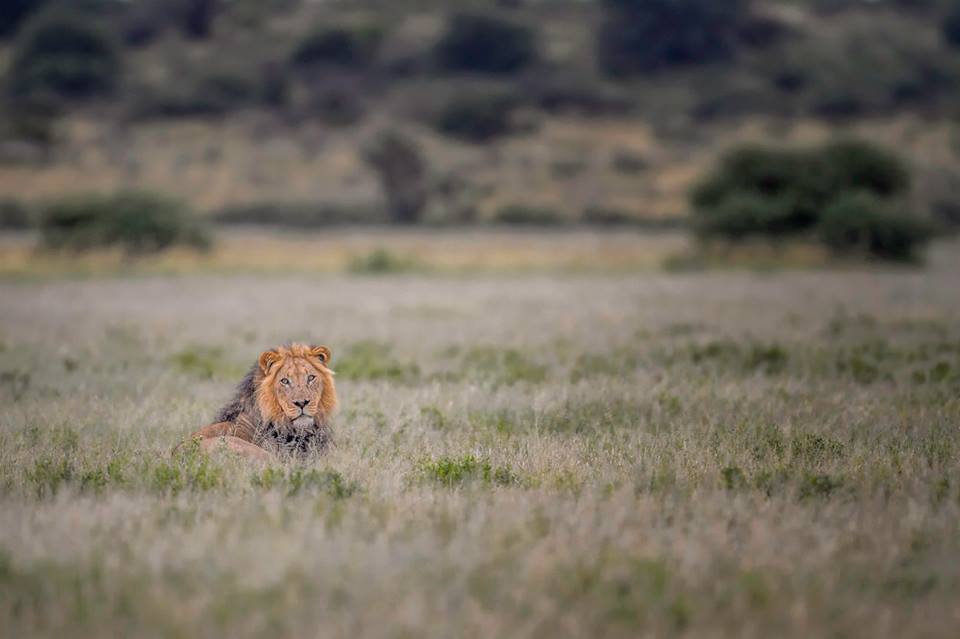 Markus captured this lion resting in the grass in Deception Valley. When the curious male turned to pay attention to Markus, it allowed him to capture this great shot. 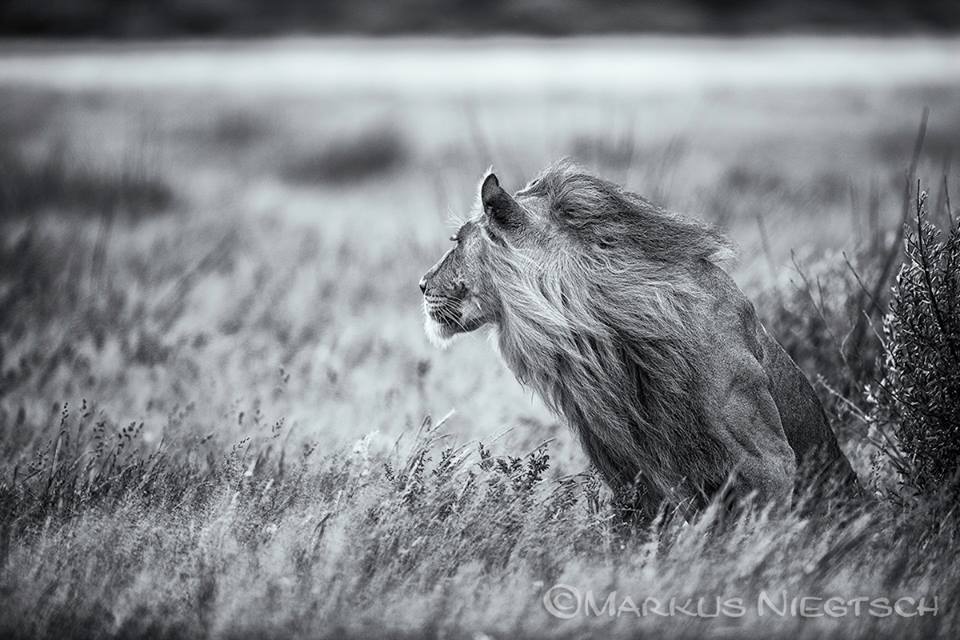 He was able to get a bit closer and capture this photo with the lion’s mane blowing in the breeze. 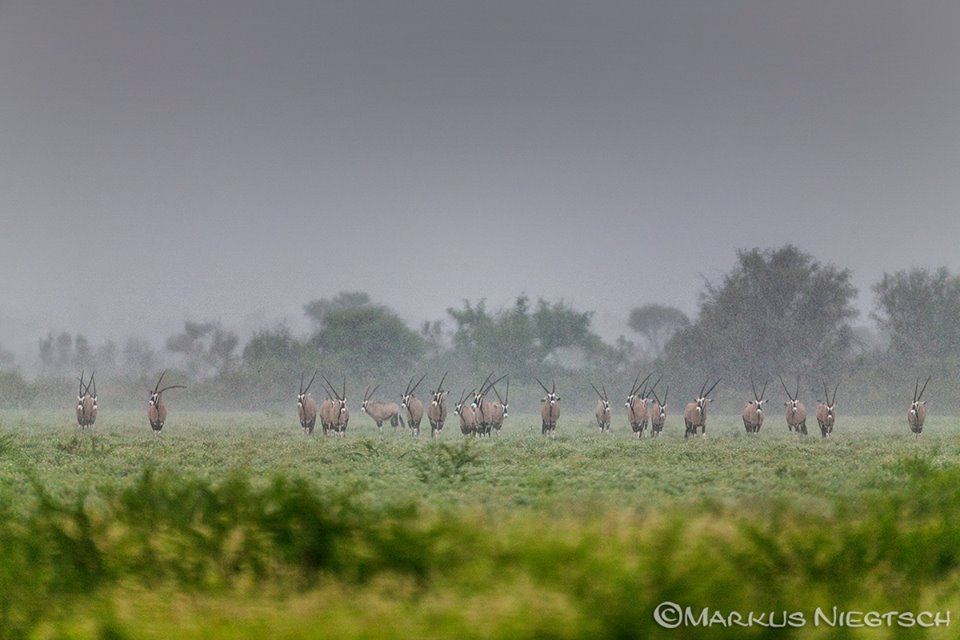 A huge herd of gemsbok linger in the distance as a thunderstorm approaches in the Central Kalahari Game Reserve. 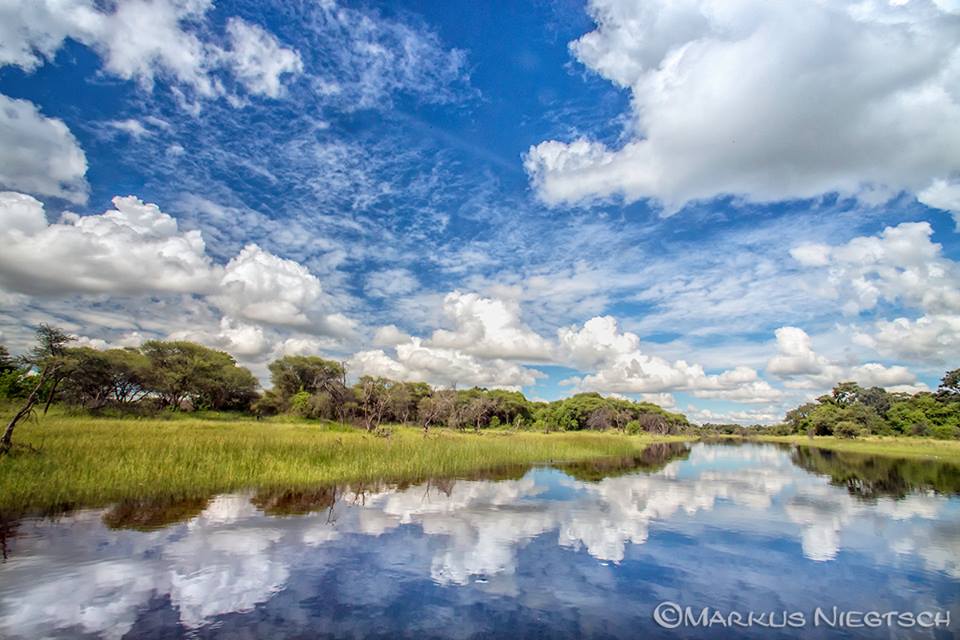 5) Reflection on the Thamalakane River

After experiencing a lot of rain, it was a pleasure for Markus to soak up the sun on a boat cruise on the Thamalakane River. 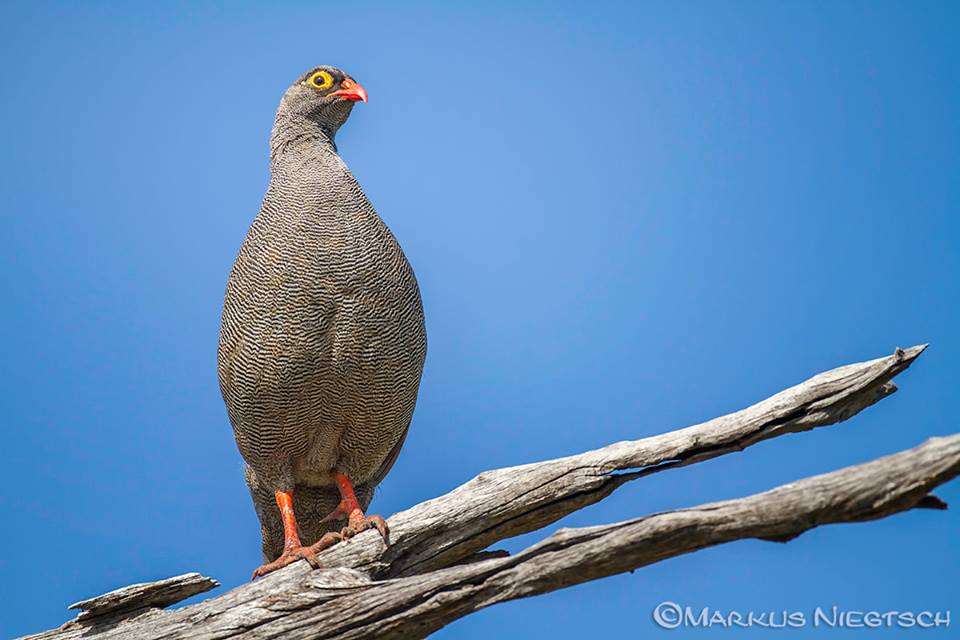 Markus zoomed in close to capture this red-billed francolin on a dead tree that it was using as an lookout point. 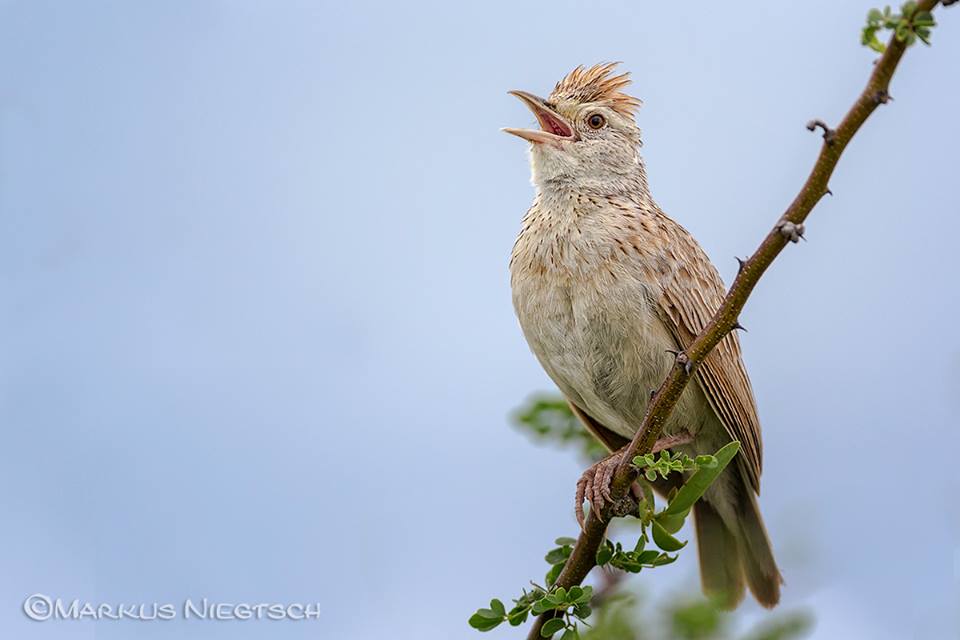 This rufus-naped lark in Khutse Game Reserve was either singing a song or yelling at Markus when he took the photo — we aren’t sure. 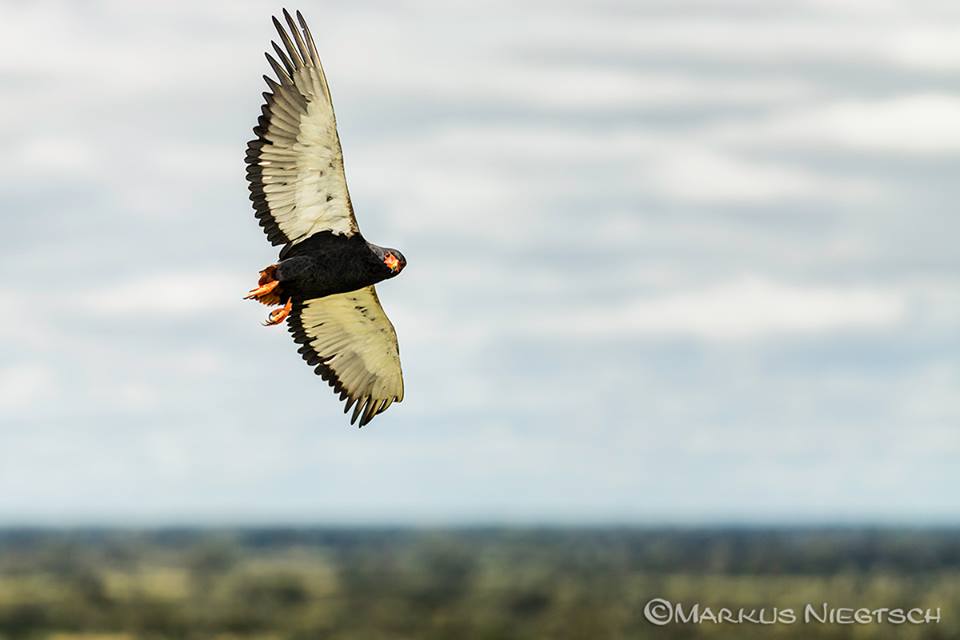 Markus captured this shot as he was flying next to the bird in a helicopter. Amazing! The bateleur was probably curious why people were flying right next to him. 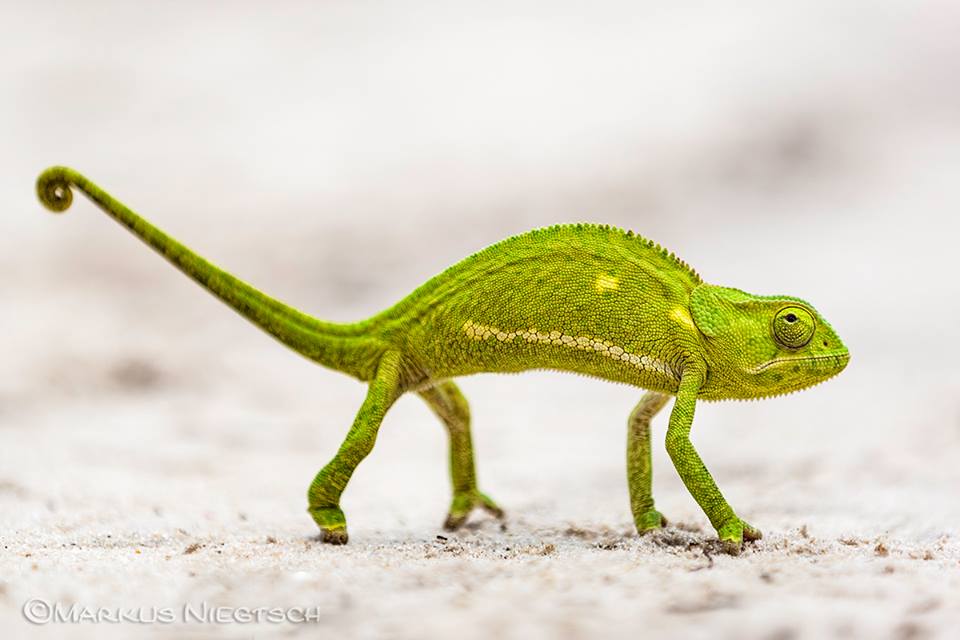 9) A chameleon crossing the road

This cute chameleon was crossing the street when Markus grabbed this shot. Luckily chameleons take forever to get anywhere, allowing for great close-ups. 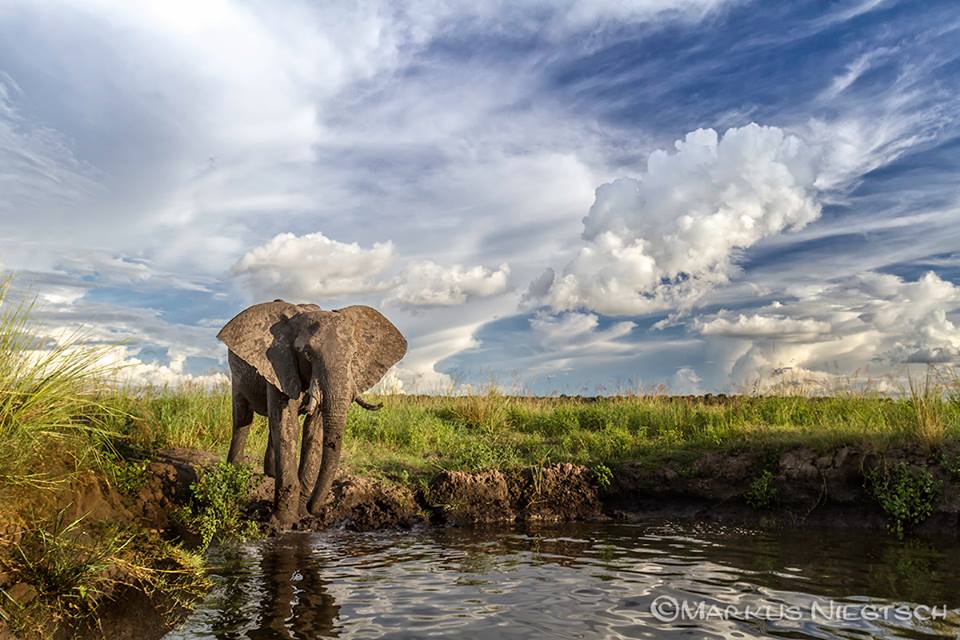 10) An elephant at the river

And last but not least, Markus was able to get this great shot of an elephant having a drink by the Chobe Riverfront. It wasn’t even five meters away from him when he captured the photo.