Douala is not only the largest and richest city in Cameroon, it’s also home to the country’s largest port and international airport. Due to its stature, things can be a bit pricey in Douala, as it’s one of the the most expensive in Africa, along with Lagos, Nigeria and Luanda, Angola. And even though it isn’t exactly bustling with tourists, it’s worth a stop for those wanting to truly explore Africa.

Douala didn’t start to develop much until German colonization, though settlements had long existed including Portuguese (first visiting the area in 1472) and the British. The city was then under the control of French forces until Cameroon gained its independence. After this point, Douala began to grow rapidly and has had a large number of migrants move into the city to support its industries.

Douala is located in the far western part of the country on the coast of the Atlantic Ocean. The city is divided into seven districts and has more than 120 neighborhoods, but the most important district of the city is Akwa, the CBD. This is where most of the business, commercial and diplomatic activities happen. Nearby, Boulevard de la Liberte is where people go for fun and play. The area features many shops and restaurants that are popular with the locals. 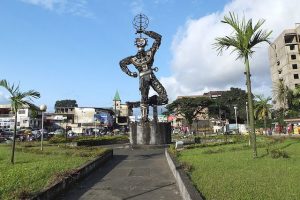 One of the more interesting sites in the city is La Nouvelle Liberte. This famous 12-metre-high landmark was erected in Deido in 1996. It was controversial when it was first built, as its form and construction are rather unique: artist Joseph Francis Sumégné used only recovered metal parts mounted on a boiler frame.

Another place worth perusing is the Marche des Fleurs. This flower and African crafts market has roughly 50 stalls selling various textiles, knick-knacks and jewelry, including items from the DRC and Gabon. You can find great pieces at excellent prices if you haggle. And it is perfectly located on the way to the airport, so you can pick up souvenirs and local artwork on your way home.

Espace Doual’art is an ideal place to witness the city’s growing art scene. Founded in 1991, this contemporary art space is home to a host of temporary exhibitions by artists from Cameroon and the rest of Africa.

The choice of hotels in Douala is somewhat limited by African standards, but there are a few decent options at the mid to higher end of the spectrum.

One of the best options in the city is the Hotel Akwa Palace. Located in the heart of the Akwa district, it makes a great place to explore some of the city’s best sights and is close to several nightlife options. The hotel features standard amenities such as WiFi, air conditioning, and TV with numerous channels. Outside, there is a pool deck and bar that is normally crowded with fashionable people just hanging out. The lobby of the hotel also features interesting photographs that show what Douala has looked like through the years.

If you want to get away from the busy Akwa district, the Ibis Douala can give you a bit of peace and quiet. The hotel features an upscale bar and an excellent restaurant that’s better than many in the city. Rooms are on the small side, but are well-kept and feature comfortable beds. Although it isn’t a budget hotel, prices are pretty reasonable by Douala standards.

And for something in the city center, the Planet Hotel is one of the better options. It offers a large conference room for conducting business meetings and has fast and free WiFi throughout the premises. Like Ibis, rooms tend to be on the small side, but are reputed to be meticulously clean. The hotel restaurant offers local and international dishes, and features carved chairs and local decor to create a Cameroonian experience.

While a bit low on tourist attractions, there are quite a few exquisite dining establishments throughout the city. For real African cuisine with the option of western meals, head to Saga African Restaurant. With an upmarket feel with a Cameroonian twist, you can having anything from ndole (sauce made with leaves and smoked fish) to pizza.

If you’re looking for something to get your day started, go to Delices for freshly baked goods and a delicious cup of coffee. Not only do they have a large variety of baked goods, but also freshly made toasted sandwiches and juices.

For a few drinks on the town, head to Cafe des Palabres. Located in Bonanjo’s main square inside a colonial German residence that dates back to 1905, this charming cafe serves light European cuisine. It is the perfect spot for sundowners, as it has a garden terrace and great vibe.

Most of the shopping in Douala can be found near the Boulevard de la Liberte, where you can find crafts, beads, and delicious locally-sourced foods (like chocolate). If you’re looking to save a bit of money, head just outside the city to Limbe, where prices tend to be cheaper.

For a more bustling shopping experience, head to Eko Market. The largest market in Cameroon, it sells anything and everything. As you stroll around you’ll witness a real visceral slice of everyday life in Douala. 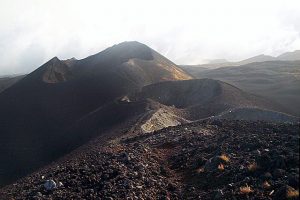 If you want to get out Douala there are several excursion options. The beautiful seaside beach city of Limbe is about an hour southwest of the city and has some particularly nice stretches of sand that are perfect for sunbathing. Be wary of where you swim though, as the current can be very strong.

You can also visit the base of Mount Cameroon, one of the largest active volcanoes in the world. Those feeling a bit more adventurous can go on climbing expeditions to the crater of the volcano. It’s not an easy climb, but well worth the effort if you’re experienced.

A cruise or kayak trip on the river Wouri is also worth it if you have the time. With stunning views of the Gulf of Guinea, the river features numerous mangrove swamps and wild birds.

The best way to get into the city is through the Douala International Airport (DLA). It also serves as the main entry point into the country. Several airlines operate here, including Camair-Co (the national carrier), Air France, Brussels Airlines and Turkish Airlines. Note that not all airlines offer daily flights, so make sure you are flexible about what days you want to arrive or depart. It isn’t recommended to try to get to Douala by vehicle.

Once you’re in the city, it’s pretty easy to get around via shared taxi. Yellow taxi cabs are available in the daytime, but hailing one at night is a bit difficult (traveling at night isn’t recommended anyway). Some taxis have up to five or six travelers at a time, so be mindful in case you happen to be sitting next to a pickpocket. In lieu of a taxi, you can also get a private driver to take you around town, though finding one can prove to be a bit difficult. The more prominent hotels may be able to point you in the right direction, however.

Languages: Both French and English are official languages in Cameroon, but many people don’t speak either. French is more common in Douala and throughout the country.

Weather: Douala has a tropical monsoon climate with hot temperatures throughout the year. The hottest month is February, which has an average temp of 28C (82F), while the mildest part of the year (July-August) is still a warm 25C (77F). The city is often humid, and gets around 140 inches of rainfall per year.

Health and Safety: The main things to look out for in Douala are pickpockets and bag snatchers. As in any major city in Africa, you should not walk around with valuables, and try to pay in cash whenever possible. Traveling around the city at night isn’t recommended, as the city is poorly lit and traffic is fairly dangerous.

Money and banking: The currency in Cameroon is the CFA, and most places aren’t going to take credit or debit cards. There are several banks and ATMs in the city that are tied to the VISA network.