Hammamet, a popular beach resort town on Tunisia’s coast, is the product of a rags-to-riches fairytale. In the early 20th century it was a relatively poor beachside town known mostly for its salty breezes and high crime rate. Yet it was perched on some of the country’s most beautiful ocean-front real estate. Little wonder, then, that developers moved in, snapped up parts of the coastline and transformed it into one of Tunisia’s most sparkling tourist destinations, popular with everyone from Dubai princesses to the family of ex-dictator Ben Ali — who used to gather at The Sindbad hotel, throwing serious parties at the height of summer. 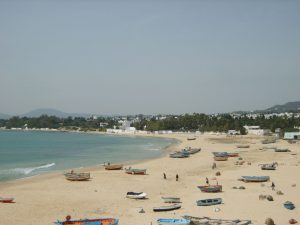 Hammamet sits just 63 km (41 mi) from Tunis along the Mediterranean coast. The key to enjoying this town of just 40,000 people lies in figuring out which part best suits your tastes. Over by the medina, Hammamet North marries beach action with an ancient city vibe; you can take a breather from sunbathing and wander through the cool medina, checking out the stores selling art, essential oils and the obligatory fake designer sunglasses. Then there’s Hammamet Jasmine on the other side of the peninsula. It’s a little more upmarket than Hammamet North, but still has its fair share of loud bars and clubs. Most hotels have their own little slice of beach paradise, roped off to ensure privacy.

If it’s culture you’re after, the Bardo Museum is a must-see. It specializes in Islamic, Roman, and Punic art and artifacts. In the medina, Dar Ben Abdallah is a former 18th century palace whose rooms contain items from the late 19th century and early 20th centuries that illustrate what life was like in that era. Another interesting landmark is the International Cultural Centre, which resides in a historic house that was once owned by a Romanian millionaire. It houses a colonnaded swimming pool, a huge black marble dining table, and four-seater bath surrounded by mirrors. The 14-acre grounds include a Greek-style amphitheatre which is the site of the International Cultural Festival in summer. Another option in Hammamet is to just wander around town and admire the bronze statues and beautiful gardens, and drink in the scent of jasmine that’s everywhere.

If you’re looking to get off the beaten track a little, head to the beach over by the Hotel President, halfway between Hammamet and Nabeul. There’s a cool breeze from the ocean, you can trot along the sands on the back of a camel, and there’s a choice of watersports to choose from. And yet despite all the action, this stretch of beach manages to retain its cool, calm vibe. If you must pick a spot to do sunset yoga in Hammamet, make it here. 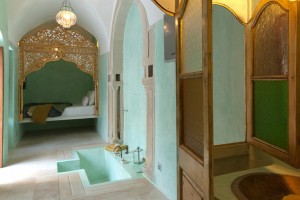 Villa Phoenicia is a divine little guesthouse on the edge of Hammamet North. Run by an Italian couple, it is a haven of calm and greenery that’s only a short, eight-minute walk from the medina, restaurants and Hammamet’s main beach. A broad, winding staircase leads up to the four guest rooms, which each has a different theme.

If you don’t mind staying a little way up the road, then we recommend bedding down at the hip Dar Sabri hotel in Nabeul. Four sumptuous suites span two levels, each looking out onto the calm, white central oasis. Pool loungers and sofas occupy the rooftop space, which is a great spot to share a bottle of wine at night. There’s also a hammam, and a very warm welcome. 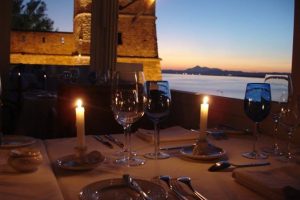 Duck through archways and climb the sanded white steps to the top of Hammamet’s ancient medina ramparts, where Le Barberousse sits. It’s hands down the town’s finest restaurant, commanding views out over the Place des Martyrs, the old city and the salt-kissed spires beyond.

With its wood-and-bamboo seating area and woven umbrellas, the Espace Sidi Bouhdid is a great place to stop for coffee and snacks when in Hammamet North. It’s located at the end of the medina, just past the parking lot, stealing the perfect oceanfront position. Sidi Bouhid does pizzas, crepes and paninis, a good selection of local teas, espressos, Turkish coffee, cappuccinos and americanos, and there’s fresh lemonade and pulpy strawberry juice on offer. There’s also an ice cream menu here, filled with classic French sundaes, plus cakes and pastries.

Next to the medina on Hammamet’s main strip, La Belle Vue is a crowd-pleaser. The food isn’t worth writing postcards home about, but it’s consistently decent, service is fast, and you can enjoy views of the medina and the crystal clear ocean while you eat.

The local airport in Hammamet is Enfidha-Hammamet (NBE), though it’s rather small and only has a few European connections. If you do happen to fly in to this location, it’s pretty easy to just catch a taxi outside the airport to your destination in the city. However, most people will probably connect through Tunis or Monastir. Private taxis are available from these airports, trips take about an hour, and the cost usually runs between 50-80 dinar. A cheaper option is to take an airport taxi to an intercity bus station or intercity collective taxi station — though it isn’t the most comfortable way to go.

Another way to get into Hammamet is via train. The best way is to take the train from Tunis going to Bir Bou Regba (Rekba), just outside Hammamet, then pick up a taxi for the remaining 6km. Bus trips are also available to Hammamet from Nabeul and Tunis.

Most of Hammamet is walkable, but if you want to go further afield — or just don’t feel like hoofing it in the heat — taxis also make a good option for getting around. Before you get in either agree on a fare, or make sure the meter is on and set to zero. Renting a car is not recommended unless you are experienced at driving in North Africa.

Weather: The city has a hot, semi-arid Mediterranean climate. Hammamet has experienced temperatures of over 115F (46C) between May and September, which is the hottest season, though average highs in July average around 94F (34C). The most popular season to visit is in the springtime, between April and June or in the fall, between in September and October.

Health and safety: The main thing to worry about in Hammamet is pickpockets, who generally stick to crowded areas in the souks. Outside of that, violent crime is uncommon. Western women often get excessive attention from men, particularly if walking alone, but it’s harmless. Just ignore it and do not make eye contact. There are various ways scammers try to get you to part with your cash, so the rule of thumb is that if an unfamiliar person approaches you and offers you a tour or deal (or pretends to know you), just say no and walk away.

There are no major health threats in Hammamet, except the possibility of sunburn and heatstroke. ALWAYS carry water with you when the weather is warm, and fair-skinned people should wear hats and sunscreen, even on overcast days.

The regional hospital is located 5km outside of town and can be contacted at 02 285022.

Money and banking: The dinar is the currency of Tunisia. You can only exchange money in Tunisia, not before you enter the country, and you can’t take any currency with you when you leave. Avoid changing money in hotels – they can charge up to 15% more than a bank. Use the bureau de change at the airport, your hotel (most good hotels offer this service), or one of the many banks in the city centre such as the Central Bank of Tunisia and Amen bank. Hotels, restaurants and larger tour companies will accept credit cards, but for smaller purchases in the souk or local shops you’ll have to use cash. Haggling is expected in the souks.

Tipping and local customs: Tunisia being a Muslim country, women are advised to cover their shoulders and legs in public areas.