Once the premier destination for Europeans looking for a safe and sunny Mediterranean getaway, travel has slowed considerably since the Arab Spring began in Tunisia in late 2010. Thankfully, Tunisia has regained most of the stability its neighbors Egypt and Libya have sought to reclaim, and the country and capital are both open and welcoming foreigners with open arms.

Medina: The medina of Tunis, a labyrinthine ancient city of tiny pathways, cobbled alleys, ancient houses and glorious mosques, dates back to the 13th century and is now a UNESCO heritage site. On sunny days, light bounces off the stone white walls, highlighting the bushes of bougainvillea nearby. The souk that’s hidden within the medina’s walls is enormous, brimming with stalls that sell everything from traditional orange blossom perfume to leather bags, round felt hats and stacks of sunglasses.

Zaytuna mosque: This massive mosque is the oldest in Tunis and covers over one acre of land. Originally built in the 8th century, parts have been reconstructed over time. The 160 columns you’ll see on the premises were originally transported from Carthage and the mosque itself was one of the first centers of Islamic learning. 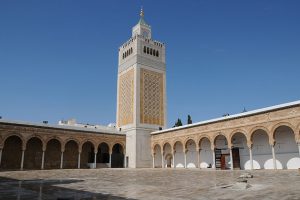 Carthage is the top attraction and probably most interesting thing in Tunis: the ruins of this vast ancient empire still stand in stark tribute to the city-state’s former splendor.

The charming seaside town of Sidi Bou Said is a mere 20 km (12 mi) from Tunis’ old center. Known as the blue and white town, its buildings are painted in remarkable shades of said colors, similar to Chefchaouen in Morocco. A short light rail or bus ride away, Sidi Bou Said is the perfect place to escape the cramped, bustling city for a few hours.

The Bardo Museum is consistently ranked as one of the top sites in Tunis and for good reason, too. Constructed in the 13th century as the residence of an Ottoman bey (local ruler or administrator), the building itself is impressive enough. Once inside though, you’ll be amazed at the extensive and fascinating collection of Roman, Greek, Phoenician, Ottoman, and Arab works, in particular the breathtaking mosaics dating back thousands of years. 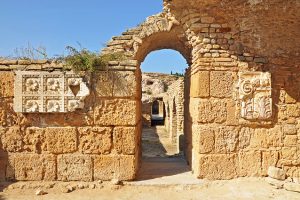 The Dar Ben Abdullah is Tunis’ other great museum. Set in an Ottoman palace dating to the 1700s, this folk museum in the old medina takes a deeper look at the lives of the merchants and traders that inhabited Tunisia through the Ottoman era.

When Tunisians who live in the capital go to the beach, they head to La Marsa. A half hour’s drive (or forty minutes by tram) from downtown Tunis, La Marsa’s blanket of golden sand is flanked by beach restaurants, a shiny shopping mall and upmarket whitewashed homes. If you’re hoping for camel rides, banana boats and paragliding you’ll find La Marsa a little tame, but it’s a great place to sink your toes into the sand and share a picnic with friends or family on a weekend afternoon. There is a sun lounger spot about halfway along the beach; you can rent two or three loungers and bamboo umbrellas for the afternoon for about 8 dinars. Up on the promenade, salesmen sell popcorn and ice cream from mobile carts. 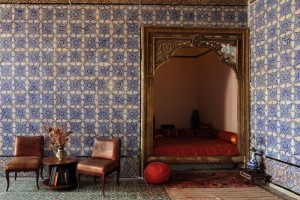 Dar hotels are hot in Tunis right now; they are Tunisia’s answer to the Moroccan riad. Larger than guesthouses but smaller and more personal than boutique hotels, these resplendent conversions of traditional family homes, palaces, or buildings centered are around a communal courtyard. Some standouts include La Chambre Bleue, which is housed in a former 19th century palace. This guesthouse that brings together buildings once used for housing princes, slaves and ancient guests. Owners Sondos and Marwen have transformed it into a hip dar hotel with sumptuous alcove beds and spectacular gold ceilings. Guests come together for delicious, shared breakfasts in the courtyard nook. Dar Said is a whitewashed, windblown dar with curved bathrooms and snug sleeping quarters that sits high above the rocky beach at Sidi Bou Said. Breakfast is served in the communal courtyard, while up on the roof, guests sink into the hot tub or catch rays beneath the big blue sky.

If you prefer more traditional hotel accommodation, there’s the Novotel Tunis Mohamed V, a sleek business hotel near Avenue Habib Bourgiba. It has all the design features, great lighting, spacious rooms and attention to detail that you’d want from an upmarket hotel. And it’s ideal for the beginning or end of a Tunis work trip or adventure.

After centuries of influence from the Romans, the Byzantines, the Turks, the Spanish and the rest of the Arab world, Tunisian cuisine is having its moment in the sun. It mixes sweet and savory, it’s easy on the spice factor, and it’s rich, subtle and filling — and often all at once. Dar El Jeld, Tunisia’s most famous restaurant, is worth popping into just to see the sumptuous dining room with its bronze sculptures, glass chandeliers and ornate vases of orange orchids.

Dar Slah is second only to Dar El Jeld in terms of fine dining in the ancient city. But unlike Dar El Jeld, Dar Slah is affordable: its lunch menus start at USD20 and include three courses. It offers a pleasant, bustling dining room and food that doesn’t wave its culinary achievements in your face.

Slightly off the beaten path is Le Golfe, one of the capital’s best-kept culinary secrets. Located in the pretty coastal suburb of La Marsa (20 minutes by taxi from downtown Tunis), few tourists head out here to try its tables, although it scores highly with expats and affluent Tunisians. The outdoor tables are right on the edge of the golden sandy beach, flanked by dwarf palm trees for privacy. Like the views, the food here is impressive; the locavore chef swears by fresh, regional ingredients, emphasizing seafood and locally-grown green fare like spinach, capers and olives.

For nightlife, try Le Boeuf sur le Toit. This might just be one of our favorite bars in all of Africa, not only Tunisia. Named for a surrealist ballet, its name translates as ‘the bull on the roof’, giving an idea of the kind of the energetic, feverish vibe you’ll find inside. If you want to eat, drink and dance with a liberal Tunisian crowd, don’t miss Le Boeuf.

Some notable shops in and around the souk include: 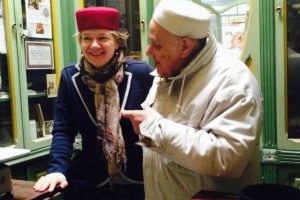 Fethi in his chechia shop (courtesy of Dar Ben Gacem)

Fethi’s Chechia Shop: since 1924 this shop has been making chechias – traditional red Tunisian hats – by hand.

La Maison des Sacs: The proprietor of this amazing little store works entirely by hand, transforming classic handbags into works of art. Unusually, he incorporates beautiful fabric into his designs and every bag is different.

Espace Diwan is a small but much loved shop in Tunis’ medina. Diwan is the place to go for gifts or to take home an authentic piece of Tunisia. Books, postcards, antique tiles, historic photos and other curios can all be found here to make sure you never forget this ancient and memorable city.

Most people fly into Tunis through the Tunis-Carthage Airport (TUN), 8km outside the city center. Several western carriers service the airport such as British Airways, Air France, and Lufthansa, making it a convenient city to get to from major European cities.

Trains are generally cheap in Tunisia and give you another option of getting into the city. It also helps that Tunis is the main hub of the Tunisian railway system. Tunis Central Station is located near Place de Barcelone and allows changes to the city’s light metro service. Frequent trips are available from other cities such as Nabeul, Sousse and Mahdia.

You can also get into the city via bus; there are two bus stations in town (Gare Bab el Fellah and Gare Bab Saadoun). Like trains, buses run frequently from other cities in Tunisia.

Yet another popular way to get into Tunis is via ferry from international destinations such as Palermo, Naples, and Marseille. The main ferry terminal is at La Goulette, but some ships dock at other terminals around the city. Be sure to make sure you know which one you are getting off at before heading into the city.

Once you’re in Tunis (assuming you flew in to the airport), taxis are available outside of the terminal vehicle and line up in a queue. Taxis into the city cost around 5 dinars, so if you are charged extra you should move along.

There is a light metro with six lines that runs throughout the city. Fares are 0,410 dinars, but if you are in town longer, you can get a one-month pass for 32 dinars. A separate light rail system known as TGM light rail has four lines that connects the ferries to destinations around the metro area.

Taxis also make a good option for getting around and get you to more places than the metro will take you. Renting a car is not recommended.

Weather: The city has a hot, semi-arid and slightly Mediterranean climate. Tunis has experienced temperatures of over 115F (46C) between May and September, which is the hottest season, though average highs in July average around 94F (34C). The most popular season to visit is in the springtime, between April and June or in the fall, between in September and October.

Health and safety: The main thing to worry about in Tunis are pickpockets, who generally stick to crowded areas in the souks. Outside of that, violent crime is uncommon. Western women often get excessive attention from men, particularly if walking alone, but it’s harmless. Just ignore it and do not make eye contact. There are various ways scammers try to get you to part with your cash, so the rule of thumb is that if an unfamiliar person approaches you and offers you a tour or deal (or pretends to know you), just say no and walk away.

There are no major health threats in Tunis, except the possibility of sunburn and heatstroke. ALWAYS carry water with you when the weather is warm, and fair-skinned people should wear hats and sunscreen, even on overcast days.

Money and banking: The dinar is the currency of Tunisia. You can only exchange money in Tunisia, not before you enter the country, and you can’t take any currency with you when you leave. Avoid changing money in hotels – they can charge up to 15% more than a bank. Use the bureau de change at the airport, your hotel (most good hotels offer this service), or one of the many banks in the city centre such as the Central Bank of Tunisia and Amen bank. Hotels, restaurants and larger tour companies will accept credit cards, but for smaller purchases in the souk or local shops you’ll have to use cash. Haggling is expected in the souks.

Tipping and local customs: Tunisia being a Muslim country, women are advised to cover their shoulders and legs in public areas.