Alexandria was for centuries a prized seaside escape for kings, pharaohs, and – for a brief period of time – Egyptian and European elite. Discovered by Alexander the Great and coveted by Cleopatra, this once-cosmopolitan urban center has grown relatively obscure following the rule of the ancient pharaohs. In spite of a brief renaissance in the early 1990s, only a few remnants of the city’s former glory remain visible. However, in many ways, it perhaps feels as though ‘Alex’ may just be on the cusp of revitalizing this Egyptian treasure.

Ancient wonders have been converted into casinos and hotels that exist alongside expanding urban slums, while other relics of the city’s great past crumble slowly into the sea. With a small amount of imagination however, visitors to Alexandria can be transported back to an era of opulence and romance that is hugely unique from other Egyptian destinations.

Alexandria sprawls along the Mediterranean, with the 15km-long Corniche promenade dividing sand from city. To gather your bearings, it is perhaps best to begin with a leisurely stroll here. With most major sites and monuments located along the promenade, an afternoon can quickly disappear as you sample sweets sold by roadside vendors and gaze out onto the numerous beach-goers. 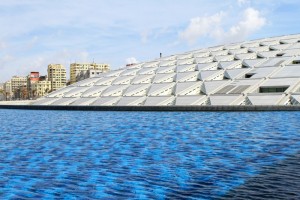 Looking across the highway, you may notice a huge variety of small book shops lining the streets. Alexandria has been a book-lover’s paradise since the 4th century BC, when the city built the Great Library and filled it with a collection of over 500 000 volumes. Constructed in a period when printed books were both rare and costly, Alexandria positioned herself as a world-renowned center for classical thinking. In 2002, the city completed the reconstruction of the new Biblioteca Alexandrina. As you wander the Corniche, you will likely notice an enormous angled discus coated in hieroglyphs and other identifiable and non-identifiable symbols. Inside, you’ll find a reading room that houses 2500 readers and eight million books, three museums, a planetarium, various rotating exhibitions and an extensive series of cultural events. Years could be spent flipping through the impressive collection of ancient books and maps; however, a half day will be ample time to wander the halls in search of the sole remaining scroll from the ancient library.

Further remnants of historical monuments are stippled along the shore. The Citadel of Qaitbay, a fortress that looks out over the sea, is perhaps the most iconic of them and houses an interesting Maritime Museum within it. Other famed monuments include: 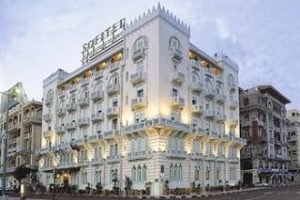 Alexandria has a tendency to offer either high-end or budget accommodation options, with only a sprinkling of good mid-range options. The city and its numerous hotels have struggled given the decline in tourism that followed the Arab Spring. As a lesser-visited Egyptian destination in general, there are inevitably great deals to be found here – assuming your preferred hotels are still in operation.

The best hotels are nearly all located along the Corniche, and offer stunning sea views to guests. Higher end hotels are generally located along the eastern shores, with much distance separating them from the old city. The most popular hotels are generally owned by international brands, and include the Four Seasons in Alexandria, two Hilton hotels Corniche and at Green Plaza, the Helnan Palestine Hotel and the Steigenberger Cecil Hotel. All these hotels and many others will accept major credit cards or cash, and online reservations can be made in advance.

Though mid-range options are limited, the Egypt Hotel is one good option located in the old city. Some locally owned smaller hotels continue to exist, but their status should be checked in advance.

Alexandria complements the traditional Egyptian fare with a great range of local and fresh seafood. Egyptian staples and flavours are often coupled with influences from Greece and the Middle East, making this city a unique culinary experience. Many of Alex’s most prized restaurants are located within the major hotels. Byblos at the Four Seasons is a definitive favourite, while La Veranda offers a glimpse into ancient Alexandria while serving French and Greek dishes.  A wide variety of international flavours are also present. You’re likely to find anything from classic Italian to American chains as you wander along the promenade.

Though restaurants are plentiful, bars and nightclubs are far more difficult to locate. The Cap d’Or – also known as Sheikh Ali – is one of the few remaining watering holes that pays homage to the city’s early 20th century renaissance. Otherwise, visitors are wise to search for alcohol and music at major hotels – Le Bar and Bleu Bar are two particular favourites both of which are located in the Four Seasons. Otherwise, slip away into the sheesha and tea-filled rhythm of the city, sipping and smoking on your favourite flavours as you gaze out across the Mediterranean.

How to Get There

The easiest way to reach Alexandria is to travel by train from Cairo. Egyptian National Railways offers high speed trains that depart hourly during the day. Traveling into Alex by rail helps transport your imagination back to the turn of the century. Buses too connect Alexandria to Cairo. Though buses are a less expensive alternative to the train, they are often slower and perhaps a little less romantic.

Alexandria is also home to two small airports, El Nouzha/Alexandria International Airport (ALY) and Borg el Arab (HBE). El Nouzha is located 7km southeast of the city center and is served by EgyptiAir Express and other national and regional carriers. As of this writing it was closed for renovation, and expected to reopen sometime in 2015. 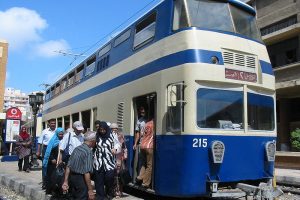 Borg El Arab is located 45km southwest of the city, with services to and from North Africa and the Middle East, plus a few European connections (Athens, Milan) on Egypt Air. High taxi prices make reaching this airport costly and difficult, and the limited flight options do little to create incentive for air travel.

The meter-less black and yellow taxis are by far the most convenient mode of transport around Alexandria – assuming you barter well – and they are generally inexpensive enough to rival public transport. However bear in mind that within Alexandria, virtually all sights and destinations are located along the Corniche, so walking is also a viable option.

If you’re feeling patient and brave, Alexandria’s tram is worth checking out. A testament to the city’s past, it was built in 1860 and hardly updated since then. It’s the oldest active tram on the continent. It snakes through the city on a convoluted route that, like the buses, are often befuddling to new visitors.

Location: Alexandria is located on the Mediterranean coast of Egypt, about 220 km (137 mi) north of Cairo.

Languages: The primary language of Egypt is Arabic, but in touristed areas many vendors and tour guides have at least some knowledge of English and often other European languages.

Weather: August is the hottest month in Alexandria, with an average temperature of 27°C (80°F) and the coldest is January, at 13°C (55°F). So bring a warm coat for winter, and wear loose, light clothing in summer.

Money and banking: The Egyptian pound is the currency in Egypt. Being a big city, banks and ATMs are abundant in Alexandria, with HSBC and National Bank of Egypt being two of the most common. Most hotels, restaurants and shops that are tourist-oriented will accept credit cards such as Visa and Mastercard (just not American Express).

Tipping and local customs: It is normal to tip about 10% at restaurants, and 5 pounds per bag to the bellman at your hotel. Hotel maids should get between 5-10 pounds per night. Spa services usually command a 15% tip.

Safety: Egypt’s safety and security has been in flux in the years since the Arab Spring. Though Alexandria has generally remained safe for travel, extra precautions are necessary. Prior to booking a trip, it is well worth consulting with local security updates and travel advisories.

While in Egypt, your safety and security can be enhanced by remaining culturally sensitive and aware. Here are a few tips:

Women in Alexandria should be wary about their beachwear in particular. Bikinis are best avoided, and swimmers may want to consider wearing a loose T-shirt and shorts when swimming.