Known as “Algiers the White” because of its beautiful white buildings that overlook the sea, Algiers dazzles all who venture here, despite being rough around the edges. The city has great tourism potential and is rich in cultural and scenic experiences, including fine beaches, beautiful mountain scenery, Roman ruins, ancient rock paintings, and desert oases.

Algiers is the capital of Algeria, Africa’s largest country, and is bordered by Morocco to the west, Tunisia to the northeast, and Libya to the east. It is situated on the west side of the Bay of Algiers, facing the Mediterranean sea. The modern part of the city is on level ground near the sea, while the old part climbs steep hills behind it and includes the Casbah, located on a triangular peninsula that juts out into the ocean.

As a city built on hillsides, Algiers boasts beautiful sea and harbour views and is brilliant for daytime walking. It was once regarded as the most beautiful port in the Mediterranean, and despite industrialisation is still a remarkable-looking city, from the pine forests of the chic quartier of Hydra, to the botanical gardens of the Jardin d’Essai, to the colonnades of the Casbah, to the souks with the Ketchoua Mosque, to the Place Emir Abdelkader (leader of the fight against the French in 1830). 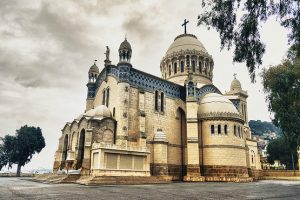 West of the Place de Martyrs, the Casbah has covered colonnades with shops selling clothes, spices and handicrafts. The narrow streets of the well-preserved medieval quarter include the grand palaces of former Ottoman-era rulers like the Palais de Rais. It consists of a number of joined waterfront houses with decorated tiles and painted ceilings, and was built by Dey Mustapha Pacha in 1789. The French used it as their headquarters in the early stages of their occupation.

Overlooking the Casbah and port is the Cathedral of Notre Dame d’Afrique, which is now reachable by cable car. It offers a remarkable glimpse into French colonial and Christian ambitions in Africa. The Gallery of Fine Arts and the Bardo Museum are also both worth visiting.

It’s well known that Algiers has had its share of political problems, particularly throughout the 1990s, and Algeria’s tragic history hangs heavily on the country and the capital. The towering concrete Martyrs Monument bears testimony to Algeria’s many dead — the civil war alone cost some 200,000 lives. The Martyrs Museum, under the monument, chronicles the sheer cost of the Algerian struggle.

Hotels play an important part in Algiers daily social life with frequent meetings and conferences covering politics and culture. Business hotels predominate in Algiers, reflecting the importance of the capital city to Algeria’s huge oil and gas industry. But there are some leisure properties as well. Here is a selection of some of the better international-standard hotels.

El Djazaïr Hotel: This four-star hotel is government owned, but is also a historic venue of character, and the common areas feature fine zelij tiles. In the 1890’s this was where wealthy English tourists came to winter, and during World War II (when it was known as the St George Hotel), Eisenhower’s headquarters were here. Churchill stayed here too. The hotel offers a superb tree-lined garden and terrace where residents and visitors can take tea or coffee. Some rooms are in a run down state, so try to get a room with a view of the garden.

Hilton Hotel: This modern five-star is the best privately-owned business hotel in Algiers. Located on the seaside, it has seven restaurants, an excellent business center, good internet connectivity, a swimming pool, a gym and a health center. It also offers good access to the airport (there is an airport bus), and the city (a 15-minute drive). The drawbacks are that the hotel’s air conditioning system can be erratic, some rooms are better than others, and service can sometimes be slow.

El Aurassi Hotel: A five-star, centrally located, Soviet-era monolith with superb views of the Casbah and the Bay of Algiers. Many high-level conferences are held here.

Hotel Es Safir: A 1930’s hotel that was opened by Charlie Chaplin. A central and less expensive option.

Ibis Alger Airport: The closest hotel to the airport, with a free airport bus.

If you don’t mind a bit of a drive, there’s also the Sheraton Club des Pins, a massive, swank beach resort located about 18km (25 mi) west of Algiers in the Club of Pines area.

Here’s a roundup of some of the best eats in Algiers, from local Algerian food, to Chinese, French, and beyond.

Getting to Algeria overland from neighboring countries is not advisable due to safety concerns at the borders.

Location: Algiers is located on the central coast of Algeria, 432 km (268 miles) from Oran.

Languages: Arabic and French are the main languages in Algiers. English is not widely spoken.

Weather: The weather in Algiers is semi-arid with hot, dry summers that can reach over (40C/110F)  and mild, wet winters with highs around (16C/62F).

Safety: Use taxis from your hotel to go to and from your location. Have them wait or call a taxi to pick you up. Do not walk on streets at night especially in the Casbah.

Tipping: Tipping is generally not necessary, but it is good to round up to the next 10 dinars.