The Réunionaise comprise a fascinating mix of cultures and ethnicities. While the Tamils on the island remain largely within their own communities, the Creoles are a blend of French, Malagasy, Portuguese, Indian and Chinese, amongst others. These diverse influences can be found in the island’s unique cuisine. To better understand the Creole plate that dominates the island’s flavour profile, Ishay Govender-Ypma spent time with a local family, cooking, eating and learning about their history.

“These are perfect bites to have with rhum,” Elourda Severin, a passionate home cook and co-owner of Le Grand Pavois Gîte in hilly Les Avirons, says of the tiny fish and masala samoussas we fold and fry, one plateful at a time.  “And we have some of the litchi rhum from Christmas,” her husband Yves says, as he passes around generous shots of the home brew, poured neat. In Réunion Island, a volcanic mass floating between Madagascar and Mauritius on the east coast of Africa, rum is a big deal. Locals are proud of the tradition of homemade rum, and roll their eyes just a tad when you enquire if it’s anything like Mauritian rum. The correct reply would be to tell a local that it’s infinitely better. We smile, and munch on the triangular pastries – it’s hard to stop, but we must. Elourda is preparing a Creole spread for dinner, opting to use the wood fire in the kitchen. 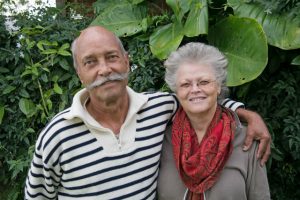 The food, she says, never has the same flavour unless cooked on a wood-fire. All the locals I chat to during my stay say the same. Smoke collects in the kitchen until it swirls in a haze around our noses and stings our eyes, but Elourda stirs the pots, humming a little, oblivious to the build-up. I open the kitchen door for some air, and sneak outside, admiring the commanding view down onto the Bay of Etang-Salé. The elegant double-story house stands proudly in garden of herbs, fruit trees, and parked around the corner are two classic cars in superb condition. This is Yves’ hobby, Elourda tells us earlier; he’s reconditioned them and enjoys a slow Sunday jaunt. Vega, the Dalmatian cross, sniffs at my ankles, offering kind eyes and a cheeky tongue. It’s crisp and cool here, high up in the Blackwood forests, and not something one would expect of a tropical island. In fact, every 20 minutes travelling on Réunion Island can take you into one of the almost 200 micro-climates. Bear in mind the island’s surface covers just 63 kilometers across the longest point, and 43 kilometres in width. Small island, too many seasons.

Outside the kitchen, over sips of rum, Yves tells me about the Creole community he grew up in. Yves’ ancestors on his mother’s side can be traced to the Anglo-Indian women from Goa who arrived as brides around 1763. (When I ask Elourda about her roots, she laughs and says, “I am endemic!” And lists Malagasy and French ancestors). Generally, anyone born on the island, a foreign department of France, is considered Creole, irrespective of ethnicity. But, in terms of precise classification, the Creole-heritage population is a combination of French, Malagasy, Indian, Portuguese, Chinese and others. Grasping this is essential if you’d like to get a more intimate understanding of the culture in Réunion, and consequently, the food.

Locals are very proud of how integrated their cultures are, and seem to be open to discussing the layers and complexities that establish identity — often at the first prompt. 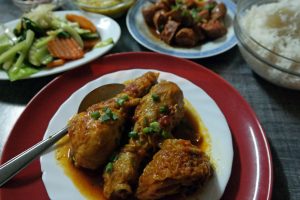 Chef Marc Chappot of the Blue Margouillat, one of the finest restaurants on the island, refers to the food as “blended, from the heart.” Yves and Elourda agree. Flavour is built using several types of ginger roots, along with makrut limes, carcuma (turmeric), chillies and locally grown herbs like quatre epicés (all spice leaves), kaloupilé (curry leaves), cilantro and aya pana leaves. The most popular dish all through the island is cari (curry), the Creole kind that is less spicy than the Indian version. Everything from tenrec (a local type of hedgehog), wasp larva to wild duck with vanilla, pork trotters, smoked pork, chicken and mussels can be made into cari. Cabri massalé or goat curry is the famous dish on the island made by the Indians who classify themselves as Tamil, having descended from the Tamil-speaking south of India. The unifying spice blend on the island seems to be garam massalé, or garam masala, a warming blend made with ground coriander, cumin, cloves, cinnamon and nutmeg. Every family will have their own recipe, and Elourda has one she inherited from her mother. “It’s a secret,” she winks.

“All caris must cook for a long time. It’s best for flavour,” offers Elourda.

Inside the kitchen we enjoy baked stuffed chouchou, a type of marrow that grows in abundance here, smoked sausage rougail (“Homemade sausages are the best,” says Yves), zamboukal – a type of local pilaf, with thin potato slices and chicken and brede (a green leaf) stir-fry. The latter is popular across the country, representative of the Chinese population. Chinese-Creole diners aren’t hard to find; the best ones are often the small roadside eateries that serve honest, unadorned food to workers. The Euro is the currency, as it is in France and the roadside Chinese diner is often one of the more cost effective meals on the island, second to the food carts and markets.

The couple’s 20-something son, Sebastian, returns from the pub, smiling at us shyly when he hears English being spoken. Elourda piles food on a dinner plate for him, inviting him to join us at the table. We’ve just gotten to the sweet-potato gateaux, a rich and heavy beloved sweet-treat made with sweet potato, butter, eggs, vanilla and rum. I have to keep some of mine aside for breakfast. Sebastian tucks in with gusto – clearly no fast food or bar snacks can compare to mum’s cooking. 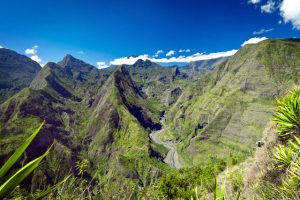 He mentions the time he went to the mainland (locals call France the mainland), telling the men at the factory he was working at that he was French, which is what locals consider themselves. “I’m French Creole,” you will hear them say and many say they don’t feel a bond to the African continent, but rather to Europe (or Asia). Sebastian was mocked and thought of as a foreigner when he worked in France – a Kanak from New Caledonia, they called him, perhaps because of his light brown skin. He tells us he was confused by this, and then hurt; he never felt at home on the mainland, so he returned. His father has a similar story, even as a high-ranking officer who fought for the French army.

We drink coffee and Yves shares, “It just meant we had to work harder, to be the best, as perfect as we could. Sometimes it made me mad, but I used that emotion to prove my worth. This is our place in the world,” he says, gesturing to the space around him.

“We are Réunionaise. This volcano is our home.”

Elourda tuts under her breath, sighs, and then smiles. I help her to gather up the plates, and thank the family for letting us into their home and sharing more than just food.

“You know, “ Yves continues, “The world is getting more and more blended. Like us. The challenge of dealing with mixed cultures and figuring out your identity, your place in the world, it’s with the children of the future.”

He looks at Sebastian, who nods, gives his mother a kiss and wishes us good night.

I start to piece that culture, identity and cuisine in Réunion Island are not just inextricably linked, but far more complex than a restaurant meal or a street-food cart will ever allow the eater to understand, or partake in.