The Zanzibar archipelago, which lies just 40 km (25 miles) offshore from mainland Tanzania, is a semi-autonomous region with a vivid history and culture that blends African, Arabic and Indian influences into one mesmerizing masala. The masses love to visit for the famed beaches, but the islands are also home to World Heritage sites, bountiful spice plantations, memorable music, amazing animals, and fantastic festivals.

Zanzibar consists of three main islands and several smaller ones. Unguja, commonly referred to as Zanzibar, is home to most of the beaches, plantations, historical sites, and tourism. Pemba, about 50 km to the north of Unguja, offers mostly secluded beach resorts. And Mafia Island, which is about 150 km south of Unguja, is the least-travelled and least-developed of the three. 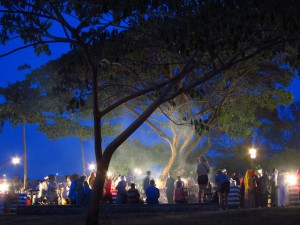 Stone Town: At least one day should be spent exploring the heart of Stone Town, which is the old section of Zanzibar City on Unguja. It is made up of ancient stone houses, palaces from the Omani days, carved wooden doors, and a treasure trove of bazaars and galleries. The most efficient way to see this UNESCO World Heritage city is on a walking tour. Famous landmarks include the Beit al Ajaib or House of Wonders, the Palace Museum, the Old Fort, Forodhani Gardens, and the Nasur Nurmohamed Dispensary. In the Hurumzi neighborhood you’ll find countless small shops offering a tempting array of textiles, carvings, and paintings that beg to be taken home as souvenirs. The Mkunazini area is home to the majestic Anglican Cathedral, next door to which are slave-holding chambers that serve as a sobering reminder of one of the darker sides of Zanzibar’s history.

Spice plantations: Cloves, cinnamon, vanilla and other spices gave the Zanzibar archipelago its historical reputation as the “Spice Islands.” Almost all hotels can arrange spice tours, during which you can visit nearby plantations and see (and often sample) the spices at the source. In addition to smelling and sampling the spices, most also offer the chance to taste some of Zanzibar’s many tropical fruits — mangos, jackfruits and more — and to buy spices to take home with you. The tours take two to three hours, with pick-ups and drop-offs at your hotel. Costs average from US$15 to US$30 per person. 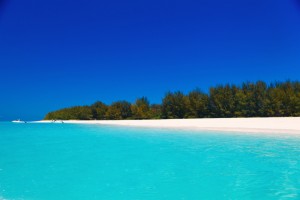 Beaches: On Unguja there are several beaches just a short drive to the east or north of Stone Town. A favorite is Matemwe, which boasts a long, wide beach and fine, powdery sand, and is a popular kite surfing spot. Kiwengwa, south of Matemwe, features a string of lovely beaches, plus attractions such as beachside horseback riding and fascinating underground caves. Jambiani, southeast of Stone Town, has a wide beach backed by a large selection of mostly moderately and budget-priced hotels. Just up from Jambiani is Paje, which is one of East Africa’s kitesurfing hubs. North of Matemwe, at Zanzibar’s northeastern tip, is Nungwi. This narrow strip of gorgeous beach is perfect for incredible snorkeling experiences, and is adjacent to the quaint town with its bustling fish markets.

Just off the northeast coast of Zanzibar, the small island of Mnemba has arguably some of the whitest sand beaches and bluest waters in the world. It is private, however, so you have to be a guest of the Mnemba Island Lodge to access it.

Watersports: As expected, all manner of watersports are well represented on Zanzibar. Diving, snorkeling, and dhow tours are a way of life here, but you can also kayak, kitesurf, and parasail at various resorts and centers. The snorkeling and SCUBA diving offshore from Mnemba and Pemba is outstanding, and many tourists come to the resorts on those islands expressly for the purpose of diving.

Zanzibar is home to numerous annual festivals and events. The most well-known is probably the Zanzibar International Film Festival. Described as one of the largest multidisciplinary film festivals in Africa, this annual event has been held for eight days every June since 1997 in Stone Town. Nearly 100,000 nationals and internationals flock to take part in the music, lectures, workshops, and screenings in Zanzibar City’s Stone Town and in rural villages. The top film every year is awarded the Golden Dhow Award. ZIFF is part of the Festival of the Dhow Countries, which celebrates the arts and cultures of the African continent, India, Pakistan, Gulf States, Iran and the Indian Ocean islands.

The Sauti za Busara Festival, held every February, is perfect for those who have an interest in Swahili music, dance, and culture. It is one of the most lively events on the island, and draws several dozen acts from all over Africa. as is the festival of Eid al-Fitr, which marks the end of Ramadan and involves days of feasting and dancing.

Zanzibar boasts a robust dining scene, with everything from swank seaside eateries to hole-in-the-wall samosa stalls. The cuisine is ethnically diverse and heavy on meat, with restaurants featuring a lot of fresh seafood, Indian spices, and barbecue. Here are some suggestions from Zanzibar (Unguja) island.

Archipelago is reputedly the busiest restaurant in Zanzibar. Chef Masoud Salim, who was born and raised on the island, knows just what to do with local ingredients, presenting them in simple but creative dishes like the spiced tea, or the swordfish and curry. The restaurant also offers gorgeous views of the beach and harbor.

Radha Food House is an unassuming spot with an all-vegetarian menu that is mostly Indian-inspired, featuring authentic meals like thalis — a style of eating in which small, round bowls are placed around the table and shared, usually filled with rice, dal, vegetables, yogurt, chutney, roti, and more.

If you’re looking for authentic Zanzibari food and experience, look no further than Sambusa Two Tables, a family-run establishment set in an actual home. The name says it all: this is literally two tables in the back of a house. Bring your appetite and sense of adventure because this will be a multi-course meal that you don’t have much say in. The family just cooks up the best dishes possible with the freshest, seasonal ingredients.

Monsoon offers the true Swahili experience with floor-cushion dining, stunning décor, and live Taraab music. Its cocktails are not to be missed, with fresh juice squeezed upon request. The dishes are vibrant and generously sized. Its known for its seafood, such as octopus cooked in fresh coconut sauce or tuna vegetable kebabs with mango-papaya salsa.

Mercury’s is an oceanfront restaurant and grill in Zanzibar is named after Queen vocalist (and native son) Freddie Mercury (born Faroukh Bulsara). It’s a favorite among those looking for a cocktail at sunset. The restaurant puts on a beach bonfire every night and features live music Wednesday through Sunday evenings. The chef serves up super-fresh seafood in simple ways that highlight the ingredients. Most dishes are a variation of grilled or steamed seafood accompanied by fresh vegetables.

From about 5:00 pm onwards, Zanzibaris and visitors alike gather at Forodhani Gardens to watch the sun set over the water, chat and sample food from the many vendors who set up tables each evening heaped with local delicacies. These include grilled seafood kebabs, soft, thick mkate wa ufuta (sesame naan bread), filling Zanzibari pizzas (a concoction consisting of a chapati around a filling of minced, spiced meat and egg) and much more. 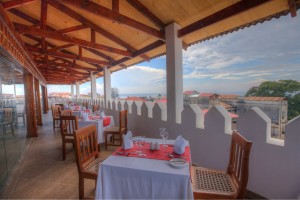 There are over 250 hotels, resorts, inns and guest houses throughout the islands of Zanzibar. Ranging from swank, secluded beach retreats to hip urban hangouts, there’s a room for every taste and budget (but less at the low end). The big international brands such as Serena, Hilton, Melia, and Park Hyatt are well-represented, but it’s possible to find boutique and owner-operated properties as well.

DoubleTree by Hilton – Stone Town: Located on the waterfront in the heart of the old city, this brand-new hotel features guest rooms and suites decorated with traditional hand-carved furniture and featuring 40-inch TVs, ergonomic desks and free Wi-Fi. There is also an elegant rooftop restaurant, a casual cafe, and a conference center onsite. DoubleTree also has a resort in Nungwi, which sits right on Nungwi beach.

The Zanzibar Coffee House Hotel is located in one of the oldest buildings in Stone Town. Originally built by the Wazir to Sultan Said Bargash in 1885, it has since been transformed into a stylish hotel with harmonious interiors, antiques, rich fabrics, and an authentic Arabic atmosphere.

Dolphin Bay Resort is located on the southern tip of the Zanzibar island, close to the village of Kizimkazi. This family-friendly property has 3-bedroom villas, many with private pools, and is near the starting point for dolphin excursions and whale-watching trips.

The thatched cottages of Ras Nungwi Beach Hotel overlook the crystal blue waters of the Indian Ocean at Nungwi beach. Most cottages have four-poster beds with tents over them, locally made furniture, and some have staircases that lead directly from the hut to the beach. The property also features several gorgeous walking gardens.

On Pemba Island, the swank 17-room Manta Resort unveiled a bedroom that sits 4 metres (13 feet) under the surface of the Indian Ocean. It is part of a three-story suite that floats 250m (820 feet) offshore in “the blue hole,” a circular clearing within a coral reef. The bedroom has eight windows that allow for 24-hour viewing of critters such as trumpet fish, squid and octopus.

The ferry is the classic way to reach the main island of Unguja, but most visitors these days arrive via small plane. The short flight offers some lovely vistas approaching the island as the water changes hue from dark blue to turquoise to aqua around the small islets offshore.

The fast ferry from Dar es Salaam takes about two to two-and-a-half hours. It leaves from the Dar Seaport, and arrives at the Zanzibar Ferry Terminal in Stone Town. There are normally four ferries per day, and the cost is about US$25 each way.

As there is no public transit in Zanzibar, tourists must rely on private taxis, or daladalas (shared minibus taxis) to get around. Renting a car is also an option, and there are car rental offices in Zanzibar town and the airports. Hotels can also arrange a rental for you, but they may charge a commission.

Languages: Almost all Zanzibaris speak Swahili and English. Some also know some Italian and French.

Money and banking: Visa and MasterCard are accepted at most upmarket hotels, but it is best to confirm this in advance. ATMs, for accessing Tanzanian shillings with your credit or debit card, are found in Zanzibar Town. US dollars are also accepted many places. Haggling is expected in most places, except transactions in restaurants and hotels.

Weather: The islands are hot year round (between 22-32 C/ 71-90 F) with some rain in November, and also from March through May. Cooling breezes from the ocean somewhat offset the heat of the equator.

Local customs: Zanzibar is 99% Muslim, which means men and women should dress modestly when not on the beach, and refrain from showing affection in public. Discretion is advised when drinking alcohol, and during Ramadan it’s considered rude to eat and drink in public during the day.

Safety: Despite the fact that there is occasional street crime (muggings and robberies) and there were a couple of isolated bombs at hotels and restaurants in Stone Town (by Muslim separatists), tourists continue to flock to Zanzibar, which has not seen a downtown in visitors. Those who are especially cautious can opt to stay at an all-inclusive resort and not leave the premises. But even if you opt to roam the islands freely, your chances of being a victim of crime or terrorism are probably about the same as they are in any other large city (such as London or New York).