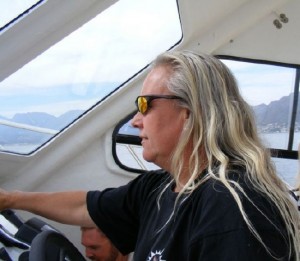 From a young age, Kim “Shark Lady” McLean had an affinity for the ocean. After completing her schooling, Kim applied to South Africa’s Department of Sea Fisheries to become a technical assistant. Her work gave her experience in various sections, including pelagic, demersal and southern oceans. The Department had previously not allowed woman at sea, yet Kim’s passion and determination beat the odds and soon she became the first woman to join the research teams at sea. Kim was such a valued member of the Department that she was sent on missions as far as the Antarctic, and on the maiden voyage to Marion Island.

Kim remained with the Department of Sea Fisheries for six years, qualifying as a technical assistant in oceanography. Working with Dr Leonard Compagno at the South African Museum, Kim assisted with research on Great White Sharks. Her love for these creatures continued as she moved on to work with the White Shark Research Project, where Great Whites were tagged. Her work with sharks led Kim to realise how misunderstood they are, inspiring her to teach and inform others of their valuable role in the eco-system.

Kim had a lifelong dream to pioneer shark cage diving tours, finally realising her vision in 1992, when she founded Shark Lady Adventures in Kleinbaai, Western Cape. Shark cage diving adventures are intimate and exclusive – quality and not quantity. This means that no pressure is put on the sharks, nor on the people who come to see them. 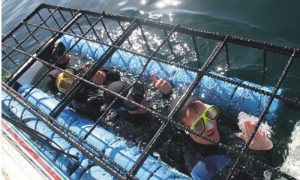 Kim and her team have taken thousands of people on shark diving trips, including world-famous celebrities (such as Rihanna)! Sharklady Adventures is also the founding sponsor of Shark Bay Research, a trust dedicated to conducting ground-breaking research on Great White sharks.

Shark Lady Adventures offers exclusive trips twice daily, and is committed to marine conservation and education too. You need not have experience diving, as the adventure team will teach you everything you need to know. There are even special rates for children, so you’re encouraged to dive as a family and experience these incredible apex predators together. Shark cage diving has to be on most bucket-lists around the world because it is such an exhilarating experience.

These powerful creatures are lucky to have someone like Kim and her Shark Lady Adventures team looking out for them and teaching the public about their importance.