Me ken lecken di finger (it’s delicious and exactly how it sounds)! With Hanukkah soon approaching and hipsters storming the Jewish delis of New York, Jewish cuisine is becoming more and more popular. From an old-fashioned deli, to a kosher bakery, to Bubbe’s kitchen, here are 15 Jewish foods you should definitely try out. 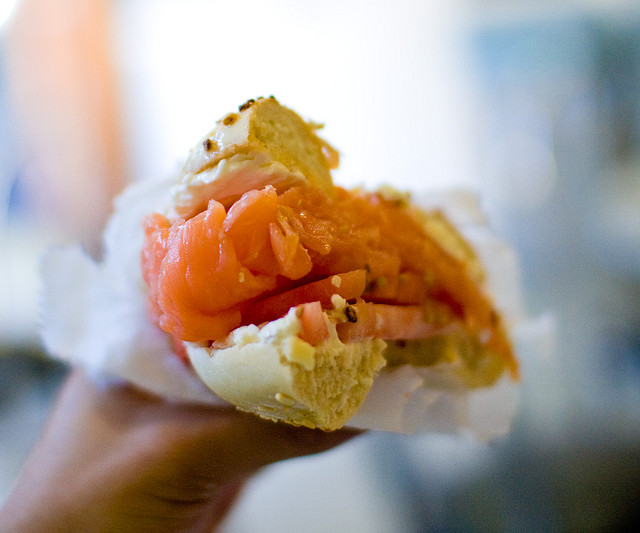 The bacon of Jewish cuisine, lox is a brined salmon that can be served on a bagel with cream cheese. This salmon can be garnished with tomaotes, onions or capers. Many Jews will tell you that there are two ways to eat a lox on a bagel: as a sandwich or open-faced. Lox can be prepared in several fashions such as Scottish (milder, less fishy taste), Nova (fishier taste), or Gravlax (spiced). Some people love this treat so much that they will eat the plain lox straight up instead of accompanying it with bread. However, it’s suggested when eating lox, be sure to use a fork because it’s fishy smell will make your fingers reek for awhile. 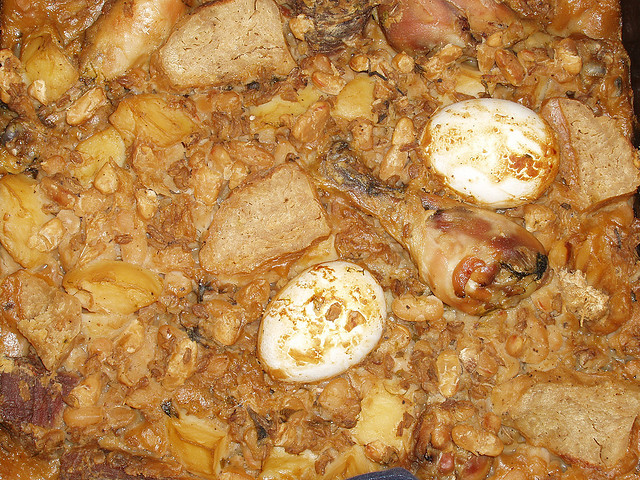 A Jewish stew where you can feel love in every bite. Savta knows that a good cholent takes real dedication. Cholent has to be simmered for no less than 12 hours and consists of kosher meat, potatoes, beans and barley, making this an iconic Shabbat meal. The stew has been simmered for so long that every ingredient melts together and falls apart beautifully in your mouth. Yum! Oh by the way, go easy on the portion to reduce the gaseous aftermath (oy vey, but worth it). 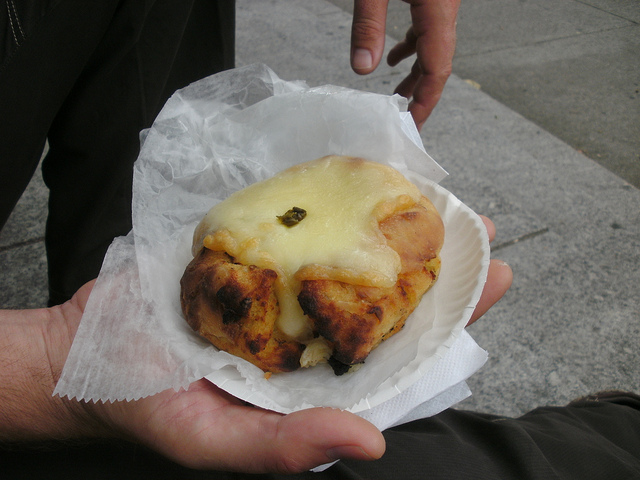 A knish is a potato dumpling designed to make you cry happy tears and dance like Topol. Many grocery stores will sell pre-frozen knishes but it’s nowhere near as good as a fresh-baked warm knish off the streets of New York. Knish can be stuffed with many options: the traditional mashed potato, sauerkraut, hot dogs, ground meat, cheese, kasha (buckwheat), tofu, onions and much more. 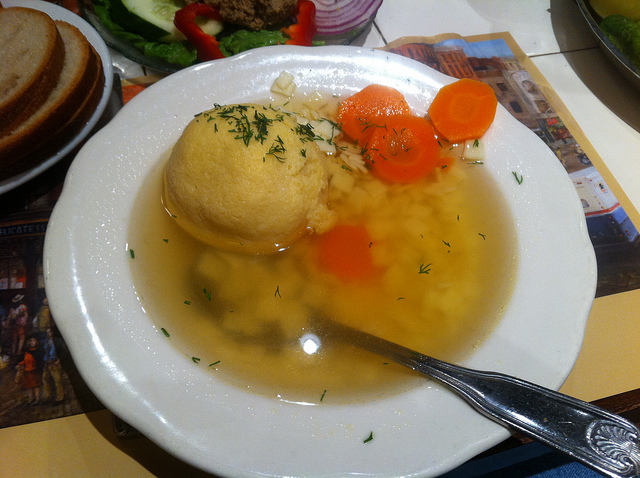 Bubbe knows the best way to your heart is through your stomach. This hearty soup is the perfect antidote for a cold winter day. Many Jewish people will serve a small portion of the soup as an appetizer, but true matzo ball lovers will have a giant bowl as the main entree. Matzo ball soups can be served with tiny balls or one large ball for you to break down with your spoon (and it’s the only time you won’t get into trouble for playing with your food). 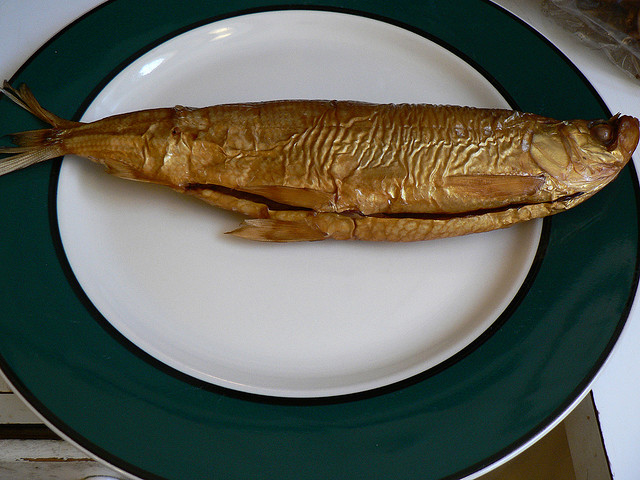 Prepared in various ways, whitefish can come in compressed ball (gefilte fish), a salad (to use as a schmear), or a whole fish. If you’re already sold on lox or stinky fishes, chances are, whitefish will be your new best friend (and a real mensch). 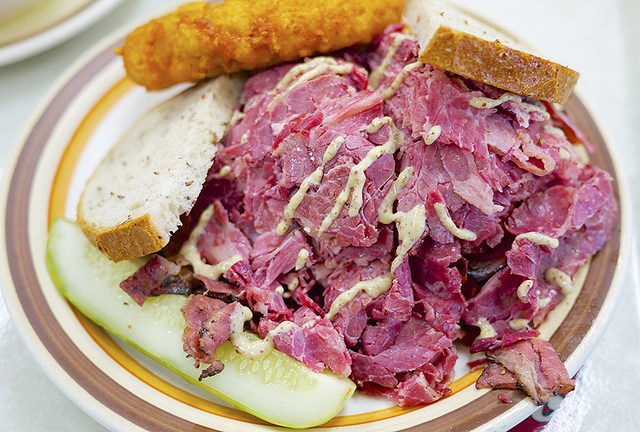 If your corned beef or pastrami does not sport enough pinkish hue on your plate, send it back! True pastrami and corned beef sandwiches should come with rye bread and piled high with layers of meat enough to make you look like a Jewish crocodile every time you take a bite. And if your sandwich does not come with a kosher pickle on the side, kvetch immediately! 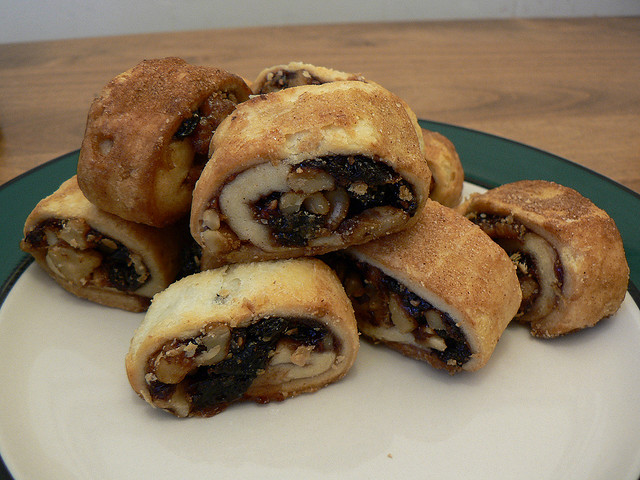 Yiddish for “little twists” (how cute), rugelach is a proven delicacy for those with a sweeth tooth to get all verklempt! You can choose any flavors of rugelach you want from cinnamon, raspberry, poppy seed, chocolate or raisins. 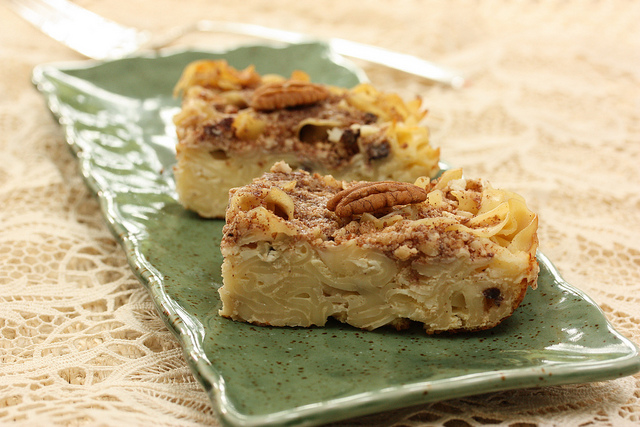 The name is often mistaken for a pelvis muscle, kugel is a noodle casserole that can be cheesy or sweet — and can be cooked with cottage cheese, potatoes or cheese curds. As an alternative sweet, Jewish cooks add raisins, cinnamon and sugar to make it into a dessert. 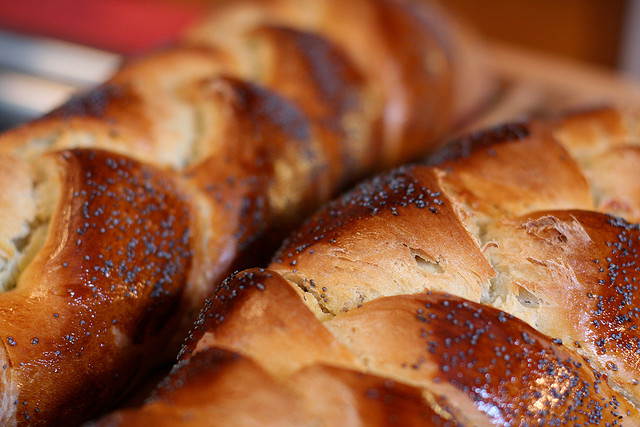 This egg bread is so delicious that it’ll make you challah back! The rich flavored bread has a pillowy soft inside and a crusty outer layer makes challah the perfect accompaniment piece to go with your Jewish meals. Many Jews will use pieces of the bread to sweep up the leftovers on their plates and fork the delicious absorbed remains into their mouths, savoring every last bite. 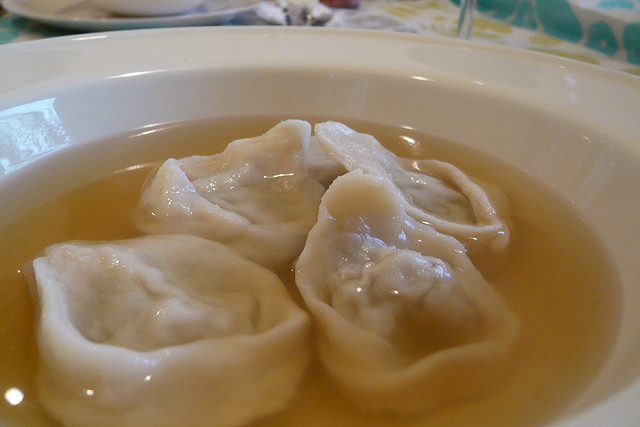 An alternative to matzo ball soup, kreplach makes a meaty substitute. The small dumplings are usually filled with ground meat or mashed potatoes and soaked in a chicken broth soup.  It’s the Jewish equivalent to Chinese wonton soup (sans MSG). 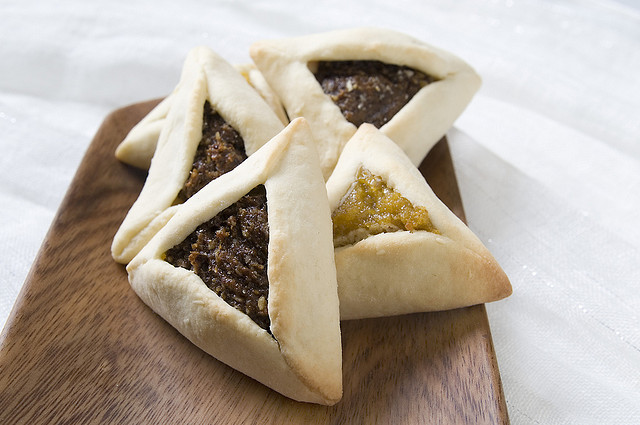 You name it, they’ll have it folded up in a cookie. From poppy seeds to dried fruits to nuts, hamantaschen usually comes in a triangle form with dough to tuck in the main ingredient. These cookies are usually served around the holidays, but many Jews know better –why wait when you can eat them year round? 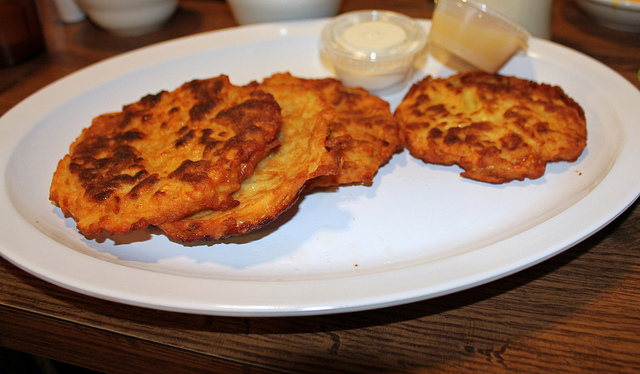 Every Jew truly misses home-made pan-fried latkes. Consisting of potatoes, flour and egg, latkes can be eaten with a schmear of sour cream or apple sauce. If you give latkes a chance, beware, it might convert you away from waffles, hash browns, and pancakes. 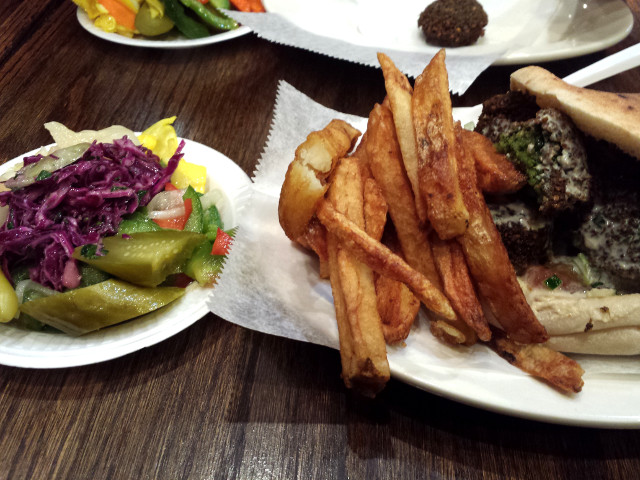 A traditional meal found in many countries including the Middle East and Greece, falafels are considered to be a vegetarian delicacy. Every country serves their falafel a little differently so it’s an absolute must to sample a falafel from an Israeli Jewish restaurant. Israeli falafels are usually served with a fluffy warm pita, and few pieces of crunchy, yet soft inside falafel pieces. If your falafel is not green when you bite into it, it’s an imposter falafel and this should upset you. Israeli falafels also have a plethora of toppings to choose from for your pita from pickled vegetables, babaganoush, and cilantro. With a genuine falafel at hand (pun intended), every bite should be pure heaven. 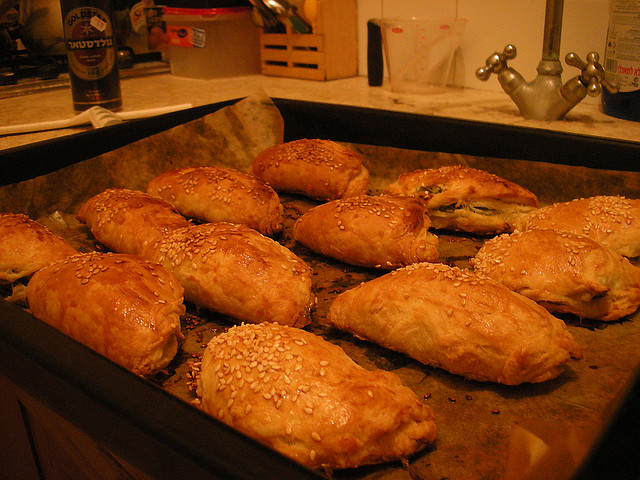 Like the falafel, burekas can be found in multiple countries prepared in many ways. Burekas are usually filled with ground meat, potatoes, or vegetables and baked with perfection. To finish it off, many Jews will sprinkle their dumpling with sesame seeds.

If your child doesn’t like vegetables, try giving him/her some tzimmes. This dish involves chopped carrots, raisins or prunes and can be drizzled with honey, cinnamon or sugar. Your kid will be begging for another bowl and have spectacular night vision before you know it. 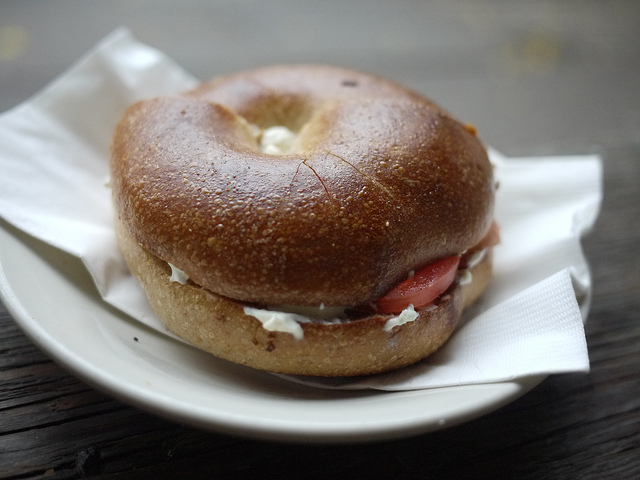 New York Jew, Mel Brooks once said “A real bagel, you give it a name. You call it Larry, or Murray. Because it’s gonna be with you for awhile.” Real New York bagels should have that rough chewy texture that gives you a tear-away jerk reaction every time you bite into your bagel. An authentic bagel should have that shiny coat  and a hole that should squeeze tightly if you stick your index finger through it. If you grew up on Lender’s bagels, we’re sorry to tell you this, but your life has been a lie.