The primary reason visitors come to Giza lies at the western end of its main drag: Pyramids Road. There, on the Giza Plateau, are the iconic royal mortuary and sacred structures known worldwide: the Great Pyramid of Giza (the only one of the Seven Wonders of the Ancient World still mostly intact), the Great Sphinx and other large pyramids and temples of an extensive ancient necropolis.

Located about 20 km (12.5 miles) south of Cairo along the Nile River, Giza is the third largest city in this North African country with a population just over 3 million (both Alexandria and Cairo are larger). It’s about halfway between Cairo and the ruins of Memphis, the ancient capital city of the first unified Egyptian state. 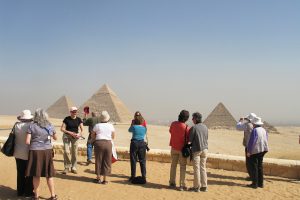 Guarded by the Great Sphinx, the Giza plateau is dominated by the massive pyramids of Cheops, Chephren and Menkaure. Plan to visit first thing in the morning. By 10:30 a.m. the tour buses start arriving and things quickly become crowded. After dark, a popular Sound and Light show interrupts the night. Open daily, it’s a Supreme Council of Antiquities site with various admission tickets depending on which specific places you’ll be visiting.

The Grand Egyptian Museum was expected to open in Giza in 2013, but the political turmoil of the past few years have pushed back the timetable. When completed, the extensive collections of Cairo’s Egyptian Museum, built in 1902, will be reinstalled here.

Landmarks in the Dokki district of Giza are about 40 foreign embassies. It’s directly across the Nile River from downtown Cairo.

Agouza, north of Dokki and south of Mohandesin, is home to the Egyptian National Circus and the Balloon Theater, both on the Agouza Corniche.

Mohandessin is considered one of the most expensive neighborhoods and is known for its shopping, eateries and cinemas. Among its famous residents was Nobel Laureate for Literature Naguib Mahfouz.

An oasis of greenery in a desert country, the Giza Zoo — the oldest in Africa — has been under stress because of the political turmoil in the country.

Cairo University was moved to Giza in 1924. As a result, the city is a hub of education and educational services not only for Egypt but also for the region. Also found here are the Cairo Japanese School and the the German-language school DEO Kairo.

As befits a “wonders of the world” tourist destination, five-star chains are well-represented in Giza.

Closest to the Pyramids is the Mena House Hotel, a luxury property founded in 1869 and surrounded by 40 acres of gardens.

A bit further away (but still within walking distance) the Mercure Cairo Le Sphinx offers pyramid views from (some of) the guest room windows.

Le Meridien Pyramids Hotel & Spa, also near the pyramids, has an “Unlock Art” pass for each guest that gives access to the Museum of Egyptian Modern Art.

Four Seasons Hotel Cairo at the First Residence, much closer to downtown Cairo than the pyramids complex, is just west of the Nile and east of the Giza Zoo.

Because of the continuing political crisis, upscale restaurants are having a tough go of it. Before heading out, check with your hotel concierge to be sure your dining choice is still open — and remember that the restaurants in your hotel (or another hotel) are a viable alternative.

Great views of the pyramids and local cuisine in a relaxed atmosphere draw diners to Sehraya Cafe & Restaurant. Flying Fish, on the Agouza Corniche, gets rave reviews for (no surprise) its seafood — especially the Flying Fish Soup — a meal in itself.

A bit west of Giza, Ovio in 6th of October, Egypt, is famous for its European menu (especially the sumptuous desserts — Esterházy Cake, anyone?).

If you’re looking for something quick, the fast-food outlets along and just off Arab League Street in Mohandessin offer a range of choices from Chicken Tikka to the pizza at Maison Thomas.

Giza is about a 30-minute cab ride from Cairo International Airport. Dozens of international airlines fly directly to Cairo from Europe, Asia, North and South America, and other parts of Africa. You can either hail a cab when you arrive, or arrange a transfer in advance with your hotel.

Both Line 1 and Line 2 of the Cairo Metro go from downtown Cairo to Giza. With Line 1, exit at El-Malek El-Saleh and walk west across the bridges. If you take Line 2 (the first subway to tunnel under the Nile), exit at Faisal. Most visitors prefer taxis; just be certain to negotiate the fare before you get in the cab.

Safety: In Giza, both Dokki and Mohandessin are considered affluent areas, but as in any part of Cairo (especially with the current unrest) remain alert and aware of your surroundings. If your instincts say “dodgy”, it’s probably best to bypass that street or shop. Women should not walk alone anywhere after dark.

Expats and visiting foreigners are common sights in Giza, but that doesn’t mean a respite from the touts and other scam artists. Ignore would-be tour guides, avoid camel jockeys around the pyramids, and walk the streets with purpose. An insistent “What are you looking for, mister” can be met with a cool smile and “oh, nothing really.” Keep walking.

When you need a taxi, ask your hotel doorman to arrange a ride that will actually get you where you want to go. Be sure to take a business card from your hotel with its name and address written in Arabic to smooth the return trip.

Local customs: Egypt is a Muslim country, so nightclubbing and alcohol consumption are officially verboten and therefore (outside branded hotels) rife with corruption. Modest dress is appropriate, which means no shorts for men or women, and nothing sleeveless or low-cut.

Tipping: Tipping is a way of life in the Middle East. Discuss the current range with your hotel concierge. Since the 2013 coup, many Cairenes have become dependent on baksheesh for their livelihood. Tips for services rendered are expected from presumably wealthy foreigners, for most common services (such as when the doorman obtains a taxi).

Money and banking: Egyptian currency (the Egyptian pound) is available at exchanges and ATMs in the airport and at Cairo’s many banks. Credit cards are accepted in tourist-centric venues, but not by local vendors or in the bazaars.

Telecommunications: Buy a SIM card for your unlocked mobile phone from Vodafone Egypt, Mobinil or Etisalat.