Known as Morocco’s “white city,” Rabat has a relaxed, unhurried ambiance, not unlike a welcoming university town. It has much to offer tourists, and is a great place to get the feel of Morocco before (or after) travelling to Fez and Marrakech. 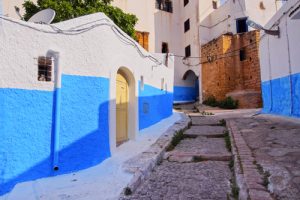 Rabat and its older, neighboring city Salé were established by the 10th century. After several hundred years, the cities became part of the Republic of Bou Regreg in the 1600s. After the collapse of the republic and farther into the 20th century, it was occupied by the French, which subsequently led to Rabat replacing Fez as the country’s capital.

Today, Rabat is the 4th largest city in Morocco, with a metropolitan population of close to three million people. Located where the Atlantic Ocean meets the Bou Regreg river, the city is one of many large Moroccan cities that inhabit the coast. It is only about an hour drive north of Casablanca. On the other side of the Bou Regreg river lies Salé, and just to the southwest is the suburb of Temara.

The western side of the city features beaches, fishing docks, and several neighborhoods along the waterfront, but the heart of the city is made up of the Medina and the Kasbah of the Udayas. These two areas are the main places tourists will want to go, but they are surrounded by several neighborhoods that slowly sprawl into the outskirts of town. The Hassan Tower is also located nearby, and is featured prominently within the layout of the city where the Bou Regreg river meets the Atlantic Ocean.

Rabat’s white Moorish architecture, the Medina, the Kasbah, the Mohammed V Mausoleum, the Hassan Tower and the magnificent Chellah just outside the city are all magnificent sights to behold. But if you look around a little more, there is so much more to discover.

Once situated, you’ll find the new bridge over the Bou Regreg valley with its tourism complex and marina, along with the new Rabat tram system. This area has plenty of touristy attractions, but the real Rabat is found elsewhere.

The Avenue Mohammed V leads down to the commercial area and the medina with a fine tall line of imposing palm trees lining the central reservation. Walking on down past the Café Comptoir, the imposing Central Bank building catches the eye as does the enchanting white colonial building which used to be the Ministry of Information in the early 1990s. 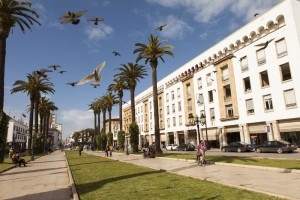 Crossing the Avenue Hassan II into the Medina and turning right up the rue Soukhia, you enter a lively souk with domestic and electrical goods for sale. Walking towards the Kasbah des Oudayas, you find yourself in the gold souk with fine bracelets and bangles, necklaces and other attractive jewelry. Different styles of djellabah, colorful dresses and scarves are displayed amongst little stores called hanouts, which sell everyday items. You’ll notice the old mosque with a marabout, and octagonal minaret, and an archway with painted wooden ceiling with rondels.

The alleys or derbs branching off from the main street look as if they have been recently renovated. A welcome cooling sea breeze tells you that you are walking in the right direction. The street is wide with plenty of room and some doorways have decorated stone lintels. There are hardly any motorcycles to mow down unsuspecting pedestrians. The souk and medina are delightful and they give the visitor a gentle insight into the joy of the Arab souk with families doing their daily shopping and children playing in the streets and alleyways. You can also visit the Rabat Zoo, which is of course great for keeping the kids occupied.

Emerging on the Avenue Laalhou, you can walk up to the battlements of the Kasbah des Oudayas with a view of the sea. The Bab des Oudayas can also be found here with its decorated Mirhab entrance is one of the most glorious entrance gates in Morocco.

The streets of the Kasbah are painted in shades of blue so you get a delightful small circuit of tiny streets reminiscent of Chefchaouen, a guide really isn’t necessary — although they are on offer. Returning through narrow lanes of the medina through streets and archways, you join shoppers walking back from the souk with their purchases. It’s easy to find your way and you come out in the vegetable souk with superb fresh vegetables on to the entry by the Avenue Hassan II.

Steps outside the city is the Chellah, representing the great historical architectural glory of Rabat. The battlements and the Bab are magnificent, as are the rampart walls. You walk through into the wooded area abound the Necropolis down a concrete walkway to a wooden ramp looking over the Chellah and the Bou Regreg valley. Then you walk down to the necropolis with a white Marbout beside it, next to graves of saints. The old mosque has a thin tall minaret, still decorated in green with a stork’s nest and two storks standing guard. Morocco’s minarets are unique and striking, and the Chellahs are all the more so, presiding over this historic location where Phoenicians, Romans, Arabs and Berbers held sway. The Chellah is also a wonderful location for open air events including the Chellah Jazz Festival and the international Mazawine Music Festival.

Tourists can usually walk through the entry of Mechouar, the royal palace, into the grounds but must keep to the pathway. 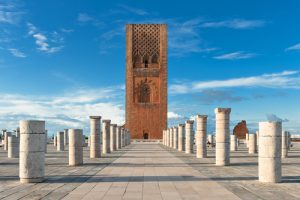 Nearby, the Hassan Tower rises up from its pillars and one wonders what it would have looked like if Sultan Yacoub el Mansour had not met a premature death leaving it only 44 meters high. He intended to make it 60 meters high. A 1757 earth quake also did substantial damage.  The mounted

guards at the gate are splendid in their red uniform with their white horses. The mausoleum contains the graves of King Mohamed V and his son King Hassan II. It’s a fitting tribute to the Alaouite dynasty with its high decorated ceilings, carved white stucco, and zellij tiles.

Rabat is well supplied with fine restaurants: the French L’Entrecote, the Moroccan Dinarjat, and the Italian La Mamma restaurant amongst several others offering a wide range of cuisines. For a drink, the downstairs bar at the Hotel Balima has always been popular, along with the appropriately named night club Amnesia.

Behind the Hotel Balima in the rue Tanta, you’ll find La Bamba restaurant. While it doesn’t have the glitzy exterior of La Mamma pizza restaurant facing it or the Moroccan zelij tiles of Le Petit Beur and its traditional tajines, it’s still a great place to pass the day away. The raffia ceiling and fresco of a desert with cacti is exactly the same as the open-plan kitchen at the back. There are few restaurants where you can find a consistently high level of cuisine and service at a reasonable price. When there, I tucked into excellent brown bread with garlic butter and ordered a half bottle of chilled cabernet, then waited in eager anticipation for the entrecote. It came on a wooden board with superb chips, freshly cooked vegetables, and green beans — which I adore. The entrecote was succulent as is everything you will find on the menu in La Bamba — whether European or Moroccan cuisine. La Bamba forgoes the excess loud music of some restaurants; instead, they were playing Nat King Cole, which is gentle on the ears.

The Hotel Balima and its outdoor café facing the parliament building is where everyone meets to chat and relax over a coffee or tea, it also makes a fantastic place to rest your head for the night. For something a little more upscale, the Sofitel Rabat Jardin des Roses is a superb hotel with outstanding service from check-in to check-out. Rooms are large and comfortable, and have great views of the garden and city-scape below. And if you’re in town for business and need to be close to the embassies, the Le Diwan Rabat (part of the MGallery Collection) makes an excellent choice. The staff here are very friendly, and many also happen to speak English, which can be quite helpful if you’re rusty on your French or Arabic.

Rabat is a pretty easy city to get to. Rabat International Airport (RBA) in the nearby city of of Salé can be reached from several international destinations, such as Paris. However, most people will find it easier to fly into Casablanca then take a train or bus into Rabat. There are two easy to get to train stations, and both are well served with links to other cities in Morocco. You can also get to Rabat by bus from most cities in the country.

Once you’re in Rabat, it’s fairly easy to navigate on foot, and the blue petit taxis are cheap, safe and plentiful. There are two trams in the city that run between Rabat and Salé, so depending on your destination, it can make a good option. Just be mindful that it stops running around 11 p.m. Buses also cover the city, just pick up a map at any of the tram stations or take a quick look at the bus stations (a map is usually posted nearby).

Location: Rabat is the 4th largest city in Morocco and also serves as the capital. Located where the Atlantic Ocean meets the Bou Regreg river, the city is a great entry way into the rest of Morocco, and an easy stopover from Spain.

Weather: The city has a comfortable Mediterranean climate that is moderated by the Atlantic Ocean, experiencing average highs of around 80F/27C in summer and 64F/17C in winter. Rainfall is generally low throughout the year, but is known to have a few days of drizzle in the winter months.

Safety: Overall, Rabat is a safe city by north African standards, but one should still avoid the common pitfalls of travel such as wearing expensive jewelry or wandering around low-traffic areas at night. Women should wear clothing that covers their arms and legs so as to not draw attention and to avoid possible harassment from locals.