The safari guide points to a tree in the distance. Supposedly it’s a leopard, although it must be 50 meters away and nobody can locate the swishing tail. “Now you’ve seen all the big five” the guide declares with a grin, already counting his tips. Someone strains through the binoculars and claims he saw “something” moving. Three others lie and say they can see it.

Nobody in the truck admits that the leopard is probably an overhanging fig branch, and the rhino looked more like a grey rock. Why? Because spotting the full “big five” is the de facto safari bragging right, trumping anything bar the Great Migration. Many years later nobody from this safari scene will remember the quality of the experience, they’ll just remember the facts. Big five? Big tick, and mission accomplished.

But isn’t this an outdated way to look at a safari?

The Malevolent Etymology of the Big Five

In case you’re unsure, the sought-after collection of sights includes lion, leopard, rhino, elephant, and Cape buffalo. Historically, these were the ultimate hunting trophies, and not because their heads look the most impressive when stuffed and mounted on the wall: other animals would try to escape, but these five would fight back and confront the hunters, preferring to charge and attack rather than run and hide. As colonial aristocrats toured Africa they coveted the big five hunting trophies, ably assisted by a gang of servants who would get trampled on when the first shots didn’t kill. It’s hardly surprising that the most desirable became some of the most vulnerable.

Why the Safari Industry Relies on the Big Five 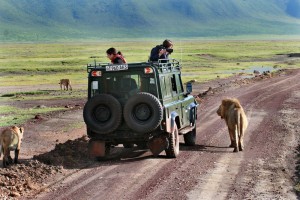 Fast forward to the 21st century and the term is equally as idolized, evolving into a tangible hook that’s been co-opted for marketing purposes. The big five sells. Private game reserves are the main culprits, ensuring they have at least one of each, and then plastering their brochures with stuff like “see the big five in their natural habitat” and “the closest place to the city with the big five.” It’s doesn’t matter how many of each the reserve may have; leave one out and it’s an uphill struggle to attract customers. As the number of competing parks and reserves continues to grow, the big five has become more and more significant. It’s now a term that a multi-billion dollar industry relies on. A number of parks have been clambering recently to ensure they cover all bases, and animals are being forcibly moved, or “introduced,” to parks and reserves across the continent.

How the Big Five Simplifies the Safari Experience

Particularly if it’s your first safari, it’s difficult to escape the desire to tick animals off a list. Almost inevitably, someone will ask the question, and you’ll want to utter the golden words: “I went to Africa and I saw the big five.” Yet what does that really mean? That you lied about spotting a leopard? The best safari memories can’t be preconceived. They’re surprises, intimate moments witnessed only by you, scenes imbued with both drama and charm. A cheetah accelerating towards an impala, the huge elephant herd playing beside your verandah, a loved-up zebra pair gently grooming each other, perhaps a lion pride cautiously avoiding a rampaging hippo.

The greatest safari experiences lie in the indelible imprints that struggle to be captured in words or photos. It’s the moments that reveal Africa’s animal kingdom in all its raw beauty and power. Not the distance glimpse of a sleeping cat, or a rhino pair growing tired of camera flashes. Unfortunately, the big five narrative has been firmly transplanted from marketing strategy to eager consumer. No matter how impressive the safari, there’s always a tinge of disappointment if you didn’t tick off the legendary list. It has simplified everything, turning subjective experience into objective fact.

The Big Five Winners and Losers

Many would assume that the terminology aids conservation efforts, after all, keeping the big five from extinction is surely essential to the safari industry. However, evolution becomes distorted as private game reserves purchase or “rescue” animals and keep them within fenced areas. For example, reserves in South Africa can’t keep lions and prey in the same zone, because it’s not a fair fight if fences prevent escape. The lions are fed by staff, making the reserve little more than a glorified zoo (something that’s missing from the sales brochure). In comparison, there are few national parks where there is a genuine chance to spot all of the big five. Botswana’s Chobe National Park might have close to 100,000 elephants, but there aren’t any rhinos. Leopards can’t be found in many. You’re unlikely to spot the big five in the Serengeti, Ngorongoro Crater, or Namibia’s Etosha, but they offer infinitely better experiences than a tiny high-end private reserve.

Is There an Alternative?

It is catchy isn’t it? There’s no denying that the hunter’s relic is an advertiser’s masterpiece. Alternative phrases don’t spring to mind. Some parks will focus on the quantity of animals that can be spotted, others emphasize an unusual or varied collection of wildlife, and promoting proximity and authenticity also helps national parks attract customers. Yet nothing can compete with the continent wide universality of those two little words. So while the big five is an outdated concept, it’s difficult to vision how the term will be wiped from safari vernacular.

One alternative lies in evoking the origins of “safari.” It’s a Swahili word, meaning “long journey.” Focusing on the big five suggests being in a zoo, wandering around ticking off what you expect to see. But journey implies surprise and unpredictability. It moves the emphasis from what you anticipate seeing, to what you actually experience. Preconceptions are removed and the park becomes a blank canvas waiting to be explored. Safaris should be intimate and personal. Who wants the exact same photos and sights as everyone else? By viewing safari as a journey, rather than a hunt for the big five, you will be celebrating both the inimitability of the experience, and the individuality of each park. Furthermore, you’ll be making safari subjective rather than objective.

Practical Tips on Choosing a National Park or Game Reserve 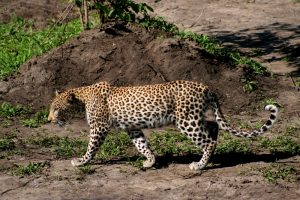 A dazzling array of parks and game reserves can make it bewildering to choose a safari destination. Each has enviable photos, subtle promises, and a plethora of superlatives. So how can you look beyond the big five?