The massive province of Western Cape contains some of the most popular attractions in all of South Africa. This enticing southwestern region is not only home to Cape Town, one of the world’s most beautiful cities, but also the Western Cape winelands, the lovely fishermen’s villages of the West Coast, the forests and scenic beaches of the Garden Route on the east coast, and the arid Cederberg mountain range to the north.

One of the most stunning and sophisticated cities on the planet, Cape Town draws visitors who flock to its fine dining, world-renowned winelands, historical monuments, and outdoor recreation.

Wander the vivid streets of Bo Kaap, explore Greenmarket Square with its colourful stalls, browse the shops of pedestrian-friendly St. George’s Mall, or the antique vendors of Church Street. For a glimpse into the legacy of apartheid, visit Robben Island and hear the tour guides — some of whom were former prisoners — describe an era that ended not so long ago. For something lighter, go shopping in the V&A Waterfront, which offers hundreds of shops, dozens of restaurants and the Two Oceans Aquarium. The waterfront is also the launch point for day cruises around the Cape peninsula.

From the harbourfront, the imposing massif of Table Mountain rises up impressively behind the city. One the western edge, the wonderful Table Mountain Cableway whisks visitors to the summit in mere minutes. A ride to the top is another must-do in the city. You can also hike the mountain via a network of trails that criss-cross the terrain. There are various routes to choose from, each with varying degrees of difficult, but the easiest one is Platteklip Gorge, which takes about two hours. A hike to the top of Lion’s Head on a full moon night in summer is one of the most popular activities amongst locals. 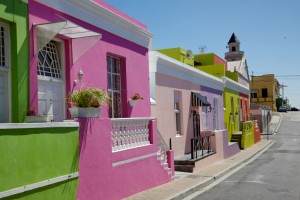 Cape Town is also about the necklace of beaches that dot the coast, which really hit their stride in summer, but also include bars, clubs and restaurants that are popular year-round. Clifton and Camps Bay could be Monaco or Miami, with sparkling white sands, aquamarine waters, lavish penthouses and palm-lined boulevards chock full of model-clad cocktail bars. Then there’s the charming village of Hout Bay, which offers great restaurants and shopping in a laid-back environment, plus easy access to the stunning Chapman’s Peak Drive. Cape Town’s quaint coastal suburbs will enchant you: Simon’s Town with its naval history and charming harbourfront, Fish Hoek for its safe bathing and warm clear waters, and bohemian Kalk Bay for the traditional fishing harbour and necklace of quirky boutiques. A seafront suburban train line runs the length of them, making for one of the most spectacular urban rail journeys in the world.

One can’t visit Cape Town without experiencing the vineyards of Constantia, which are some of the oldest in the country, and some of the finest. The likes of Klein Constantia, Steenberg, Uitsig and Buitenverwachting are all worth a visit for both the wonderful views and the wines. More on this below.

And Cape Point is also unmissable; you can set aside an entire day for the drive there and back. Explore the historic lighthouses, wander on empty beaches and keep a keen eye out for the zebra and antelope that call this section of the Table Mountain National Park home. It’s wild, rugged and spectacular. 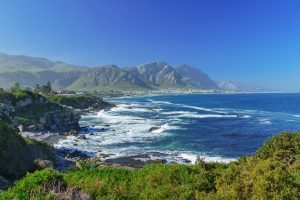 The Overberg region lies just to the east of Cape Town. Hermanus is probably the best-known town in the Overberg. In addition to beaches, farmer’s markets and shopping, you can go shark-cage diving and more famously, whale-watching. Only 20 minutes’ drive away is the quieter, less touristy but more charming town of Stanford, the Overberg’s best-kept secret. Here you’ll find country restaurants, the Birkenhead Brewery (where you can do a tasting of six craft beers), the Klein River cheese farm (where you can do a free cheese tasting), hiking and mountain biking routes, and river cruises.

Covering a stunning 800-km stretch of Indian Ocean coastline between Cape Town and Port Elizabeth along the N2 motorway, South Africa’s Garden Route is probably the country’s most famous drive. Here are some of the highlights: 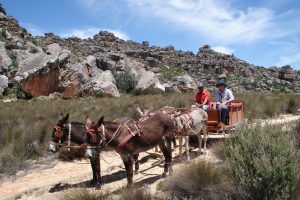 This sparsely populated region of farmlands to the north of Cape Town is home to dramatic sandstone mountains, quiet one-horse country towns and over 2500 millennia-old San rock art sites. It’s also where most of South Africa’s famous rooibos tea is grown.

The best time to visit the Cederberg is in spring, when carpets of wildflowers transform the arid landscape into a patchwork of color. For an utterly isolated adventure, head to Wupperthal, a far-flung mission village with a population of around 500 that is reachable only by 4WD. Here a grass-roots tourism initiative takes visitors on a three-day donkey cart trail through the mountains, stopping off at increasingly tiny hamlets along the way. Meals are taken in family homes and overnight accommodation is of the homestay-variety, making this as authentic a trip as you could hope to find. 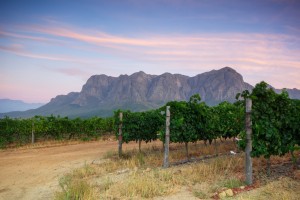 Going wine tasting in the beautiful Western Cape winelands is one of the top highlights of a visit to the province. The winelands extend from Constantia, a suburb of Cape Town, all the way to the towns of Stellenbosch, Paarl and Franschoek, which are all about an hour’s drive from the city. Along the way the stunning Cape Dutch architecture is marvelous to behold. Most wineries charge a nominal fee for tastings, but some will let you sip the goods for free, including: Klein Constantia, Steenberg Vineyards and Buitenverwacthing in Constantia; Vrede en Lust, La Bonheur and Blaauklippen in Stellenbosch; and Boekenhoutskloof and Alleé Bleue in Franschhoek.

There are hundreds of hotels, lodges, guest houses, bed and breakfasts, hostels and self-catering apartments in Western Cape from which to choose. Visit AFKTravel.com’s Western Cape Hotels Page to see what your options are.

Western Cape is one of the top dining destinations in South Africa. From the high-end gourmet eateries of Cape Town, to the mom-and-pop cafes along the Garden Route, to the cozy brunch sports in the Overberg, to the grand vineyard estates in the winelands, you’ll eat well here. Visit AFKTravel.com’s Western Cape Restaurants Page to see what your options are.

Getting to Western Cape by air usually involves flying into Cape Town International Airport (CPT), which is servedd by numerous domestic airlines, and a handful on international carriers ( ). There are smaller airports in George (GRJ), Oudtshoorn (OUH), and Plettenberg Bay (PBZ).

The best way to get around the Western Cape is by hiring a car. They can be rented at airports or in various cities and towns, but Cape Town has the largest selection of vehicles and the best prices. All major companies are represented in Cape Town, and smaller regional companies tend to operate outside the Mother City.

If you’re a backpacker or on a budget (and don’t mind not having much privacy), another way of getting around is by taking the Baz Bus. This hop-on hop-off 22-seater private bus service operates on a fixed route from Cape Town to Johannesburg. Stops in Western Cape include Stellenbosch, Swellendam, Mossel Bay, George, Oudtshoorn, Wilderness, Knysna, Plettenberg Bay and The Crags.

Safety: All the usual precautions should be taken as in anywhere else in South Africa: don’t flash cash, jewelry or electronic devices; don’t wander into unfamiliar areas at night (either on foot or in a car); when going out at night, go in a group; and be very careful who you give your credit or debit card information to.

Weather: Being such a large province, Western Cape has a number of micro-climates, but overall it is warm and dry in summer, and cool and wet in winter. The temperature in summer can rise as high as 30C (86F) in inland areas, and in winter it can drop as low as 5C (41F) at night.

Banking and money: Banks and ATMs can be found in all larger cities and towns. Most larger hotels and restaurants take credit or debit cards, but some smaller merchants operate on a cash-only basis — so be sure to have a sufficient amount on hand.