Dar es Salaam, the capital of Tanzania, is often bypassed by many tourists and used simply as a stopover on the way to the beaches or the safari circuits. But this really is such a pity. Dar has everything that demarcates it as the center for commerce and trade — a large port, towering buildings in varying degrees of modernization and decay. And then there is the world-famous traffic, which has caught out many an unsuspecting traveller in two-hour long jams while getting to their destination.

Don’t let the traffic put you off though; the city is more than just a place to lay your head during a one-night pass over. Get lost in the buzzing street scenes, dance until the dawn, or dine in Cliffside restaurants, homely local joints, or sleek modern eateries, all distinctly East African in flavor and style. This Dar es Salaam city guide will show you how. 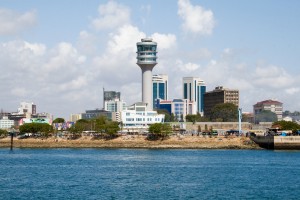 The city is divided into three municipal districts. Temeke, the largest of the three, is situated in the south. Heading outside of the city center this is the more rural area of Dar city, closer to the beaches and with far less infrastructure. Kinondonu in the north is home to most of the more expensive suburban areas in the city. The embassies, newer restaurants, expat shopping and food areas and the more boutique styled hotels can be found here. Llala or ‘downtown’ is the central district, which has all the commerce, banking and trade, along with the bigger hotel chains like the Serena and Hyatt. It also encompasses the port and ferry areas as well as the main markets.

Accommodation in Dar Es Salaam is as varied as the city itself. But Dar is an expensive city, and the hotel standards are not the same as what you’re used to back home, for the price you’ll pay. Pick your hotel based on your wallet, the amount of time you are spending in the city, what kind of comfort level you are after, and how many are in your travelling group. Most hotels accept credit cards.

Eating out in Dar Es Salaam is lively, sophisticated and intimate, street divine or sporty and loud. Like any city the options for tastes and styles are all available, but there are a few standouts that should be on your list. Try the street food from the likes of Mamboz Resturant on the corner of Morogoro and Libya road, or any of the vendors on Zanaki Street or Mahiwa Street next door to the Sleep Inn Hotel. If restaurants are more your style, most hotels will have good in house options, with standouts being the Indian food in Protea Hotel Courtyard, seafood in the Serena and international cuisine at Sea Cliff.

Slipway has a collection of cafés and restaurants that offer up great ice cream, snacks and international cuisine like burgers and pizza, with lovely views over the bay. The streets in the Oyster Bay are home to a variety of Thai, Chinese and Asian restaurants depending on your budget.

If you want to go out dancing in Dar you may want to avoid the popular Q-Bar – it’s slightly rough place and a known haunt of prostitutes. A better option is Triniti on a Friday night, as they have slightly more crowd control.

There are quite a few airlines that fly direct into Dar Es Salaam, the most used being British Airways, Turkish Airlines, South African Airways, FastJet, Ethiopian Airlines, Emirates, KLM and Kenya Airways. Citizens of most countries can get a visa on arrival.

Flying is by far the easiest and most cost effective option if you are wanting to head from Dar out to other towns in Tanzania as roads can be incredibly bad and require long travelling times and distances.  The following airlines operate within Tanzania:

Travel around Dar Es Salaam is pretty straightforward, except for the horrendous traffic. The major traffic congestion points are on Sallender Bridge, the portion of the main road into Dar Es Salaam from the airport where Port road meets Mandel Road, and around the Khariko informal trading area. 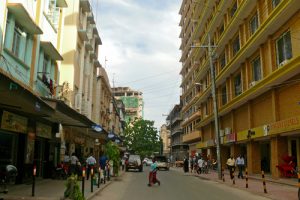 Bajajis: These three-wheelers are your cheapest option for getting around, (between 2 000 – 4000 Tsh depending on the distance). However they are not allowed downtown, so use them for trips in non-central areas. Beware bajaji drivers around Slipway, as they are ruthless when it comes to overcharging. Always haggle to get a fair price.

Taxis: These are sedan cars (a mixture of marked and unmarked) in various stages of dilapidation. Generally they are very safe, and by simply standing on the side of the road you will get many offers for rides. Hotel personnel can also arrange taxis for you, but it’s cheaper to negotiate a price directly with the driver. Prices will increase during the evenings. If you are planning to stay in the city for a few days, use the same driver if at all possible. This will get you better service and you can negotiate better prices.

Dala dalas: This is the regular public form of transport in the city, and is only recommended for the really adventurous. They are big, loud minibuses, also in varying degrees of repair. While they are the cheapest way to get around, they often do not make stops in specific areas of Dar City and you will more often than not have to catch a bajaji or taxi to get to your final destination.

Tipping: In major hotel chains or hotels that are of a luxury standard tip the same you would at home (5000 tsh for baggage is a good average). Tipping is not expected in restaurants – generally between 5-10 % is more than enough, unless you feel the waiter has given you particularly good service. The same goes for taxi drivers: if you find a regular driver, reward him with a good tip, which means you’ll be picked up first, given discounts, and you won’t have to wait for a ride.

Police and safety: Most neighborhoods in Dar Es Salaam are safe outside of the main city center and you can happily walk around day or night. The exceptions are areas around the port and karioku, which are sketchy. Of course you should not flash large sums of money or expensive camera equipment anywhere — especially downtown. Tuck away handbags and cell phones, especially if you are using a bajaji. If you are planning on walking anywhere do so in a group, and don’t venture alone down empty, unlit streets. Pickpockets may operate in large crowded market areas.

If you need the police, your best bet is to head to your country’s embassy first, as they will be able to assist you with any language barriers you might have, and provide local advice. Most of the embassies are found around the Slipway and Oyster Bay areas.

Health: There are two very modern hospitals in the city Agha Khan Hospital- http://www.agakhanhospitals.org/dar/ and AMI (Located near Slipway ) http://www.amiplc.com/