Lagos is the cultural heart and largest city in Nigeria, and one of the largest urban areas in the world with over 20 million people. Unfortunately, outside of Nigerians and business travelers, few tourists go there, but that’s quickly changing as the city progresses and the country markets itself as a tourism destination.

Facing south into the Atlantic Ocean, Lagos is made up of a sprawling mainland and several large islands near the coast. Victoria Island and Lagos islands comprise the nexus of the city, while Lekki extends east from Victoria back up into the mainland. North of the islands, the rest of the mainland pushes deeper into the country. Much of Lagos is poor, crowded, hot, hard to navigate, and lacking anything of interest for out-of-town visitors. Victoria, Ikoyi and Lekki tend to be the areas where tourists stay, shop and dine and where most of the attractions and activities are.

As the commercial and financial heart of Nigeria, Lagos is the place where deals are done and dollars are made, and where international business travelers come to enjoy themselves. Several estimates have it surpassing Johannesburg in size by 2015 to become one of the largest urban areas in the world.

While Lagos doesn’t exactly cater to tourists, that doesn’t mean you can’t have a fun time while there. One of the best places to stop is the Lekki Market, a great place for shopping for handicrafts if you’re trying to find some authentic African souvenirs for you or your loved ones. You can purchase everything from traditional baskets to jewelry to wooden carvings to masks. 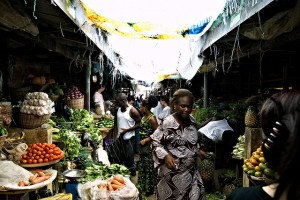 No visit in a major city such as Lagos would be complete without a visit to a prominent museum, and the National Museum of Nigeria offers just that. With excellent exhibits that focus on the art, culture, food, ethnography, music, and history of Africa’s largest country, this museum is the place to really dig in and learn about Nigeria’s fascinating history that spans thousands of years.

If you’re looking for fun, look no further than Victoria Island. Probably the most famous area of Lagos, Victoria Island is the epicenter of tourism, shopping, restaurants, bars, and beaches. So, maybe it’s a bit gentrified, that doesn’t make it any less enjoyable. The main haunt for wealthy Nigerians and ex-pats, Victoria has almost anything and everything you could possibly want between food, nightlife, sun, and sand. While generally more secure than other areas of Lagos, the same precautions apply when going out at night.

Terra Kulture in Victoria is a great way to dig into Nigeria’s deep culture and history. Featuring a mini-library with a wealth of information on Nigeria and Africa, Terra Kulture features an excellent craft shop featuring many of Nigeria’s different art styles. They also offer language courses in Ibo, Yoruba, and Hausa as well as a multi-purpose hall and restaurant.

Another great way to experience Lagos is to hire a guide for a day to get a real insider’s feel for this incredible city of 20 million which is Africa’s largest (along with Kinshasa and Cairo). While there are tours that focus on different aspects, a knowledgeable and reputable guide will be able to tailor the tour to your desires and show you all the best spots, whether you’re searching for history, food, or crafts. It also beats taking public transport. 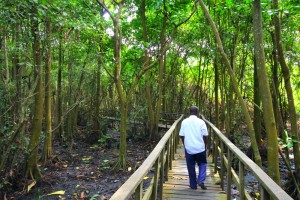 There are several places to check out just outside of Lagos. Located on the Lekki Peninsula, the Lekki Conservation Center is a great way to spend the morning and get back in touch with nature. Featuring dozens of animals like crocodiles, duikers (imagine an African deer/antelope mix), and birds, the center also has hundreds of local species of plants native to coastal Nigeria. Take one of several trails at the center in the morning hours to see the animals when they’re most active.

Hire a taxi for a short hour long ride from downtown to Sungbo’s Eredo, just north of Lagos for a lesson in history (and a good way to get back to nature). A series of walls and ditches set within the jungle forest, the monument was built to honor a noblewoman one thousand years ago and is claimed to be the largest single pre-colonial monument in Africa. Hire a local guide to give you more insight and facts, like the claim that more earth was moved to create Sungbo’s Eredo than was used to construct the pyramids.

Also just outside the city is the Eko Tourist Beach Resort in Akodo, a markedly more upscale alternative to Lagos’ beach culture. With cabanas set in a palm tree lined beach, this is the perfect place to kick back with a drink and a good book. An immaculate swimming pool, uninterrupted power and internet, and luxury amenities make this a peaceful escape from hectic Lagos for an afternoon or a few days.

Being the largest city in the country, Lagos is a cultural melting pot of cuisine from all around Nigeria, but also has plenty of international dishes to cater to most travelers.

If you’re looking for something a bit exclusive with a party atmosphere, head to Piccolo Mondo. The restaurant bills itself as Italian, but like many other restaurants around the region, it actually serves a wide variety of dishes, most likely in an attempt to lure as much business as possible. It turns into quite a party on Friday and Saturday nights, with many of the wealthier local youth (and a good selection of international visitors) building up to a dance party from around 11PM. The crowd is generally pleasant and young, with most in their mid-twenties.

Still undecided and looking to get everything under the sun? Look no further than Lagoon Restaurant. On the west side of the property, Churrasco serves Brazilian food in the same meat-on-a-stick style that many western restaurants have adopted. The venue resides in a raised, circular building with a thatched roof, straw-woven chairs and palm trees painted on the inside ceiling. Seaside, the open restaurant in the center of the property, edges right up to the side of the lagoon and serves Indian, Chinese and continental (meaning “all of the above”) dishes.

For something to spice up your life, try the aptly named Spice Bar. Arguably one of the best Indian restaurants in Lagos, Spice Bar has become so popular that it’s now expanding into the larger downstairs space. The restaurant serves a combination of north Indian and Chinese cuisine in a plainly decorated, upstairs dining room. The “L” shaped room has a score of tables scattered across the white-tiled floor and a main bar in the corner where one of the proprietors takes orders and commands his army of waiters.

Lagos caters more to the business traveler than leisure traveler, and hotels in the city tend to run on the high side for prices. If you are looking for something with a nice waterfront view, try the Radisson Blu Anchorage. This stylish, glass-fronted establishment’s prime waterfront location makes it a strong contender for the best spot in Lagos. It’s large open terrace overlooking the lagoon inlet on Victoria Island is great for early evening networking cocktails. The hotel’s 170 crisp, understated rooms were designed by Swedish hospitality designer Christian Lundwal and feature generous workstations and fast Wi-Fi.

For more of a resort style experience, try the Federal Palace Hotel & Casino. It not only has one of the grandest entrances in Lagos, but it boasts enough amenities that you have very little reason to leave the premises. It’s more of a resort than a hotel, really. First, there’s the pool complex, which boasts the largest pool of any hotel in Lagos, a kids’ play area, water slides, and day beds. Then there’s the mini-golf, tennis courts, onsite bank, casino, boardrooms, three restaurants, fitness center, and business center.

If you want something outside the city, go for the Epe Resort & Spa. At 70km away from Lagos city, this resort warrants its entry in the top ten for its proximity to Lekki Free trade Zone as well as the peace and quiet on offer.Leave the city behind you for a weekend and head here. Once through the security gates, switch off your brain enjoy a game of tennis or take a dip in the spacious swimming pool. Walk the verdant grounds overlooking the tree lined greenery of Epe or take the short trip to the palm strewn Eleko beach for one of the least spoilt stretches of coastline in the region.

Rickshaws in Lagos (Courtesy of cpnagasaki.wordpress.com)

Though there are many horror stories about the traffic and public transportation systems in Lagos, most of them are severely exaggerated. It’s true that traffic in the city can be terrible, but it can also be quite light, and getting around doesn’t have to be a nightmare. Some careful planning around rush hours and carefully choosing which mode of transit to take will ameliorate most of the congestion in your journey.

You’ll probably need to take taxis or buses in Lagos, as the city isn’t exactly walkable. The primary options are yellow city taxis, private cars and minibuses. Yellow cabs are probably your best bet and are generally safe and everywhere. Minibuses should be your second option, and can be better for taking longer routes through the city, such as going all the way from the mainland to Lekki. If you are feeling more adventurous, try a ride on a motorbike taxi (okada), probably the most common form of transit in Lagos, but also the most dangerous.

While many parts of Lagos are safe, plenty of areas aren’t. It’s good advice to stay near the tourist areas and hotels and not to wander around too much after dark by yourself, though these considerations are similar for most cities in sub-Saharan Africa.

There are often check points after dark if you happen to be driving around too late, just a fair warning. In Victoria Island (where many people stay, and also a hot spot for nightlife, the infrastructure is strong with nicely paved roads, a strong network of generators and access to beaches. If you’re in Lagos Island it can be somewhat unsafe after dark, without the constant activity of Victoria Island, so keep your wits about you if you head out after hours. And if you stay on the mainland, development is sporadic, with large areas of slums, sprawling commercial plants and high rises dotting the map. Expect a great deal of construction, especially on the roads, and inconsistent travel times.