Hiking Ethiopia’s Simien Mountains attracted me the moment I touched down on a brief layover in Addis. Descending into the city, I was shocked to see terrain so lush and dramatic. Naively, I suppose I had let dated images of famine colour my imagination. While I found myself unable to spontaneously extend that initial layover, I quietly decided to spend the following years sampling Ethiopian food and expanding my knowledge about the country until I could find a way (and the funds) to return.

A few years later, I finally found myself booking an Ethiopian Airlines flight from Canada to Mozambique. Strategically, I booked a two-week layover in Ethiopia, leaving me just enough time to explore pockets of the country as I traveled on route to the Simien Mountains.

Briefly, I passed through the hustle of Addis and the serenity of Bahir Dar before arriving in Gondar – the launch point for journeys into the Simiens. I had left myself a day to organize food and gear together for the trip – a task that felt near impossible upon arrival. However, as I began to poke around shops asking for peanut butter and laughing cow cheese, gear began to materialize alongside the food supplies. Shop owners all seem to have a brother or a cousin who has the stove, the pot, the tent and the sleeping bag you so desperately need. Within four hours, I was fully kitted out and ready for the early morning departure. 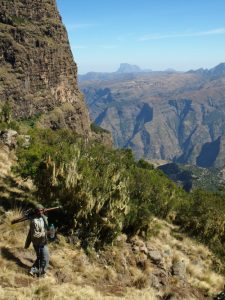 Early the following morning, our bus began to snake out of Gondar, traveling towards Debark. In this tiny town, we connected with our park-mandated scout, paid our park fees and continued the drive up to Sankaber – the first official campsite. Climbing high into the mountains, the dusty hills were replaced with sheer green cliffs. It took great self-control not to request the vehicle stop at every hairpin turn in the road that jutted out over never-ending green. We eventually rolled into the first campsite, where a few other hikers were pitching up their gear having hiked that day from town. With majestic views around me, my love affair with Ethiopia only continued to grow.

The first full day of trekking proved to be even more captivating than the drive – though perhaps, that is unsurprising. For a full day, we cautiously followed the winding foot paths carved out centuries ago by local inhabitants. Treading lightly along cliff edges, we were treated to panorama after panorama of powerful and utterly breathtaking vistas. Countless lookout points were interspersed with rests at waterfalls and snacks alongside Gelada baboons. The day drifted by as we ascended and descended, gazing dreamily out onto the landscape that surrounds. Eventually, we climbed to a frosty campsite on top of a sprawling hill where we opted for an inexpensive room in the eco-tourism cabin in hopes of finding reprieve from a bitterly cold wind.

From Gich, we began a demoralizingly slow hike up a barren and massive mountaintop. Tired bodies and barren landscapes made the early morning hours trying. However, we’d been told that this region was among the best for spying the elusive Simien wolf, which encouraged us to stay sharp. Persistent scanning was eventually rewarded when we saw one of these talented hunters sprint across the sprawling landscape, ducking between boulders. With sharp eyes (or binoculars), we were able to spend a few minutes watching this endangered species hunt.

When the wolf dipped behind a cliff, we continued to trudge upwards, making our greatest ascent to date. Though tiresome, we reached a triangular peak that rewarded us with views more powerful than anything that preceded them. We towered over the valley below, looking down over soaring birds, tonight’s campsite and, way off in the distance, a tiny village.

On our third day, we had hit the halfway point of the journey. With varying energy levels, half of the hikers at camp – myself included – opted to spend the day exploring the surrounding landscape. A few ambitious folk strayed, heading off to the highest point in the Simien range: Ras Dashen.

Reunited with fellow hikers over dinner, it quickly became apparent that the final two days of hiking would occur along the main road that bisects the park. There was something far less charming about two days of walking along a road, and we quickly began to shift our plans around finding a lift back down instead.

Chennek to Home – and What I Learned…

As we desperately hitch hiked our way down road, I couldn’t help but brainstorm what I learned from this trip… and what I might share with other intrepid hikers. So, here goes:

Hike there, drive back

The additional cost deterred us from pre-planning a lift back into town, and we sorely regretted that as we walked the demoralizing dusty road back. All trek options follow this same route, taking footpaths up and the dusty road back. Most people however, have the foresight to drive down. We eventually caught a ride with a public bus – but the sharp turns and unconvincing bus breaks made me wish I’d opted for the safer (and fully booked) vehicles.

Organizing your own meals in Gondar before you hike is completely possible. We pieced together instant noodles, pasta and peanut butter, which provided adequate sustenance through the hike. I may have been completely happy with this menu had we not camped beside other hiking groups that had opted for the extremely affordable chef. As their post-hike popcorn snack was spread out on a checkered blanket while their surprisingly elaborate dinner was prepared, I couldn’t help but look a bit envious. Considering the nominal price the chef charged for organizing and preparing all meals (and cooking equipment), I’d most certainly go this route the next time around. 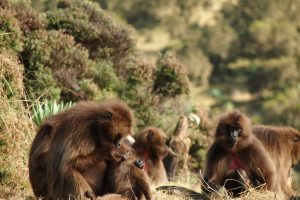 A warm sleeping bag is key

Ignorantly, I assumed Ethiopia would be warm year round. While the days were a pleasant temperature, the nights dropped near freezing in the winter months in which we hiked. The sleeping bags (and tents) we rented in Gondar did virtually nothing to protect us from the cold – and I desperately wished I had opted to tuck in my compact Canadian sleeping bag instead.

The days in the Simiens were pleasant but certainly not hot. On our first full day of hiking, this pleasant temperature let me forget the importance of sunscreen. However, on the second morning, as I woke up with crispy skin and a blistering nose, I became acutely aware of just how strong the sun was in this high alpine climate. A high SPF would serve any hiker well going forward… though perhaps, that’s obvious.

Get (Cautiously) Close to the Baboons!

A definitive highlight from my time in the Simiens was the two hours I spent surrounded by Gelada baboons. Initially, I sat on the edge of the troupe quietly observing their surprisingly human-like tendencies. Slowly however, the troupe moved around me – seemingly unfazed by my presence. This experience was far more than a sensational photo opportunity…

This article was originally published on April 16, 2015.