As recently as twenty years ago, Port Harcourt was known as Nigeria’s “garden city.” That’s because a sizeable chunk of its 360 sqkm was green, a thrill for residents and visitors. In the intervening years, up until late 2008, this century old city of seven million people was a high-risk destination to either travel to or live in: militancy, kidnappings and murders resulting from inter-cult wars literally brought the once-vibrant capital to its knees and killed whatever twinkle it had, including its nightlife.

Today all of that violence is in the past and Port Harcourt is gradually getting its groove back, racing to regain lost ground. Its airport (domestic and international wings) has just been through a facelift and remodelled so that it is better able to handle the million-plus travellers who pass through it annually; newer and classier entertainment-cum-leisure hangouts and hotels are bringing back the buzz; the lost gardens are sprouting again, and with them a renewed urban redevelopment drive which partly seeks to phase out as many slum dwellings as possible; there is an improved refuse management system in place, complemented by a mass transportation scheme that aims to make moving around the city less stressful.

Port Harcourt, divided broadly into the Upland and Riverine sections, was first settled by the Ikwerre (farming) and the Okrika (fishing) communities. The Ikwerres are found mostly in the former while the Okrika, along with Bonny and Kalabari communities, make up the latter. Collectively, though, they form part of the larger Ijaw ethnic group predominant in Nigeria’s south-south region. As expected, many years of trading and migration have brought about the presence of other tribes.

It is common to hear residents speak of the Old GRA (Government Residential Area), which was the heart of the city during the colonial years and where the European community lived and administered the province. With much of the architecture of that era still intact, a visit to that part of the city is nostalgic for many. One attraction not to miss in the Old Township is the bright and beautiful Jumboton Art Gallery (419 Bende Street). Their collections of sculptures are a visual delight. 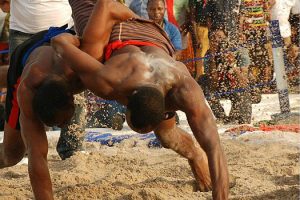 The New GRA, some 20 km from the old one along the Port Harcourt-Aba Highway, is part of the new city centre, fanning out to other residential communities like Abuloma, Amadi-Ama, Amadi Flats and Borokiri. It was designed originally for residential purposes but in recent years has become the preferred location for most new entertainment hangouts in town, perhaps because of its higher safety quotient. To decongest the city, a new development project, the Greater Port Harcourt City, is in the works.

Port Harcourt’s tourist attractions can be countered on the fingers and there are not so many noteworthy places of interest. There is a federal museum housed in an old, colonial structure in downtown; you may also wish to visit the state-owned museum and the integrated cultural centre, situated inside the Rivers State Secretariat. The beaches that should form a healthy getaway for tourists and complement the vibrant entertainment scene are not particularly worth the visit, except for the odd privately managed beaches. The state-owned Port Harcourt Tourist Beach is a no-no. On a cheerful note, the annual Carniriv (Rivers State Carnival), held sometime in December, is a pleasant parade of the many cultures that make up the state across its 23 local government areas. That is the one you should try not to miss, if you are in town just before Christmas.

Port Harcourt is no different than any other Nigerian city when it comes to eating out—there is something for everybody, from fast food restaurants to eateries that specialize in local delicacies. A trip around the New GRA neighbourhood will reveal some gems, like Skippers, which is thronged for its Nigerian foods. Also foray into Odili Road, a new residential project now bustling with classy hangouts like The Red Coral; everything about it oozes business class. Tilapia Things serves just that—Tilapia fish (with drinks, of course).

The most popular of the local delicacies is a street snack called Bole—roast plantain doused in pepper sauce with a serving of roast yam and fish with a sprinkling of salt and scent leaves. Though sold everywhere across the city, three locations are known to serve the best of it: Agudama Street (D/Line-New GRA axis); Nwokekoro Street, Amadi Flats (Old GRA); and Circular Road, Elekahia Housing Estate (Trans-Amadi Industrial Layout). There is also the Native Soup, which is taken with swallow foods (Garri, fufu or yam-flour; it is served in the city’s eateries and restaurants. The riverine areas delight in Onunu, which is yam pounded with ripe plantain with a little palm oil added for colouring. It is taken with fresh-fish pepper-soup or stew.

Port Harcourt comes alive after working hours have ended. Owing to its status as a business environment with its accompanying stressful traffic, locals love to find ways to de-stress, which they in outdoor pepper-soup joints and sports bars scattered around town. Check out Tuscany (Obi Wali Rd), Lesukka (Peter Odili Road). As one resident puts it, entertainment in Port Harcourt means just one thing: clubbing. For the best clubbing experience, go to Ground Zero (25 King Perekule Street), Boomerang and De Globe Club.

In recent years, Port Harcourt has repositioned itself as a centre of creativity, harnessing its past literary heritage. It is currently the UNESCO World Book Capital, so it plays host to lots of bookish events, like festivals and monthly readings. So if you’re looking to soak yourself in Nigeria’s rich literary offerings, you will find a good dose of that in the city; if you’d also like to catch up on what local films are the rave, check out the Genesis Cinemas or the Silverbird Galleria.

Port Harcourt ranks next to Lagos as one of Nigeria’s business capitals, so there is a choice selection of upscale hotels to cater to the whims of business travellers. The Swiss International Mabisel (swissinternationalhotels.com/mabisel-portharcourt) is everything the busy executive would want in a hotel—elegant and palatial. Located in the Trans-Amadi Layout (off Peter Odili Road), its top-of-the-range décor, rooms and suites and a refreshing range of leisure facilities are the perfect antidote for a stressful day in the oil-rich city.

If you crave state-of-the-art gymnasiums and perhaps security escort, you can’t go wrong with Best Western Premier Port Harcourt Hotel (www.bestwestrnph.com). Le Meridien Hotel (lemeridienogeyiplace.com), Golden Tulip (goldentulipportharcourt.com) and Hotel Novotel (novotel.com) are in a class of their own. If you’d like accommodation that has evolved with the city, then the Hotel Presidential (hotel-presidential.com) is for you; built in 1964 and recently touched up, it’s been on the visitors’ radar for five decades and continues to be thronged by expatriates who perhaps just need an air of nostalgia.

De Edge Hotel (deedgehotelph.com) is one of the latest additions to the hotels cluster in the city, also offering premium facilities and service, and it promises “lavish indulgence”; just fourth months old, it currently offers a 50% discount on its tariffs during the weekends. South African brand Protea has a couple of three-star hotels in the city.

A light-rail network is in the works but it is still a long way from completion, so residents and visitors alike still rely on the existing options, which includes the newly introduced Bus Rapid Transit (BRT) scheme. Water transportation is unappealing and serves only locals who need to travel to the creeks and hinterlands. When compared with Lagos, Nigeria’s commercial nerve centre, commuting by road is cheaper in Port Harcourt.

On the average, and depending on distance, airport taxis will charge around N2500 (Approx. $16) for a shuttle into the city; once in town, registered intra-city taxis (painted in navy-blue and white stripes) charge N500 (Approx. $3) per drop for short distances and N700 (Approx. $4) for longer rides. Hourly rates average N1000 (Approx. $6) and a full day goes for about N10, 000 ($62). Most standard hotels offer car-hire services, but they also can be found outside of the hotel premises. But bear one point in mind: all prices, be it with cab drivers or souvenir vendors, are negotiable; so having a local with you anytime you plan to make purchases will help save cost. 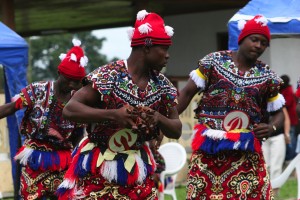 Languages: Like elsewhere in Nigeria, English is the language for business and official communications, though the city runs on its own variation of pidgin. Locals communicate in local dialects.

Safety: There are still occasional instances of kidnapping for ransom, so stay away from the outer fringes. If you have to go farther afield, you will need a security escort, which can be arranged with the assistance of your hotel or the local police. In the city center there is very little risk to your personal safety.

Tipping: Security personnel and some hospitality workers (like waiters and bellboys) expect to be tipped for helping out with a minor errands but tipping is at the visitor’s discretion, not compulsory.

Dress & attire: Likewise, there are no particular dress styles among the residents—you’re likely to see residents either smartly or casually dressed. Traditional attires are worn on weekends by both the young and the old to social events (like weddings, birthdays, and age-grade meetings) and to church.

Health: There are specialist hospitals, like the 89-year-old Braithwaite Memorial Specialist Hospital, which handles a long list of medical emergencies and cases; it also manages the state’s free health care services, instituted by the state government since 2000. Gynescope Hospital (G. U. Ake Rd.; gynescopesh.com) is another specialist hospital, privately owned and commissioned with fanfare in mid-2013.