Oran, Algeria’s “second city,” is somewhat neglected, but still has a lot to offer the intrepid tourist. Most Europeans and Americans tend to avoid Algeria completely since travel advisories (which don’t apply to coastal cities such as Oran and Algiers) were instituted in early 2014, but this is a pity because there are numerous fascinating monuments, top-notch hotels and restaurants, and a thriving cultural scene in Oran that includes the hugely popular rai music which originated here.

The city was founded n medieval times by Moorish traders, then captured by Spanish, then the Turks, then the French. The Portuguese once tried to take the city but failed, so we’ll never know what influences they might have left. All of these cultures are of course reflected in the vibe throughout the city, and as noted, in the architecture. Before the Algerian war, Oran had one of the largest European populations in North Africa, and some of that culture is still reflected in the types of cafes and cuisine you’ll come across.

The layout of the city reminds one of Nice — and of course it was once part of France — and is largely influenced by French architecture, particularly from the 1940s. The boulevard has some of the best architecture in the city, as well as restaurants, cafes, and interesting shops. The area is usually full of locals whether by daytime or night, and makes a wonderful place to spend your time in Oran. 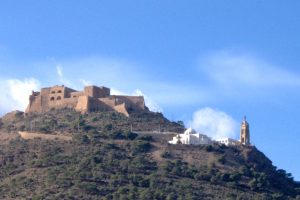 The city, which is divided into a modern, French-influenced section and an older Spanish-style quarter, tends to be dull at the edges but gets more interesting the closer to the center you get. And it is wandering around the city itself that provides the best experience. The Great Mosque (built in 1769) is the spiritual centerpiece of the town, but unfortunately it’s a little worse for the wear since it was bombed by militants in 1995.  The Cathedral de Sacre Coeur is a beautiful former church which was converted into a public library after Algeria gained independence from France. It’s a can’t miss location, especially if you are an architecture geek. Yet another converted building is the Great Synagogue of Oran, which was a place of worship for the Jews who once inhabited the city, but it has been a mosque since 1975. Then there is the city theatre (Le Théâtre) that features ornate architecture and is open to the public daily.

If these don’t suit you and you’re looking for something more grand, check out the Qasr el-Bey (Bey Castle) or the Citadel de la Casbah. Bey Castle was built in the late 17th century in an area named the Derb. You can’t just walk into it though, but must get permission from security at the gate — most likely they will let you through. The Citadel is located out over the water with incredible views on three sides. It’s located just 2 km east of the city in the Mers El-Kebir section. It was built during in pre-colonial times and used for defense purposes from invading armies. To get there, start at Place du 1er Novembre (also worth checking out) and take the Rue Mehali Mokhtar all the way up to the castle entrance.

For a touch of history and culture, go to the Demaeght Museum, which has exhibitions covering thousands of years of artifacts from the Maghreb, along with a special exhibit dedicated to Oran. If stuffy history isn’t your thing, it also features an animal exhibit. The Palais de la Culture hosts many cultural and artistic events and there is also a theatre inside for musical and theatrical events. Check out the calendar when you get to Oran for showtimes. 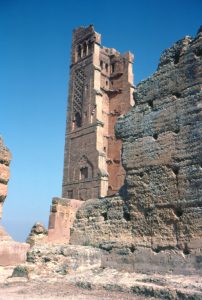 Oran is blessed with fantastic geography and splendid ocean views. Take a trip to the top of Murdjajo Hill where you can take in a view of the entire city as well as Corniche and the coast on the other side. You can take a cab to the area, hike up the hill, then reach the Spanish church of Santa Cruz, a stunning white-washed church that dates back all the way to the 16th century. just above the church is the Fort of Santa Cruz that looks out over the bay.

A bit farther out of the city (slightly less than two hours by car) is Tlemcen National Park and is one of the most beautiful areas near the coast. Featuring forests, waterfalls, and cliffs, the area makes a great place for a day hike. For archaeological buffs, many ruins are in the area including the ancient city of Mansoura, and the Mosque of Sidi Boumediene. It’s pretty far off the typical tourist radar, but you’ll be able to share great pictures with your friends once you return and get some travel-cred.

For amazing local seafood and impeccable service, try Restaurant Les Gazelles. Located just outside the city on the beautiful Algerian coast, this restaurant features fresh daily catches grilled up to order and excellent views. It makes a great place for a classy dinner or to take a date at sundown. For more great views of the surrounding surrounding area and ocean while you dine, try Le Petite Chalet. The ambiance inside is a bit better than Les Gazelles, though their menus are somewhat similar. Between these two restaurants, it’s hard to say which has the better view. We recommend going to both and seeing for yourself.

If you’re looking for great food on a budget, go for It Side. Located in Ain Turk placette, it features quality steaks and Turkish style pizzas for reasonable prices. The inside is clean and the staff is friendly and well attentive. If you’ve never had turkish pizzas, you are in for a treat as they are well spiced and while not the same, can give Italian pizza a run for its money in flavor.

There are numerous places to stay in Oran, and while many of the buildings are rather old and sometimes in need of rehab, there are a quite a few hotels that have modernized nicely. The Sheraton Oran Hotel & Towers is one of these and has several excellent restaurants, an onsite swimming pool, and centrally located on the boulevard — perfect for shopping, strolling, or a day at the beach. Rooms are modern, well kept, and offer speedy WiFi.

For something in a more historic and cosy setting, the Royal Hotel Oran has both an exquisite exterior and interior and is part of the MGallery Collection. Located directly in the city center, this historic hotel is an easy choice if you are visiting as a tourist to explore the best parts of Oran. Inside the lobby you’ll find luxurious furniture and paintings along with a professional staff waiting to greet you. An onsite sauna and steam room will help you relax after a few nights out living it up in the city’s party scene.

If you’re in town for business, then Le Meridien Oran Hotel & Convention Center provides nice accommodations and is where many of the large events are hosted in the city. The food in the onsite Italian restaurant is excellent, and the bar is well stocked with great bartenders, though the prices tend to a bit stiff.

To get to Oran from Algiers just take one of the trains that leave several times a day. Or you can fly in directly to Oran’s Es Sénia Airport which is served by Royal Air Maroc and Iberia Airlines.

The center of the city and Old Kasbah are easy to walk around, but of course the entire city can’t be covered on foot. Cabs are ample and not that expensive, while a tram with 32 stops in the city was opened in 2013. Tickets for the tram can be purchased from vendors at the stops.

Walking around the Old Kasbah at night is not the best idea, but most of the city is relatively safe. Use your best judgement when out and about, summers can get very crowded and the city gets noisy late into the night.

Attire: Women in Algeria typically cover their heads and often wear traditional Islamic clothing. Visiting females should cover their arms and legs and wear a headscarf as well, as to avoid any possible issues. Though these traditions are slowly changing as Algeria modernizes, it’s still a good idea to not stand out as a tourist.

Location: Oran is located on the northwestern coast of Algeria, 432 km (268 miles) fro mm the capital of Algiers.

Tipping: Tipping is generally not necessary, but it is good to round up to the next 10 dinars.