When the rest of South Africa is shivering its way through winter, KwaZulu-Natal’s Dolphin Coast basks in the warm glow of temperatures that frequently reach the low eighties (Fahrenheit). This makes the Dolphin Coast, which stretches from the Tongaat River to the Tugela River mouth, the perfect destination for adrenalin-pumping outdoorsy fun. The rapidly growing holiday town of Ballito, which is a mere 15-minute drive from King Shaka International Airport, is the ideal base from which to explore the Dolphin Coast. 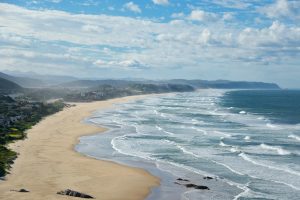 When it comes to good surfing spots, the Dolphin Coast has them in spades. Most of the waves are right-hand point breaks, but lefts can be found during certain conditions. Umdloti has wonderful peaky breaks with a point break at the old launch site. Heading north, Westbrook is a top right break, but bring your manners if you pop in! Salmon Bay has lefts and rights and works on a north wind. Surfers Bay – where the annual Mr Price Pro international surfing competition is held – and Bog Bay are popular spots. Salt Rock main beach has lots of peaky options, and, if you don’t mind the sharks, Tiffany’s reef can be world class on the right day.  If you want to catch some waves, head down to The Secret Spot (+27 32 525 5480), where you can hire a board or take a lesson with a professional surf instructor. The surf camp, which is situated close to Chaka’s Rock Beach, also offers accommodation for surfers and surfing safaris to all the best surf spots along the north and south coasts of KwaZulu-Natal.

Go with the wind

If the wind is blowing in the right direction, large kites add splashes of color to the coastline as kitesurfers take to the sea. Kitesurfing, which is essentially a combination of windsurfing, wakeboarding, surfing and parasailing, has become increasingly popular along KwaZulu-Natal’s north coast. You don’t have to be a pro to get in on the action; in fact, you need never have even laid eyes on a kiteboard. Surfers Ballito Bay (+27 32 946 0018) offers lessons for beginners — between two and four hours in duration — with instructors who have qualifications from the International Kiteboarding Organization. 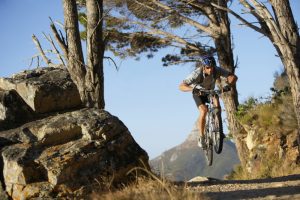 South Africa is one of the top sugarcane-producing countries in the world, and most of that sugarcane is grown in KwaZulu-Natal. There isn’t a better way to check out the rolling hills of sugarcane than on a mountain bike! Holla Trails (+27 82 899 3114), which has an agreement with farmers in the area that allows mountain bikers to access their land, offers up 340km of marked and sign-posted mountain biking trails.  Although you’ll mostly be riding through sugarcane, there are a few beautiful pockets of indigenous forest, especially close to the river. You may stumble across the occasional buck, mongoose or snake, so keep your eyes peeled! The trails cater to both novice and experienced riders, and have a little bit of everything: road, technical single track, bridges and some drop-offs. You can hire everything you need (bikes and helmets – R200 to R250/ $18 – $22) from the Holla Trails Centre at Collisheen Estates. A day visitor permit will set you back R55 ($4.90) or R15 ($1.30) if you intend to hit the trails in your running shoes instead of on a bike.

A leap of faith

For a thrill that requires a little less work (and results in fewer bruises), check out the Ballito Zipline Tour. Club Venture (+27 32 942 8014) runs a two-hour, 1.5km zipline tour (R450/US$40 per person) that takes you over the Sampoya River. Get a bird’s-eye view of your surroundings as you slide along steel cables from one platform to the next. Don’t worry, a safety harness will ensure that you don’t plummet to an untimely death! The parazip adventure — a 400m cable that stretches from a cliff to the earth — is great for those who have always wanted to try paragliding but haven’t had the means or guts. The parachute attached to your safety harness gives you the sensation of paragliding, but you are still securely attached to the cable.

For an entirely different perspective on the Dolphin Coast, take a microlight flight over the sugarcane plantations and coastline. At the Ballito Microlight School (+27 82 659 5550) you can experience the thrill of open-cockpit flying without actually having to learn how to fly. The school offers three set “fun flights” (duration ranging from 10 to 30 minutes), and custom flights can be arranged if you have your own route in mind. It’s a great way to take in the sights – there’s a good chance that you’ll catch a glimpse of the bottlenose dolphins that give this stretch of coast its name, as well as game fish, whale sharks, giant mantas and turtles.