Just like Afrobeat, the genre of music that birthed it, The Shrine is a unifier of sorts. Its doors are open to just about anybody, regardless of social standing, political leanings or religious beliefs. The music brings them all under one roof and while the fun lasts, everyone—from the foreigner to the Nigerian—is all smiles. The rich sit with the poor, and Muslims pump palms with Christians over bottles of beer, sticks of cigarettes and plates of ‘small-chops’ (finger foods, if you please) while Kuti belts out song after song, nearly all of which have been rehearsed on the previous Thursday. 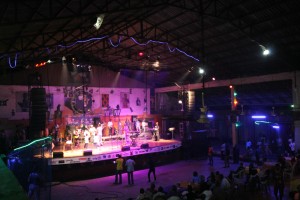 Kuti, who turned 52 in June, has been on the stage for a little over an hour when I step in. Backed by 12 band members, he is dripping with sweat (a thick white towel is tucked within easy reach under the piano) and obviously relishing the moment. Six female dancers gyrate both on stage and off it. Some of the guests are up on their feet, drinks in hand and moving to the beat.

Like his father–the legendary Fela Kuti–before him, Femi is a self-appointed voice of the masses, the powerless and the voiceless. So every opportunity he gets, like during the Sunday Jump, he speaks to power boldly, candidly and sometimes with a smirk. “The argument of the people,” he says, “is the argument of truth.” His songs are often laced with his opinions on various trending subjects in Nigeria; and being a widely travelled performer, guests are also most likely hear him interpret global happenings as they affect Africa as a whole.

When I visited in early September 2014, his anger on that particular evening was directed at the Nigerian Army, which is currently battling the worst case of terrorism ever to confront in the Nigerian nation. He knocked the recent privatization exercise in the power sector as well the $20m scandal involving the Ministry of Finance. His listeners, young or old, can relate to these ‘Yabis’ (slang word that means ‘banter’ or ‘criticise’) aimed at the establishment, because they are just offshoots of stories making the rounds in the local media, sometimes dominating the cover pages of the press for weeks.

“How many songs are we going to sing before they hear of the suffering of the people?” he asks without actually expecting a response. “Now that the politicians have taken over, [there is] nothing to show for it.”

Besides the music, the Shrine also doubles as artistic showroom: it has a mini-library and souvenir shops selling Felaisk mementoes; its walls are covered in Africa-themed motifs, paintings and photographs of the late Fela (and extended family) as well as of some of Africa’s accomplished personalities (like Nelson Mandela and Kwameh Nkrumah) and African-American icons (like Martin Luther-King and Malcolm X).

Perhaps the most nostalgic of these wall exhibits are the classified adverts in the dailies promoting the weekly shows hosted by the senior Kuti himself in the 1970s and the 1980s. “We wish to inform the government that the Afrika Shrine is not a night club—it is a place where we come to worship the God of our ancestors,” reads a declaration in one hanging near the stage.

And as worshipping of the ancestors go, there is an actual shrine in the auditorium, dedicated to the memory of the departed Afrobeat creator, who in his lifetime was known as the “Chief Priest” (among other aliases). A recent photograph posted on the Shrine’s Facebook page shows Femi paying homage at this spot, before and after an overseas trip. Perhaps, doing this inspires a bit of his creativity.

“As promised the last time, we are working on some new music, so that the [New] Afrika Shrine does not become stagnant,” he says to the guests, an hour before the day’s Jump would wrap up.

Outside the auditorium, a long stretch of the street is lined with vendors selling everything from sweets to suya. The atmosphere is less bouncy here as more Afrobeat buffs line up patiently for their tickets; in no time, they will go into The Shrine to get their own dose of the “Sunday-Sunday medicine.”

And as mid-October approaches, Afrobeat buffs worldwide prepare to converge on Lagos for “Felabration,” the annual series or concerts, now in its 17th year and hosted in memory of the man also known as “The Black President.”