Spending time on safari or in a private game reserve is admittedly not a cheap proposition; amazing things come at a price. And as tourism in South Africa has increased, so have prices — to a point where it is often too expensive for the average person to experience. So when a restaurant, accommodation option, or awesome activity offers a great discount or deal on admission, I’m always there to take up the offer.

One of these deals is Aquila Private Game Reserve’s winter rates (from 1 May to 31 October) of US$165 per person sharing for their standard luxury cottage. Not only does the cost include accommodation, but two Big Five game drives, a visit to ARC (Aquila Rescue Center), and a buffet-style lunch, dinner and breakfast. For me, this was a bargain I could not turn down, so I booked and headed out to this once-in-a-lifetime, luxurious experience.

With check-in 12pm, I started the hour and half drive from Cape Town at 10am and headed along the N2 Highway through the Huguenot Tunnel, passing the snow-capped mountains of Worcester. Before I knew it, I was entering the reserve. Stepping out of my air-conditioned car, I was hit by the crisp winter air of the bushveld. I quickly made my way inside where I was greeted by the friendly staff, a warm towel for my cold hands, and some sherry.

From there I was shown to the beautiful cottage where I’d be spending the evening. The one-bedroom, twin bed, stone cottage was comfortable and cozy. With an elephant-shaped towel on the bed, a coal stove for warmth in the bedroom, a huge bath tub, air-conditioning, a mini bar, and tea and coffee facilities, I knew I’d be sleeping warmly that night. The chalet also had a beautiful outdoor rock shower and a patio area that overlooked the fenced-off section where wildlife dwell. 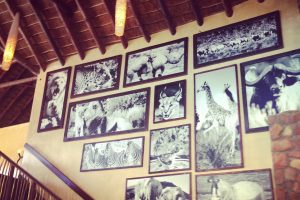 Before heading out on the first game drive, I was treated to a buffet lunch in the dining hall. The decor in this room was my favourite, with huge images of game and an amazing outdoor section overlooking the pool. The food was homey and tasty, and as a vegetarian, there was plenty to choose from. Belly full, I found a sunny spot in the  lounge/bar area. With four fireplaces simultaneously going, I could have easily taken a nap, but it was time for my first game drive.

Meeting at the reception area, a group of about 20 of us was divided into two groups. Once divided, we took out seats in the game van, where, to make our three-hour drive a little more comfortable, we were handed hot water bottles and blankets. For me, this was the ultimate delight, as the winter chill was hitting hard. After we all got cozy, our guide introduced himself, gave us a short briefing and some rules, then we began our drive.

As we approached the gate that separates the accommodation to the wildlife, our guide blurted out “oh no!” My heart immediately dropped and my head started spinning with ideas of an escaped lions, an elephant gone wild or a cheetah on the run. At closer inspection I notice two giant buffalo blocking the gateway. Our guide explained to us that a mischievous buffalo had blocked the gateway to try to get some food from the rangers, and would flip the van if we tried to get past, so we’d have to take the long route. This was just a little reminder of the unpredictable nature of these wild animals. 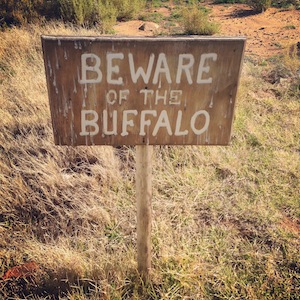 As soon as we entered the gated area, we were surrounded by the majestic Hex River Mountains and eyeful of wildlife. I first spotted a dazzle of zebras grazing on grass on my left, then a two giant male elephants on right. The guide stopped to allow us take a few photographs before heading on to the watering hole. The watering hole was peaceful, but our ranger assured us there were hippos under the water. Before we could spot one, the ranger quickly hit the pedal to metal and whisked us away over the hill, as he had spotted a herd of beautiful rhinos. I’ve seen a rhino before, but every time I do, I’m so impressed by their elegance, pure power and gentleness.

The guide shared a horrific story about poaching incident that occurerd just two weeks prior to my stay. He told us of three poachers (one a veterinarian) who posed as guests and had loads of questions. They were after the female rhino, who had one of the largest horns ever recorded. Luckily the female had been in a fight and her horn had broken off, but the poachers still managed to get ahold of one the male rhinos. 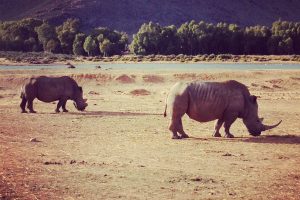 After a good two hours of seeing various bucks, dancing ostriches (males attempting to impress females), and trying to find the reserve’s only giraffe, we headed to the lion enclosure. Before entering we took a short break to stretch our legs and enjoy some sherry and some snacks close to a herd of kudu. Then we headed into the fairly large enclosure that held two male and five female lions. Due to the lack of animals in the main reserve, lions are kept separately, but they are treated to live prey when needed. There is only one short road that is surrounded by hills, and if the lions were not along this road, we wouldn’t be able to see them. We searched the hills till we spotted all seven very well-camouflaged lions. Due to good luck the lions slowly made their way down the hill, passing within touching distance of the van.

Back at the lodge, I squeezed in a bit of work (there was free wi-fi in the lounge and dining area), before heading to dinner. With a female marimba band playing some local favourites and a fireplace at my back, I tucked into some delicious food before heading to bed. The next morning I woke to the sound of a roaring lion. I quickly wrapped myself in my warmest clothes before heading tomy  second game drive, which departed at 7am. Again we headed to the gate where the buffalo still stood waiting for food, but this time he budged at the sound of the van. 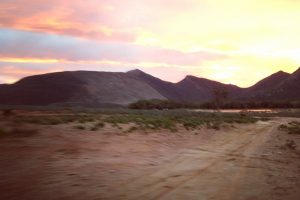 As the sun rose the reserve came to life. We saw hippos making their way to the water hole then submerging themselves, the giraffe curiously moving  closer and closer to the van, and lions curled up in a ball of warmth. After an hour we heading to Aquila Rescue Centre where we got to see and come in close contact with lions, cheetahs and leopards. After explaining what the centre does and getting a tour around it, we headed back to the lodge. I headed straight to the fully stocked breakfast buffet where I enjoyed a yummy breakfast, before packing up my stuff, hopping into my car and heading home.