“The world has five oceans” Julio says, and makes a dot for each one in the sand as he names them. “Indian, Pacific, Atlantic, Arctic, Antarctic. Five oceans for five continents.”

It’s a geography lesson on an island off the coast of another island, in the middle of the Indian Ocean. I had never pondered how many oceans existed on the planet until a few minutes ago, but Julio, who has curly black hair and who works as an accountant at a posh Mauritius hotel, remembers this from grade school.

“America, Asia, Africa, Europe, Australia,” Julio’s friend Madu names the continents. Madu has darker skin than Julio – he tell us he “has Indian in his blood” – and earns a living selling ten-minute parasailing adventures in paradise to rich tourists.

“I thought Antarctica was a continent too,” my friend says. 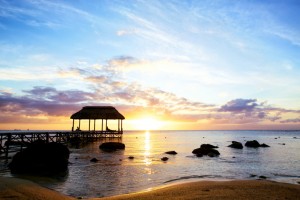 But the local boys only know five. They shake their heads.

We’re practicing our geography now, reeling off capitals for countries.

It’s easier than trying to hold a lengthy conversation. The boys speak Creole and a bit of English, French and Italian, the languages of the tourists that come to their island. They mix all four freely.

“I want to learn Russian and German next,” Julio says.

“Are there a lot of Russian tourists here?” I ask.

The young men know many things, but they are so different than the things I know. They can identify sea urchins and coral on the beach. “When sea urchins die they are washed ashore and their spiky purple tentacles dry up and fall off, leaving only a hollowed out shell of pink or yellow or brown,” Julio tells me when he spots one on the beach.

“It must have tasted good,” Julio smiles as he tells the story. “Dodo means sleep, so it was a lazy bird. I’m sure it was easy to catch.”

I knew Dodo birds were extinct, but I didn’t know they came from Mauritius until Julio told me. (Nor that the Dutch are supposedly responsible for the collective death of their species.)

Here’s what Julio and Madu don’t know, however: they’ve never heard of Thailand. When I tried to teach then hello in Thai, they rolled the world around awkwardly in their mouths.

“No, Thailand, a country in Asia.”

We left it at that.

Earlier, Julio and I went swimming. We raced each other to buoys in the deep water hundreds of feet from the shore, and had contests to see who could stay under water the longest. He won. 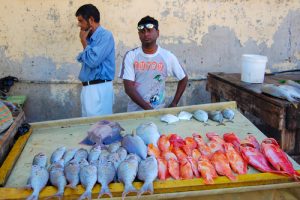 We talked about our families as we fought the strongest current I’d ever felt. He wanted to show me some coral, but I couldn’t seem to get to it. Every time I tried to swim out the current pulled me back. Standing was useless; I’d be quickly pushed on my back, and carried away.

Julio told me his father is a fisherman. Every night they have fish and seafood for dinner, my stomach growled at the thought, but Julio just shrugged:

“I like lobster, but when you have it every night it’s not a luxury anymore.”

I told Julio my father is an economist, and he grinned and said “very good.” But I wondered if he had any idea what I was talking about. He was more into talking about music. He liked Nirvana a lot he said. That was his favorite band.

I told him I interviewed Courtney Love once, but he didn’t understand the world “interview.”

“I met her, Kurt Cobain’s widow, and put what she told me in the newspaper.”

“I like Bon Jovi, too, and Metallica, oh and the song from Mission Impossible.”

Mission Impossible? Didn’t that movie come out decades ago? But the way Julio speaks it is like it was just released.

How different life is on this island in the middle of the sea. Five oceans, but never heard of Thailand?