Whether it involves strange snail races or hurling animals off buildings, European countries have its fair share of odd festivals. Here are 15 of the strangest European festivals you’ll find. 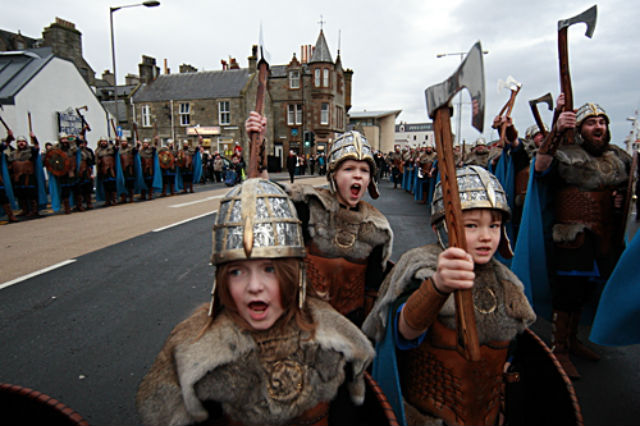 This is the only time of the year when hundreds of people gather outside and unleash their inner Viking warrior. Hundreds will be sporting Viking gear, battle axes, helmets and furs for this strange festival. When the sun sets, the wannabe Vikings will retire for the night by watching a Viking longship go up in flames over the water. Meanwhile, somewhere, Erik the Red sheds a single tear. 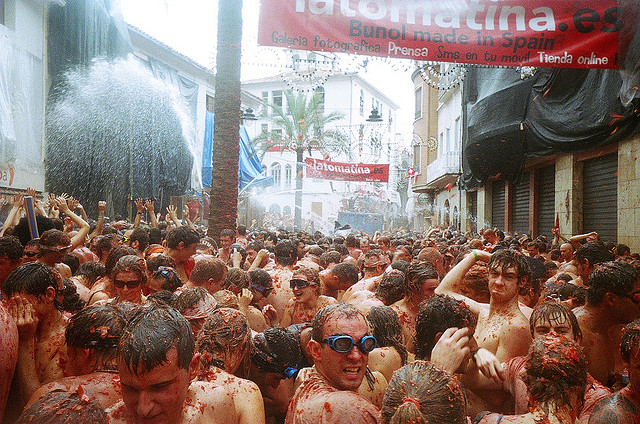 You say tomato, they say tomatina! And before you know it, you’ll be covered head to toe with wet mushy tomatoes. At this odd Valencia festival, 40,000 people gather together, get half naked, and attack each other with 100 tons of tomatoes–all in honor of the Virgin Mary. 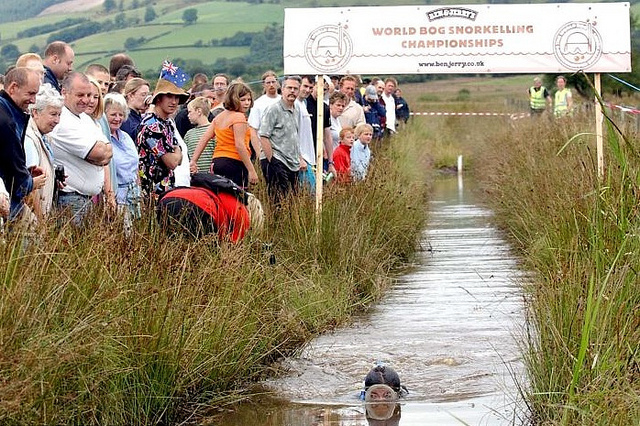 At least it’s no Bog of Eternal Stench, but it still doesn’t help that the water is murky and filthy. Each year in August, this Welsh festival has competitive bog races where hundreds come to watch the brave (and very stupid) snorkelers uncomfortably snorkel their way to a championship.

Someone call the child protective services! In this small town in Spain, it is customary for several high jumpers to dress up in yellow and red to represent Satan. Then some of the villagers’ parents will donate their babies to be subjected to this ridicule of being laid on a mattress while the supposed Devil riskily jump over them. 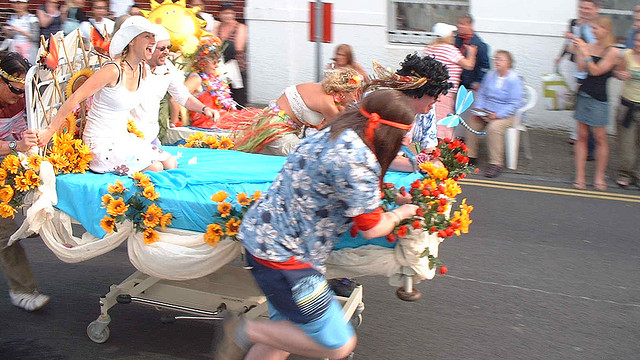 5. Festival of the Unusual – Brittany, France

Got an unusual yet odd talent? Festival of the Unusual is the perfect festival to show off your natural talent. Whether it is the farthest seed spitting, racing hospital beds or displaying an unusual choice of clothing. It doesn’t get any more weirder than this one where the unusual is considered the norm. 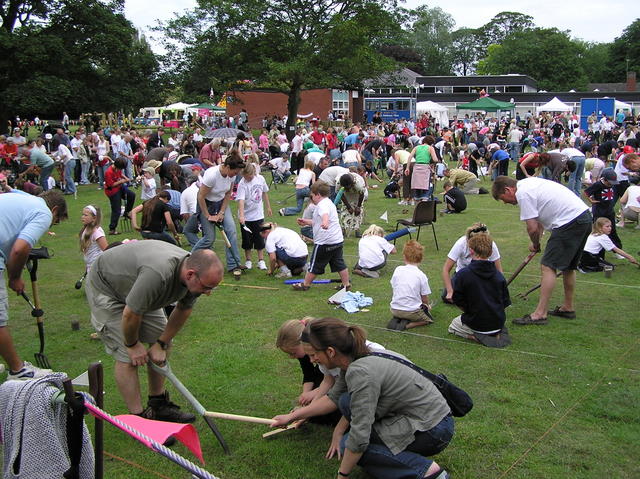 This ludicrous England festival will annoy all the early birds when they see the human locals crouching to the ground trying to serenade the worms to leave their hole. The catch is, you will be disqualified if you should dig to force the worms out.

This absurd Spanish festival is (thankfully) no longer legal to host (although, some reports they still do it anyway). The villagers will pick out a few of their goats, often bind them, and then throw them from one tall building to another (hoping to catch the goats). But we all know that not every goat came out of this unharmed.

Are you a husband with a cheating wife? Then book a trip to Rocca, Italy and participate in this parade of men mourning over their broken marriage. The horns represent the scorned husbands, and the men can be seen parading on the street weeping or crushing things that remind them of their unfaithful spouses.

9. Day of the Geese – Lekeitio, Spain

Leave it up to Spain to leave PETA frothing at the mouth with hysterical rage. Because goat throwing wasn’t terrible enough,  this (not yet banned) festival calls for a gathering of hundreds of spectators to watch live geese hang from a rope over a river while men from a boat, in multiple attempts, try to jump, clobber, and pull their heads off. Whoever pulls off the heads of the geese will be declared a winner (and a dirtbag). 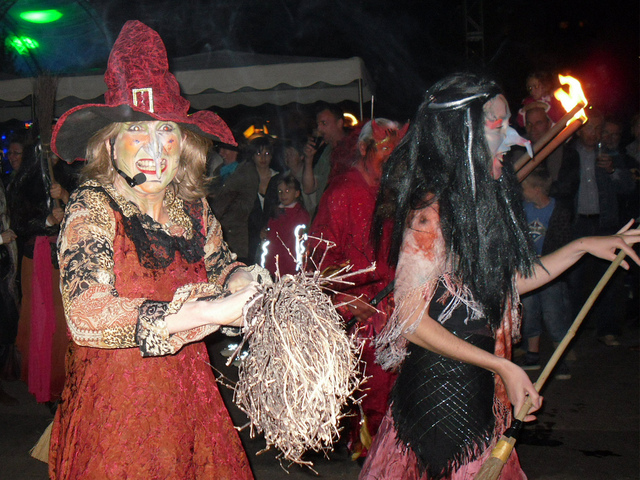 This centuries old festival used to be a gathering for local villagers to do rituals that would hopefully ward of witches and warlocks. Today, this festival has taken an ironic turn to become a celebration of witches. Many attendants will dress up as witches with broomsticks and hold bonfires that will have their original villagers rolling over in their graves. 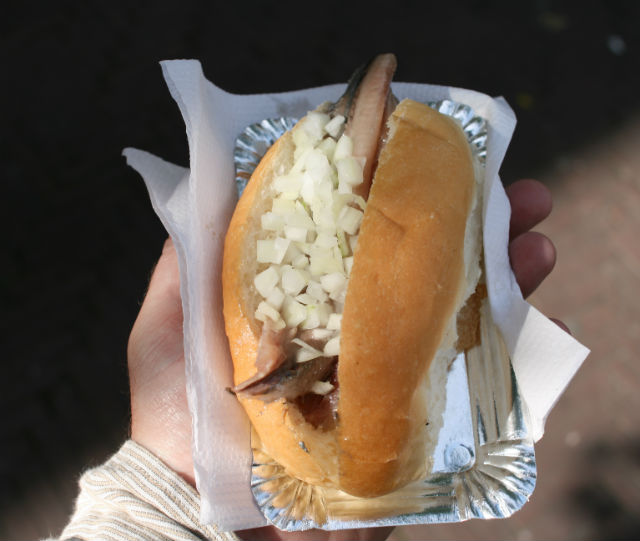 Who doesn’t love herrings? Oh…most of you don’t? This extremely oily fish is the center of attention at this annual Normandy festival where people can taste multiple herring recipes including herring crepes, herring tacos, and herring pizza. If you don’t feel funky enough after the sampling, you can participate in a competitive herring eating contest. Winner takes all (of the herrings)! 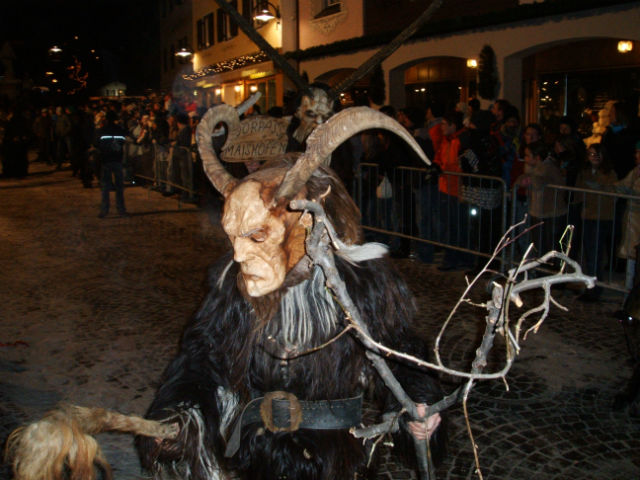 Christmas is a magical time of the year. But in Alpine countries, Christmas could be what every naughty kids dread. The krampus is a goat-like boogey man that taunts misbehaved kids, kidnaps them, then eats them. At this festival, a handful of people will dress up as krampus to remind the kids that they better listen to their parents. So next time you get that coal in your Christmas stocking, you might want to hold off the complaints. 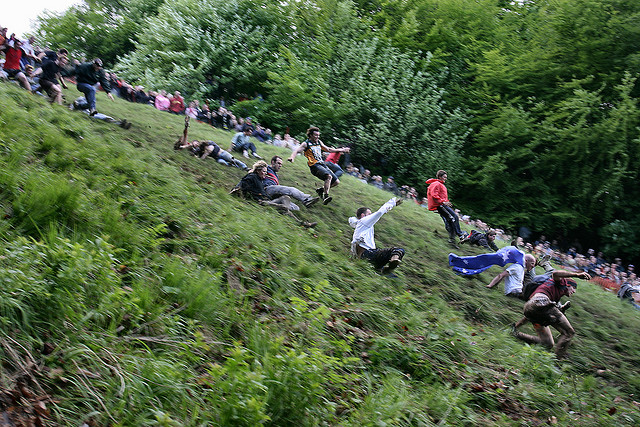 Cheese is how they roll. This odd cheese rolling festival has its competitors stand on a steep hill, roll a cheese, and then hurl themselves down the hill trying to catch it. Whoever reaches the bottom first with their cheese is declared the winner and most likely needs an ambulance.

It’s Jules Verne meets Edward Scissorhands. This Leipzig festival is a popular attraction for steampunkers and goths (no account for the Visigoths though) where they can show off their tailoring and costuming skills. This festival is a fantastic way to view the most unusual and odd outfits from steampunk ringmasters to a gothic Marie Antoinette.

That’s one pudding boat that will make Bill Cosby cringe. The Yorkshire Pudding Boat Race is exactly what you think. Boats made of Yorkshire pudding are carefully put together, then light-weight adults or kids race in them and prey it doesn’t sink.