Kenya’s Great Rift Valley is famed for its world class tourist attractions, which include wildlife-rich game parks, exotic lakes, and distinct geography. The Menengai Crater happens to be one of these.

Menengai Crater towers magnificently over Nakuru, some two hours drive from Nairobi. This extinct volcano is famous for being one of the largest remaining volcanoes in the world.  It takes about 10 minutes to access the crater from Nakuru town.

But what is quite interesting about Menengai Crater are the mysteries and legends that precede it.

The locals have all sorts of stories about the crater. Some are as superstitious as they come.

Stories of people disappearing in the crater have been often told. Others have claimed to have found their relatives in a trance after they lost directions and found themselves in the crater.

The Maasai community living around the area has their legend, which claims that the fumaroles arising from the crater bed are the souls of the vanquished seeking to find their way to heaven.

This legend perhaps arose during the 19th-century Maasai war, in which the Menengai crater was the site of a bloody battle between different Maasai clans vying for the pastures of the Rift Valley slope and Naivasha. The Ilaikipiak Moran, so goes the legend, were defeated by their southern neighbours the Ilpurko Maasai, who reputedly threw the former over the crater edge.

Despite the creepiness that is associated with the crater, spirituality meets legend in the crater. It is common to find pilgrims at the site. They sojourn from all over the country to fast and pray in the caves at Menengai crater.

Ask them and they tell you that they feel close to God when praying in the crater. The crater is considered a holy place, maybe to mirror the Israelites holy connection with Mt. Sinai.

To get to the top of the crater, make your way up the walls until you come to a roadblock that is manned by the Kenya Forest Service. An entry fee of US$8 is all that is required to enter. 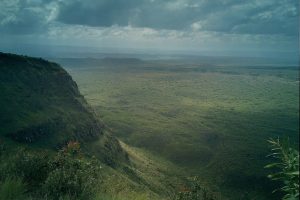 A sign post erected by the Rotary Club of Nakuru greets you at the top. The sign shows distances and general directions in kilometres of several places in the world such as Tokyo 10,988 km, Cape Town 4,186 km and New York 12,360 km. The top offers a breathtaking view of Nakuru town, Lake Nakuru, Lake Bogoria, Mt. Longonot as well as the crater itself.

Various bird species as well as hyenas, baboons and dik dik can be spotted at the crater. The descent down the crater looks pretty easy. However, it is the long trek upwards that is torturous. You need to be an expert hiker to conquer it!

With its amazing scenery, Menengai crater is indeed one of the most attractive places in the Rift Valley. The hiking, trekking, camping and picnicking options available to the visitor offer the promise of a rewarding trip. There are also caves that can be explored, but they tend to be frequented by those on religious pilgrimages, so do be respectful of them.

This article was originally published on September 12, 2014.