Most travelers like to do at least a little research before heading off on their travels. This is traditionally done via guidebooks, novels or websites, but watching films can add another aspect to pre-trip discovery — and perhaps provide more vivid inspiration than is possible via the printed page or still photo.

With that in mind, here are a handful of films that I recommend to help get a feel for Morocco and let it seep into your imagination — and even the very pores of your skin. 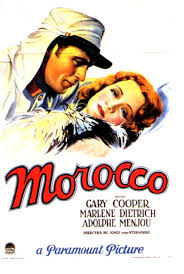 Josef von Sternberg’s 1930 production of Morocco stars the legendary Marlene Dietrich as a cabaret singer, and a very young Gary Cooper as a French foreign Legionnaire. They fall in love, but their relationship is marred by his womanizing, and the appearance of a rich suitor who wants Dietrich for himself. Spoiler alert: In the end Dietrich leaves her wealthy suitor to join the Moroccan women following the Legionnaires into the desert to be with her true love.

The film is one of the few to give an idea of the life of a legionnaire soldier in Morocco, and the scenes are very well observed. Marlene Dietrich created a sensation at the time by wearing a top hat and tails in the local night club and kissing a woman who gave her a white rose.

The classic film Casablanca (1942), starring Humphrey Bogart, Ingrid Bergman and Claude Raines, was actually made in a Hollywood studio, but it does manage to capture the world of spies and refugees in Vichy-controlled Morocco just before the Torch Allied landings in 1942. The atmosphere is true to life, and the street scenes are not too shabby. And of course, it’s a great romantic film.

Alfred Hitchcock’s The Man Who Knew Too Much (1956), with Jimmy Stewart and Doris Day, depicts a family vacationing in Morocco who accidentally stumble upon an assassination plot. The conspirators are determined to prevent them from interfering, and all kinds of drama ensues: the film features a famous scene in Marrakech’s Djemaa El Fna  square where one of the characters is stabbed. The fortress-like police station on the square features prominently. The film captures some of the excitement and drama from the year in which Morocco achieved its independence.

Filmed in Morocco, but not about Morocco

Morocco is also popular with film producers who use the country’s varied desert scenery, mountains, green valleys, and imposing forts as a stand-in for other locales. The most notable recent one is Martin Scorsese’s 1997 odyssey Kundun, which used the majestic Kasbah Toubkal and the Atlas mountain regions around it as a proxy for Tibet.

David Lean’s epic Lawrence of Arabia (1962) with Peter O’Toole, Omar Sharif and Alec Guinness was shot around the desert town of Ouarzazarte, and in the Kasbah of Ait Benhaddou.

Pathé Films recently released a number of short documentary travel films, and there are some gems on Morocco. One of my favorites is Marrakech Desert Paradise, which was made in 1948 (you can see it on YouTube). It provides a glimpse into the mysterious Morocco of yesteryear, which is slowly disappearing. The narrator emphasizes the exoticism of the country in the 1940s when he remarks that a short flight from London means that you wake up in the land of David and Goliath. In scene after scene in the Marrakech medina and the Place Jemma El Fna, merchants sit with their wares under stretched-out skins to avoid the sun, snake charmers entertain the crowds, women wear traditional white veiled dresses, and the men are in djellabahs.

You can pick out scenes in the medina which you can recognize today, but most things have changed dramatically: there were no motorbikes or handicraft stalls, and few tourists then. Winston Churchill is even shown arriving at the Mamounia Hotel with its palm tree-lined gardens. Pathé also has films on the French protectorate, and fascinating street scenes from the 1920’s through to independence in 1956.

A film made by Al Jazeera called Casting Inshallah (2011) offers an intriguing look at life in the movie production hub of Ouarzazate. It is an amusing and sometimes sad examination of the people who work as extras, and how many have pinned their hopes for a better life on this often thankless job.

Of course there are hundreds more films made in or about Morocco, but in the interest of brevity I will give you a shortlist and links, so you can discover them at your own pace:

International films continue to be shot in Morocco, which also has its own burgeoning film industry and stars.

Films that have been shot so far this year in Morocco include :

Morocco even has its own film festival: the Marrakech International Film Festival in December celebrates the best in cinema from both local and international talent.