This is the tale of two historic palaces  in Fez, one with an owner who moved with the times, and one who clung to the past for too long refusing to face up to modernity. Both are well worth a visit to experience the glory of Moroccan architecture and decoration, and to get an idea of how the Moroccan ruling classes once lived.

Palais El Mokri, which is located in the southern part of the Fez medina near the Bab Did gate, was built by Si Tayeb El Mokri, who served as Minister of Finance to Sultan Moulay El Hafid until 1912. He then served Sultan Mohammed V (who later became King of Morocco) as Pacha of Casablanca from 1927 until his death in 1949.

Si Tayeb was a remarkable man and a traveler who was interested in art, culture and music. He was the first Moroccan to import a grand piano, and his four wives played the lute and violin; he even installed a hydraulic sound amplification system which allowed the music to be heard in every room. 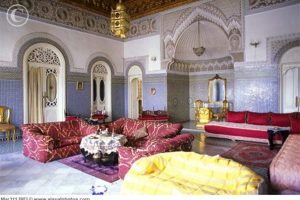 This refinement and sophistication is apparent throughout his namesake palace, which encompasses some 20,000 square feet in all, including the extensive gardens. The palace, which has a European feel tempered with oriental elements, dates back to 1906 and is still occupied by members of the El Mokri family.

My guide, Zaid El Mokri, took me there. We climbed up narrow staircases to a side entrance, which leads onto a terrace looking down on to the long courtyard. The walls, floors and pillars are painted with light blue crisscross designs, and the ceiling of the terrace is wooden with traditional painted sun motifs. The long courtyard  below is surmounted by another parallel terrace. The overall proportions are stately,

The most impressive sight is to look across the courtyard with its fountain to the main entrance. Moroccan palaces have huge courtyards for parades and courtly gatherings and receptions and the El Mokri Palace is no exception to this grand tradition.

The state room, which serves the family drawing room, reveals a 19th century European influence in features such as the huge golden cupola in the ceiling, and the shell-shaped alcove walls with uniform speckled blue design. Throughout the palace and in the state room salmon pink walls and white stucco are the dominant theme. The proportions and decorations are exact. 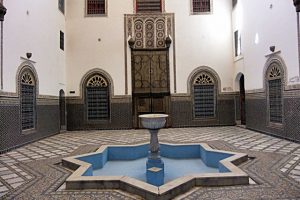 Courtesy of Islamic History and Travel

Walking up the courtyard, the Pacha’s quarters are on the left and include a hammam. At the main entrance there is a stairway down to a passage where a number of paintings and extra large photographs from Patrick Mana’ch’s collection are hung. We can see Sultan Mohammed V with French and Moroccan dignitaries (including Si Tayeb El Mokri) visiting the Elysee Palace in Paris. Another enlarged tongue-in-cheek photograph shows Sultan Moulay Yousef sitting on the Emperor Napoleon’s throne together with his sons. This captures the moment when Morocco began to open up to Europe and modernity, and high officials like Si Tayeb El Mokri travelled widely in European capitals. The new El Mokri Palace was an expression of this reaching out to the modern world whilst retaining its imperial grandeur and traditions.

The El Mokri family have done a wonderful job in preserving this palace which is in excellent condition. The need for private investment which could see the palace as a destination for events and exhibitions is paramount, but seems to be moving to a positive conclusion, so that this beautiful and historic palace can be enjoyed to the full. It has indeed been used as a film location on more than one occasion.

With some difficulty and help from outside we managed to open the huge main doors where horses would ride in and their masters dismount. We proceeded further up the hill to the Glaoui Palace, as handmade  posters announced its presence. 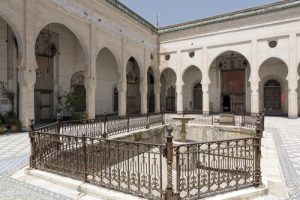 As you walk into the courtyard surrounded by great white pillars with a fountain in the center you can sense the grandeur of a feudal warlord’s palace. The painted wooden doors are faded, the rooms are dark, and the walls hold photographs of people who visited the palace and Abbou’s paintings — which are non-figurative and interesting.

The huge kitchen and the Glaoui’s living quarters and bathroom also gives an oddly personal feel to the faded grandeur. You can imagine Thami El Glaoui getting up in the morning and walking out into the splendid courtyard. It is understandable that he is officially detested because of his support of the French during the protectorate, and his cruelty and graft as he took a tithe of all agricultural produce and was immensely rich. He collaborated in sending Sultan Mohammed V to exile to Madagascar. He did repent when the Sultan and soon-to-be King Mohammed V arrived in Paris, and he called on all Moroccans to support the King, but it was perhaps rather too late. Whilst he played host to Winston Churchill, Charlie Chaplin, Josephine Baker and Colette amongst others, he remained a feudal warlord very much against the modern independence movement. 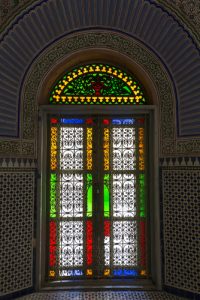 It has proved almost impossible to find an investor to take over the palace and restore it to its former glory. As with Telouet, the Glaoui’s Kasbah in the Atlas mountains, it seems to be condemned to a slow deterioration despite being part of Morocco’s architectural heritage, so much of which has disappeared over the centuries through conquest, rain and neglect.

Whilst Moroccans have traditionally had large families the problems it poses for inheritance of land and property does create difficult and this is especially so with palaces which are still owned by family members. Perhaps a national association could be founded to buy such magnificent properties as part of the nation’s heritage rather like Britain’s National Trust. UNESCO’s World Heritage program is very active in Morocco but there are obviously limits to its means and the effects of the global recession still remain. However if there is an investor out there who can preserve and renovate historic buildings and make it a profitable enterprise, here are two palaces that might make an interesting proposition for an intrepid investor with the necessary drive and determination to succeed in Fez.