Watching the sunset from the top of the single koppie (hill) that gave South Africa’s most iconic music festival its name, you understand why the sun sets so marvelously red in Africa. 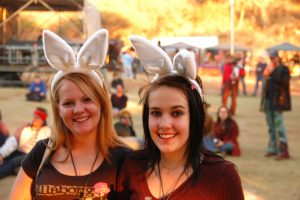 After a day of wild animals trampling, hunting and running across the plains, dust hangs a thick fog in the air, just like the dust that lingers after a day of humans stomping, dancing and jamming at OppiKoppi.

Yet unlike the animals roaming the African plains, the roaming dirties at OppiKoppi chose to be here. All 20,000 of them travelled across the country – and in some cases even the world – to spend a long weekend buried in dust and consumed by live music.

Off course, looking back at the 20-odd years that OppiKoppi has seen, you’ll see that it didn’t start out this spectacularly. Not even nearly this monumental. In fact, it all fit on top of that single, tiny koppie. A couple of friends, a farm and a birthday became a small group of people and a modest 27 local acts for entertainment.

It was a place where Koos Kombuis and Valiant Swart – two iconic and revolutionary figures in the Afrikaans music scene – could play their music freely. It was a place for friends to escape the every day drone, on a farm 210km north west of Johannesburg. Off course, that irrelevant farm’s name is now “OppiKoppi” on Google Maps. It’s not just the location for an annual event anymore. It’s the destination for a musical happening. Even the dirt roads of the campsite can be “googled”. 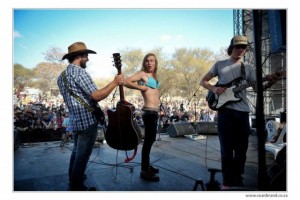 OppiKoppi attracts the most prestigious international bands of all the South African music festivals. This year alone, August Burns Red, Femi Koya, 2Lee Stark and Monkey in Boots will grace the main stages. And although it might not sound as impressive as the line-up for a festival like Coachella, it stumps the African line ups. And at the same time it manages to remain South African. Local.

OppiKoppi isn’t pompous and it’s not a place where people go in order to be seen or to Instagram their outfit. In fact, the only truly thought-out outfits are the elaborate animal suits and folks on stilts that make an appearance every now and then. Dressing just proves to be too much trouble considering the very small amount of very cold showers.

OppiKoppi is still about bringing great music to those who love it. The stage on the koppie (now better known as the Top Bar) still sees a string of performers throughout the weekend, but the main festival now sprawls itself on the flats at the foot of the hill.

There are four stages spread out side-by-side and interspersed with thorn trees and food stalls. They’re close enough to avoid hiking from the one to the other, but far enough to let the open sky mute the sound between them.

Naturally, local music still dominates the lineup, but in a good way with festivalgoers jamming just as hard to their favourite local acts as they would to the foreigners. The Red Bull Stage, on the far side of the koppie, keeps the electro-boppers happy.

Beyond Oppi’s main festival area lay the camping grounds, better known as Mordor. Because where 20,000 people are confined to a relatively small space, things tend to get a little crazy – in the dark sense of the word. But these 20 000 people are also the proof that it can’t be that bad. The porter loos might reek in the mornings and a few thorns have probably penetrated a foot or two, but it’s worth it. In fact, the rugged environment ads to the festival experience. And where there’s sunshine, music and beer, it’s difficult not to be happy.

20 years have also taught OppiKoppi efficiency and effectiveness. Cash isn’t accepted anywhere within the festival grounds except if you’re loading it onto your cashless card. This card is then simply tapped on the various pay points. The stages alternate between bands, giving each enough time to set up and do sound checks, thereby not letting the schedule lag behind.

These things add to the festival experience and perhaps they even improve it, but after all the individual things that make OppiKoppi great have been said, one is still left feeling that you haven’t conveyed that excitement, comfort and awe you feel when you think of OppiKoppi. The feeling that you’ll go back in a second if someone gave you half a chance. The feeling that every second was memorable, even if you were simply eating a breakfast wrap and watching Finding Sugarman on the big screen.

It’s captured in those times when you don’t feel the need to talk to your festival-buddy because you both know that this is a moment best experienced without words, simply letting the music sweep over you, the bodies next to you aiming your own sways and stops. Sometimes it’s not about a list of things that make Oppi Koppi the best rock festival in the Southern Hemisphere. It’s simply the certainty, the conviction, of knowing that it is.

15 Festivals In South Africa That Will Awaken Your Senses