Whether it is a stroll down the famed Avenue de Baobabs just outside Morondava, staring up at a line of giant trees more than a thousand years old, or watching lemurs hop from tree to tree while floating down the Tsiribihina River in a dug-out, Madagascar’s hard-to-reach western region offers plenty of reasons to visit.

Divided in two parts, with no roads linking the northern and southern portions, travel here is no easy feat  — unless you’re wealthy enough to charter a private plane. But should you attempt, it is well worth the effort, as you’ll likely have this sci-fi landscape of spiked and spired karst forests and miles of white sand beaches bumping up against a tomato bisque hued sea (sadly a result of erosion and pollution, but striking looking none the less) mostly to yourself.

Here are three top reasons to visit Madagascar’s “wild west.” (Note these are also the most accessible attractions.) 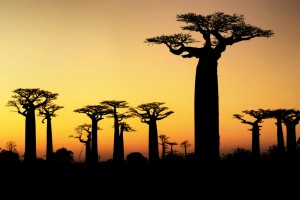 One of the most photographed spots in Madagascar is the Avenue des Baobabs, where ancient trees tower above you in a near straight line on either side of the road. This road is located about 15 km north of Morondava, along the road to Belo-sur-Tsiribihina. The best times to visit are at sunset and sunrise, when the colours of the trees change and the long shadows are most pronounced. The trees here are as old as 1,000 years, and the kind of awesome sight that stays planted pleasantly in your memory for a lifetime. For something different try a guided ATV bike tour with Loc Decouverte (tel: 032 04 70 619) down Baobab Alley.

The town of Morondava is the main access point to the alley, and has its own airport. Air Madagascar flies here regularly from the capital, or you could take a taxi-brousse (not recommended, the trip take 12-hours and is a blood pressure raiser). Morondava is a laid-back seaside town with sandy streets and gently decaying clapboard houses. The area around Morondava was once was the epicentre of the Sakalava kingdom, and home to the burial grounds that made them famous. The Sakalava people, whose roots are more African than Asian, are known for burying their dead in elaborate, erotically carved tombs often depicting oral sex and other acts considered taboo by the tribe in life, but acceptable in death. Sadly the sacred tombs are no longer accessible. They where pillaged to the point of destruction decades ago – mostly by relic hunters who sold the poached erotica to unscrupulous art dealers. Following this horrible desecration in the 1970s and 80s, the Sakalava now (understandably) keep the location of burial grounds (still containing intact tombs) top secret. It’s important to respect their privacy. If you are lucky enough to be invited to visit a Sakalava tomb, please keep your hands to yourself and take only photos.

Drifting leisurely down the Tsiribihina (Tsi-ree-been) River in a traditional wooden pirogue is a surreal Zen experience. The air is silent except for the plunk of the local piroguiers paddle splashing against the dark curtain of water. Lemurs hop from tree to tree and fish swim alongside your boat – yeah if looks as much like a Disney movie as it sounds; it’s definitely trippy. The journey takes three days and covers a 146 km stretch of river that allows access to areas that can only be seen by boat. The scenery is beautiful and varied – my favorite part of the route goes through the striking Tsiribihina Gorge. Lunch is taken in the shade of giant trees on the banks or next to cascading waterfalls, and camp is made each night on the flat white sandbanks in the shallows. You’ll be sleeping in tents so don’t expect anything fancy, but roughing it is well worth the effort in this case. 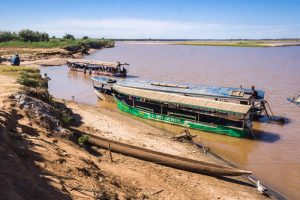 Depending on when you visit the trip is very different. During the April to November dry season you’ll experience great weather and be able to camp on the sandbanks, but the river can also get crowded. This is one of Madagascar’s top tourist attractions – the proximity to the Central Highlands makes it accessible – and during French school holidays it can feel a bit like bumper boats on the river at times.

If you do the trip when the monsoon rains come between December and March, however, you’ll find fewer boats and although you may get wet and you don’t get to camp, you do have a very local experience for the three nights on the river – instead of sleeping under the stars, boats dock by villages and you spend the night with a local family, which is an equally unique experience.

Miandrivazo, where the trips begin, and Antsirabe, the Central Highlands town on a main road that is located east of the put in, are where river descents are most easily organized. A standard trip includes a guide and piroguiers, boats, food and water, tents, transport to and from the river, and the first and last night’s hotel accommodation. Many companies, particularly the ones in Antsirabe, combine the river descent with a visit to the Parc National des Tsingy de Bemaraha (see below). These trips last about seven days and are very recommended if you want to experience both, as transportation to this region isn’t easy. 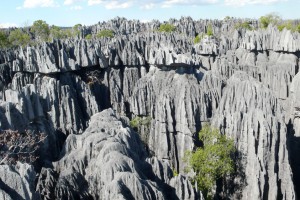 Parc National des Tsingy de Bemaraha is a Unesco World Heritage site and, at 66,630 hectares, one of Madagascar’s biggest and most spectacular protected areas. The highlight of visiting here is seeing the jagged, limestone pinnacles, known as tsingy. Formed over centuries by the movement of wind and water, and towering hundreds of feet in the air, they are quite a sight.

Walkways and bridges allow visitors to climb on top of the smaller areas of tsingy (known as Petits Tsingy), while ropes and climbing equipment are needed to negotiate the larger pinnacles (Grands Tsingy). The maze-like rock formations once gave shelter to the mysterious Vazimba, who were Madagascar’s first inhabitants, and the deep caves between them served as the venue for their ancient spiritual cults. Fragments of Vazimba pottery can still be found hidden in crevices between the rocks. The park also has about 90 species of birds, eight species of reptiles, and 11 species of lemurs, including the very cute Decken’s sifaka.