Northern Mozambique has always appealed to me and intrigued me, because of the consistently reinforced idea that this was one of Africa’s last remaining truly wild areas. The allure of an expansive region that remained untouched and untrammeled was too much for me, my boyfriend, our puppy and our miniature 4×4 to resist. With additional fuel on the roof and as much pasta as we could carry, we set off to explore the mainland of the Quirimbas National Park and then Niassa National Reserve. Concrete information on both areas was in seriously short supply, making a strong sense of adventure, curiosity and flexibility an absolute necessity. 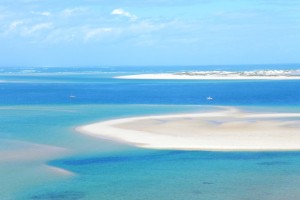 Our first destination was a small lodge in the Quirimbas National Park (QNP). In order to reach the North’s prized archipelago, it was necessary to drive through the mainland portion of the QNP. A detour in search of wildlife and wilderness seemed inevitable. We might have missed the park entry entirely had I not been peering out the window in search of a turn off. A small chalkboard map sitting outside a tiny ranger’s office makes for a very inconspicuous entryway into what could be a sensational ocean side national park. Unfortunately and counterintuitively, it actually felt as though the further we actually moved into the park, the denser human populations became. Management and enforcement in the QNP is haphazard at best. Facilities and accommodation – even scarcer.

That said, as we weaved our way between villages and along dusty trails, we eventually found the turn off for Mareja Lodge. After driving through one final village, the road quickly plunged us into a place that felt more characteristic of a national park. Dense forest, towering inselbergs and fresh signs of elephant restored our faith – and excitement – for the detour. 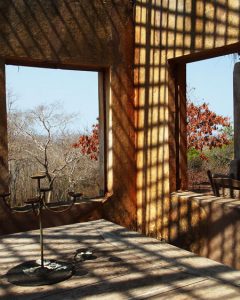 The lodge itself is a passion project, owned by a German count. Along with his wife, they have partially restored a Portuguese colonial farmhouse into a base for exploring the surrounding reserve. The place is possibly best described as rustic-verging-on-decrepit, but it retains a particular charm all the while. The porch of the farmhouse quickly becomes a spot for social gatherings, given its collection of antique bush artifacts, a medley of skulls and a compassionately cool breeze.

Staff at Mareja was limited to an equally charming crew of rangers and guards. A basic understanding of Portuguese and an affinity for miming will serve visitors well here, since the staff speaks no English and varying degrees of Portuguese. They will however, happily run bush walks twice daily in search of elephant, kudu, warthog and baboon. Be warned that wildlife in these parts is both elusive and skittish – rampant poaching has unsurprisingly done a number on their psyche. While sightings may be scarce, the experience of hiking through the bush was ever-exciting and – dare I say – refreshing from the comparatively groomed parks I have visited elsewhere on the continent.

Days quickly drifted away at Mareja, as we alternated between a soothing rhythm of hikes, naps and fire-cooked snacks. As supplies began to dwindle (and our desire for a cold drink grew), we decided to push onwards for a refreshing break on the islands, surrounded by caparhinas and seafood.

After a few weeks, that desire to return to the untrammeled bush returned. This time, we drove in the direction of the famed – and at times feared – Niassa Reserve. The reserve itself covers a territory equivalent to the entire country of Switzerland. Two relatively small villages exist along the boundaries; the rest is pure and untouched wilderness. Barring a single luxury lodge, hunting camps are the sole enterprise to survive in this landscape, and they work alongside a small team of conservationists to preserve the region against the threats of poaching and development. For those unable to stay at Lugenda, the luxury lodge, self-sufficient guests are permitted to camp at the senior staff’s camp. 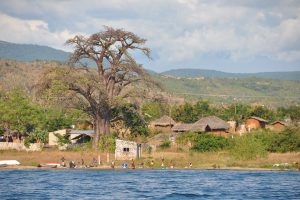 We fell into the non-luxury category and as such, we followed directions to the camp. Initial disappointment of mistaking a workshop for the camp was reversed as we drove between a series of inselbergs, stumbling upon two elephants. Having only seen a poached elephant carcass after a week at Mareja, this was a refreshing surprise. Buffalo too quickly made their presence known as the wandered along the perimeter of the camp – possibly seeking safety from the lions we could hear roaring in the distance. After months of solitude, this tiny corner of Mozambique felt alive with activity.

We quickly slipped back into that familiar routine of early morning and late afternoon game drives, with naps, reading and card games spaced out in between. Hikes up the countless inselbergs were by far our most treasured activity, in spite of the all too frequent signs of recent lion activity. From the peak of one of the granite rock outcroppings, the vastness of the region was overwhelming – and addictive.

Niassa, like the Quirimbas, is hardly a destination for those seeking vibrant wildlife sightings and a ‘Big Five’ experience. However, for those among us who find solace in the solitude and freedom that comes from a place that remains as wild, these two areas in Mozambique are not to be overlooked. With fuel, food, a tent, a GPS and a sense of adventure, they are explored easily using Pemba as a base.