Rumors swirl around the shores of southern Africa — about the intensity, remoteness and captivating beauty of Mozambique’s northernmost coastline.

Quietly existing independent of the broader country, the coastal province of Cabo Delgado could nearly be described as forgotten until just recently. Located 2,500 kilometers north of the capital, the area is both difficult and costly to access. That said, this sleeping region was starkly awoken in 2012 with the offshore discovery of natural gas. 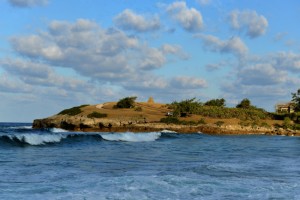 On hearing that this pristine wilderness was about to embark on a path of rapid industrialization, I set off with a boyfriend and a puppy to explore all that may not remain for long. Unsure of what we might find – but ever excited by the prospect of a wild adventure – we began a multi-day drive. Landscapes, architecture, culture and roadside produce subtly transformed as we dodged potholes and manic construction vehicles on the EN1. We breezed through Tofo and Vilankulo, slowing for a military escort before carrying on past Nampula and Ilha de Moçambique. We were anxious to reach the rumored ‘best part’.

Though crossing the boundary into Cabo Delgado was entirely uneventful, a relative spectacle of commercial development greeted us as we drove into the city of Pemba. Formerly a sleepy beachside town, Pemba has rapidly transformed into the central hub for the emerging natural gas industry. Commercial parks grow seemingly like weeds, while supporting casinos, restaurants, luxury hotels and expat complexes crop up around them. A newfound energy consumes the city, spawned on by the promise and potential held by an explosive industry.

While the humanitarian in me fears the inequality and corruption that almost inevitably stems from this style of rapid industrial development, as a traveler it became a hugely convenient base for organizing adventures. Imported cheese, meat, red wine, and the occasional piece of technical or automotive gear can all be purchased here – albeit for a hefty price. Pemba Dive and Bush Camp is located just far enough outside of the city center on the edge of the Pemba Bay to make for a perfect sanctuary from the chaos. 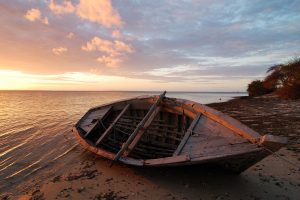 Our hearts however were not captured by Pemba and we quickly pushed onwards to the North’s most popular destination: Ibo Island. Located in the southernmost portion of the allegedly uninhabited Quirimbas Archipelago, the island itself was rumored to be somewhat like Zanzibar, before it was Zanzibar. Sheer luck timed our arrival at the car park with the departure of the day’s final boat to the island. Cruising along in a positively stuffed motorized dhow, we weaved through mangrove-fringed islands as the sun set behind us over the continent. In spite of a cramping leg and a fidgety puppy, the magic of the north finally felt real.

The oldest resident of Ibo Island, Joao Baptista, will quickly tell you upon arrival that Ibo is an informal acronym for “ilha bem organizado” – a well-organized island. Immediately upon checking into Baobibo, a menu of activities was presented. Given that our visit coincided with a full moon, the extremely low spring tides made it possible to slosh through the mangroves and across a lunar looking landscape to the southern island of Quirimbas for lunch, before sailing back on a dhow. Stopping frequently to examine hermit crabs and delicate seashells, we would follow a trail connecting the islands carved out over generations.

That said, my personal favorite activity on Ibo will always be the food. Mozambique has a decidedly bleak culinary scene once you step beyond the fresh bread and peri peri vendors. Ibo however, is a welcome surprise. Reservations and three course meals are the norm at the island’s six or seven restaurants. Thick and juicy homemade burgers at Cinco Portas made my Canadian heart sing, and I will never forget the coconut ginger lobster served at Stefane’s Africa Pot. Top it off with a crisp caparinha and some fresh calamari and you too will begin to organize your day around meals. 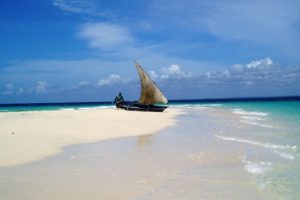 While Ibo is a vacationer’s delight, it remains a far cry from the remote and uninhibited tropical paradise for which we searched. As such, we set off with a hired dhow to explore the islands further afield. Heading north, we paused frequently to swim with resident dolphins, to picnic on a sandbank and to snorkel round a shipwreck before finally reaching the tiny island of Rolas. In following with a theme I noticed throughout my time in Mozambique, this place that was formally uninhabited did of course have a few local residents living alongside a lone coconut crab.

Fishermen from the continent are gradually moving out to the islands, having depleted marine populations closer to shore. However he island was spectacular, nonetheless. It had all the elements of that coveted tropical paradise: white sand beaches, shifting aquamarine, cobalt and turquoise waters, and the largest and most delicate seashells I have ever seen. Grilled fresh fish and a few sacredly transported lukewarm beers under an impossibly starry night sky swept me up in the sheer magic of it all. 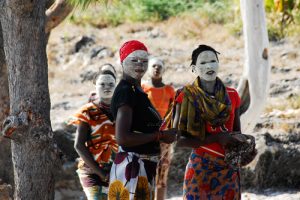 Limited supplies had us push onwards. The final destination worth visiting in the area is the tiny Swahili fishing village of Pangane. A short sail away from Rolas – and a 3-hour drive from Pemba – the local village chief has protected a small piece of palm-fringed beach for self-catering campers. Local culture is forever present during a stay here, given that the campsite is located beside the madrassa and on route to a favorite swimming hole. Children and adults peer on curiously throughout the day, observing the peculiar habits of foreigners. Of course, their culture and habits were equally as intriguing to me. The Makonde, Makua and Swahili influences stand in marked contrast to the tribes and practices of Mozambicans more broadly. In this northern region, you are culturally far more connected to Tanzania than you are to Maputo. But then again, what ultimately dictates the ebb and flow of village life are the tides and the daily catches. I never did think I would grow tired of freshly caught and grilled lobster…

Having later driven up the coast to the Tanzanian border, Pangane seems to be one of the few coastal paradises not swept up in the mayhem of the gas industry. The formerly quiet towns of Palma and Moçimboa do Praia now vibrate with the intensity of the discovery. Their beaches have suffered as a result. I fear that in years to come, the only areas to survive the rapid industrialization will be the exclusive and elite lodges that occupy private islands in the northern Quirimbas. Time however, will tell.

For now – it is well worth a visit. There is, quite simply, no place like it on the eastern coast of Africa. Believe me, I’ve checked.