Bwindi is regarded as one of the richest ecosystems in Africa and its inhabitants, the mountain gorillas, attract hundreds of tourists every year to Uganda. But what does gorilla tourism mean for one of Africa’s fastest-growing tourist destinations?

In the Ugandan dialect of Lukiga, “bwindi” means “dark place.”

A “dark place” could not be more apt to describe Bwindi Impenetrable Forest as you veer off the well-trodden path and start heading up into the thicket of jungle, digging your walking stick into the rich soil and carpeted layers of jungle growth.

Situated in Southwestern Uganda, the park curves along the boundary of the Albertine Rift Valley and Virunga National Park in the Democratic Republic of the Congo.

Designated a World Heritage site by UNESCO, the 350km2 park is home to a family of highland gorillas called Bitukura, one of three families habituated in 2009. Making their homes in the steep ridges and valleys, these 300 gorillas are part of a worldwide population of only 700.

Gorillas can cast quite a spell on you. They seem so amicable, genteel and toy-like that it can be very easy to forget the sheer power behind one hand swipe from a grown male or female.  A male gorilla can lift more than a ton of weight, enough to dispatch you very easily — a fact I was suddenly reminded of as we started the trek back. In the thickets ahead a gorilla made a rush at a porter, who with a bit of air stick waving and standing his ground managed to avoid any direct conflict. These animals may be habituated, but they are still wild. This fact doesn’t stop hundreds of tourists flocking to Uganda every year to spend their allotted one hour with these incredible primates. 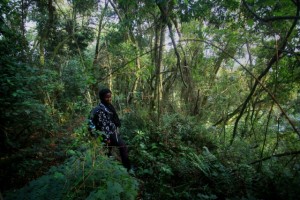 Mary, one of only three women guides in Bwindi Impenetrable forest. (Photo by Linda Markovina)

Gorilla trekking is often put on those lists of “things you need to do before you die,” but the act of trekking has a 100-year long history. People have been venturing into the forests of Central Africa since as early as 1902 to study or catch sight of Gorilla gorilla beringei.

It was only much later, after the independence of Belgian Congo in 1973, that the Rwanda Office of Tourism and National Park Development was created and the laws around national parks and hunting of wildlife began to take shape. The first tour for non-residents of Uganda to visit the mountain gorillas was created in 1979, but at that point not enough was understood about the way humans and gorillas should interact. Eventually in the same year “gorilla rules” and The Mountain Gorilla Project were established, both to help introduce gorilla tourism and education combined with anti-poaching efforts to achieve better gorilla conservation.

Uganda has seen a massive influx of tourists since 1993 to the place where the oldest gorilla family of Mubare was habituated. Basic studies of the mountain gorillas were undertaken in 1959, but it was not until the plight of the gorillas was made famous by Dr. Dian Fossey that gorilla tourism really began to take off in the imaginations of foreigners seeking safaris in Africa. Fossey, an American who lived among the gorillas from 1963 until her death in 1985, made the gorillas and herself famous thanks to her book and subsequent movie, “Gorillas In The Mist.”

Uganda was listed by Lonely Planet as one of the best tourist destinations of 2013. It has recorded the highest tourism growth on the African continent in 2012 with over 1.2 million visitors in 2013 and no sign of slowing down. President, Yoweri Museveni has often said tourism will be the driving force to pull Uganda out of poverty.

Although a perception of anti-gay legislation will affect tourism to a degree, the allure of trekking with gorillas might still keep a steady flow of tourists coming in. The country recently started dropping the price of gorilla permits in low season, in order to boost the profile of their No. 1 tourist attraction. Today Uganda is a relatively peaceful country, but there has been a legacy of war, maladministration and political unrest in the country, and its immediate neighbors face some serious challenges to conservation efforts. 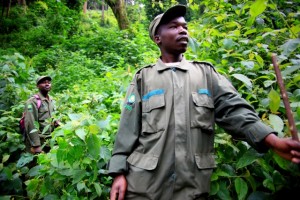 Local Guides helping you trek through the jungle to locate a family of gorillas. (Photo by Linda Markovina)

Someone with an untrained eye would really only spot these primates when they were pretty much within breathing distance — such is the heavy density of the Highlands forest. They never move more than a couple of miles from their nightly resting beds. Per park rules, you are only allotted one hour per day to spend with the gorillas. This is because even though some of the groups are habituated, they still need to be left alone to go about their daily business with minimal interference from tourists.

Gorillas are incredibly closely related to us, sharing 98.4 percent of our genetic makeup, and we run the risk of transmitting human diseases to them. Uganda is one of the most densely populated countries on Earth, with Bwindi Park being surrounded by nearly 200-400 rural people per square kilometer, putting gorillas and humans virtually on each other’s doorsteps. Mountain gorillas are facing habitat loss because of people trying to eke out a living through farming. A huge challenge that a few environmental groups in Uganda are working on is to find different ways to allow people to met their basic daily needs without competing with gorillas for the limited resources available.

In Uganda, gorilla tourism contributes more than 50 percent of total tourism revenue, so it’s important for people and gorillas to find a way to co-exist — for the benefit of both.  A whole host of opportunities exist around gorilla trekking for local Ugandans to benefit, including hiring local guides as porters, craftsmen, and support jobs in transport, accommodation and food service. In order to protect this endangered species it is important to understand the economic befit that the gorillas have for the local communities and to support the ones that allow gorillas and locals to exist harmoniously.

The gorillas are a major attraction, but they are just one part of an ecosystem that makes up the landscape of Uganda, politically, environmentally, socially and culturally. Gorilla populations today have been slowly stabilized, and even though they still are at risk, tourists to the country should take the time to use responsible tour operators and support meaningful community based projects that have tangible long term value to both the local people and gorilla conservation. Travel should be something that should improve rather than exploit a destination, and when it comes to the magnificent natural beauty of Uganda’s highland gorillas, as travelers we have the ability to help in this regard.

When and how to see gorillas in Uganda