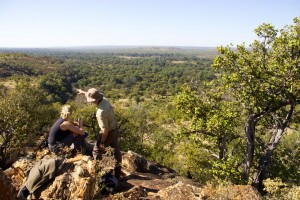 A game ranger once told me: If you were to take all the roads in the Kruger National Park and add visibility of 20 meters on each side, you would still only experience a small percentage of the park.

The Kruger is one of the most accessible parks for an African safari, but its accessibility can be a double-edged sword. The park is popular with both local and international tourists, and during peak holiday season it can turn into a proper mosh pit, as cars and safari vehicles jostle for the best view of a game sighting. If you aren’t staying in a private concession, the park can lose its allure of true wilderness.

The public rest camps do offer value for money, but they are surrounded by electric fences to keep the animals out. In the end, you feel a bit detached from the African bush. After recently hiking the Pafuri Walking Trail, in the Makuleke Concession in the more remote northern part of the Kruger, I’ve come to the conclusion that the Kruger is best explored on foot.

The Pafuri Walking Trail’s guide, Steve Faulconbridge, already has ambitious plans for our group on the first day: sundowners on Mangala Hill. We huff and puff and clamber over rocky terrain to catch the sunset. “Don’t look back, you’ll only ruin it for yourselves!”Steve shouts after us. “Wait until you get to the top.”After catching my breath, I turn around and take a first look over the terrain we will be exploring for the next few days. 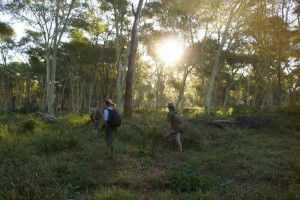 At the bottom, the Luvuvhu river winds through riverine forest of jackal and njalaberry trees. The sun is setting over the hills, casting a warm glow over the landscape. We hear rustling in the distance; a herd of buffalo is slowly advancing towards the river. It smells like dusk in the African bush, red dust and potato bush, with a hint of crushed grass.

Don’t expect long, languid lie-ins at Pafuri Walking Trail Camp, run by Wilderness Safaris. The wake-up call is at 5:30 a.m., even before the birds start chattering their dawn call. I reluctantly tear myself from my warm feather duvet, unzip my tent and breathe in the crisp winter morning. There is only time to wash the sleep from my eyes, brush my teeth and have a quick cup of coffee before we hit the road, just before sunrise.

“The No. 1 rule of walking in the bush is you do not run when an animal charges at you. When you break into a sprint, you sign your own death certificate,” Steve lectures. Half an hour later I realize just how vulnerable we are, despite the guides carrying rifles. A macabre cartoon from Gary Larson’s Far Side pops into my head: Two crocodiles are lying next to each other, with a pith helmet and a safari suit strewn over the river banks.

“That was incredible,”the one crocodile says to the other. “No fur, claws, horns, antlers or nothin’… Just soft and pink.” Suddenly I’m painfully aware just how soft and pink I am. Then we aren’t even talking about my lack of sight, smell or speed.

However, the bush has its own way of warning you and an experienced ranger and tracker will know how to interpret these danger signs. A group of chirping red billed ox peckers are an indication that buffaloes are nearby. Then it’s better to stay away from the thick foliage and rather take a longer detour through the open savanna.

We are exploring an old Africa. The rocks under our feet date back more than 250 million years. The Pafuri region and the Makuleke concession, in which the walking trail operates, was once home to the Thulamela civilisation. The Thulamela people are the descendants of Great Zimbabwe and Mapungubwe, both powerful African kingdoms. Archaeologists have uncovered shards of Chinese pottery and Arabian artifacts, proof that the Thulamela people were trading with the Portuguese sailors who were exploring the coast of Africa. 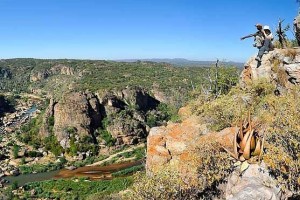 The view from Lanner Gorge (Photo courtesy of Wilderness Safaris)

We hike through narrow gorges in the footsteps of the old ivory hunters and smugglers, before we climb out on another kopje, this time for a coffee break. The view before us looks like something out of explorer and artist Thomas Baine’s paintings: Rolling hills covered with ancient baobab trees. I seek out a rock, warmed by the sun, with a cup of coffee and a rusk in hand. A cuppa joe never tasted this good before.

For our afternoon excursion, Steve has even something better to show us than the baobab-covered hills. There is a fever tree forest several kilometers long nearby, where some of the finest specimens of these trees grow. We arrive just before dusk during the Golden Hour, that magical sliver of time that photographers are forever chasing.

The Golden Hour in a fever tree forest is really golden. The soft light shimmers off the green-gold trunks of the trees, creating an alchemical atmosphere which transforms it into a fairytale land. A lone elephant bull is feeding nearby and Steve suggests that we try to follow him on foot. We group into a single file and tiptoe after the bull while it continues to forage, seemingly without a care in the world. After a while it seems like he has grown tired of his new entourage, swings around and gives us one haughty elephantine look. We freeze and hold our breath. Even the birds have gone quiet. Then he turns around and saunters away, happy that he showed us who is boss in the forest.

The next morning we head towards the banks of writer Rudyard Kipling’s “great gray-green, greasy Limpopo.” The trail winds through swampland and riverine forest, with Ilala palms towering over the bush. Suddenly Steve stops at a little puddle that has a sharp but faintly familiar smell. There are big cat tracks in the dust. Leopard, he confirms. The puddle is the cat’s urine that he used to mark his territory. And there, deep in the African bush I get to experience a Ripley’s Believe-it-or-not moment as I suddenly recognize the smell: Leopard pee smells like cheese Doritos.

Need to know before you go