In 2007, the meteoric rise of a then relatively unknown Senator from the United States became a global phenomenon. Gunning for the presidency and going by the catchy slogan “Yes We Can”, Barack Obama soon became an icon of collective hope and progressiveness.

Everyone around the world wanted a piece of Barack Obama, including Kenyans, many of whom claimed him as “our son in the US.” This was by virtue of Barack’s father, Barack Obama Sr., having his ancestral roots in Kogelo village in the western part of Kenya.

A year before this buzz, very few Kenyans could point out Kogelo village on a map. It remained relatively unknown, even in 2006 when then-Senator Barack Obama made a pilgrimage to visit his grandmother in the desolate township. It was not until he secured a victory in the US presidential elections that the wheels started spinning faster. 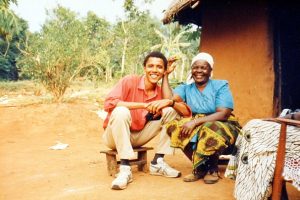 Barack Obama with Sarah Obama in Kogelo (Courtesy of US Embassy, Jakarta)

This town without electricity, no proper access by road and poor infrastructure was soon an attraction for visitors. The Kenyan government began making improvements in security, health clinics and roads in the area. Today it is a thriving town with a lot to offer. Today, Kogelo is a vibrant town that acts as a trade center and most significantly, as a tourism destination.

To reach Kogelo, you first need to get to Kisumu. Kisumu can be accessed by road (about five hours’ drive) or by air from Nairobi. From Kisumu City, the road to Kogelo is a 25 mile (40-kilometer) ride to the west.

To get there, you take the Kisumu–Siaya road and branch off at Ng’iya junction. On your way there, you may want to stop for a photo session at the Equator Line. The equator is the imaginary geographic line that cuts the earth into two hemispheres. One of its marked points is located near Ng’iya Market on the way to Kogelo.

At the Obama homestead, you will see the hut by which Obama took the famous photo of him holding a sack full of potatoes standing next to his grandmother, long before he became a household name.

Visitors often sit down with Mama Sarah Obama – the widow of Obama’s grandfather – beneath a mango tree in her homestead for an interview. Mama Sarah has been involved for a long time in community initiatives that target orphans, and the limelight that her grandson brought shed more focus on her noble activities.

Other places to see are the Senator Barack Obama Secondary School, which is named after the US president, and the Kogelo dispensary, where Obama very publicly took a HIV test in an effort to reduce the stigma associated with HIV and AIDS.

A traveler seeking to make a trip to Kogelo will not only experience the beauty of this “pilgrimage,” but also be exposed to a number of other intriguing attractions. For example if you decide to go by road to Kisumu, you will experience the scenic rift valley as you go down. The half-day trip will lead you to Kisumu.

At the shores of Lake Victoria (the world’s second largest freshwater lake) there is the Kiboko Bay Resort. Here you get to view the lake in its shimmering splendor. You get to enjoy your dinner in the presence of hippos in the marshy swamps nearby.

Many tour operators offer six-day packages that involve a trip to Kogelo, a safari to the famous Maasai Mara, a trip to the Flamingo Park in the Rift Valley, and back to Nairobi in one circuit.