The colors and designs of any nation’s flag are never randomly chosen. They represent the triumphs and tribulations of history, the blood spilled for independence, the richness of a country’s agriculture, and its cultural heritage. In honor of national flag month (in the USA), here is part four of our slideshow series, which looks at the 12 flags of central Africa and how each one conveys the story of the country’s nationhood. 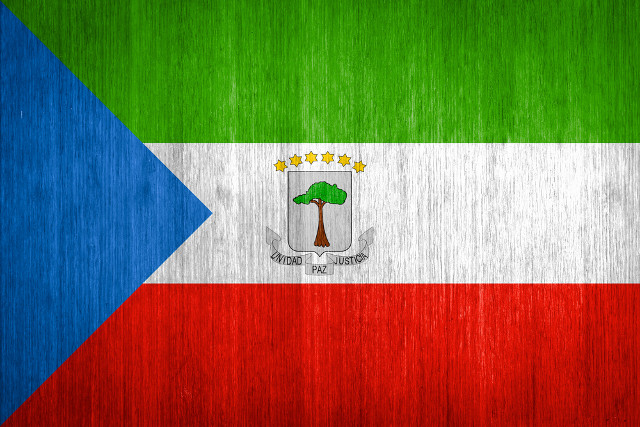 This tiny country on the Atlantic coast was formerly known by its colonial name, Spanish Guinea. On Oct. 12, 1968, the Republic of Equatorial Guinea gained independence, and raised its first flag the same day. The coat of arms featured on today’s flag (above) is a silk-cotton tree, symbolizing the spot where Spain and a local ruler signed the first treaty. This was included in the original flag, but the stripes have changed. Green represents agriculture and jungles of the country, red is blood shed by the liberation fighters, blue is the sea, and white is peace. The badge was replaced when President Francisco Nguema took power in 1973, but when  he was deposed in 1979, the silk-cotton tree seal was re-instated, along with a silver shield and a ring of six-pointed yellow stars representing the Rio Muni. The scroll beneath the shield reads “Unidad, Paz, Justicia” — unity, peace, justice. 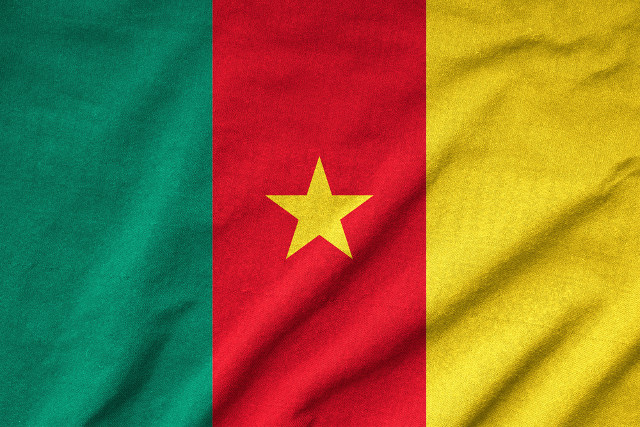 Cameroon became a unitary state on May 20, 1975, and adopted the national flag above. Discussions of independence from the French went back decades before it was achieved, as did the debate over the flag. A shrimp was suggested as a symbol for the flag because the word Cameroon is derived from the Portuguese word, camarões, meaning shrimp. Cameroon became the second country in Africa to adopt the pan-African colors — green, red and yellow. The yellow star is a symbol of national unity. The struggle for African self-determination after World War II is embodied in the three colors of this flag and other countries reflecting the same sentiment. 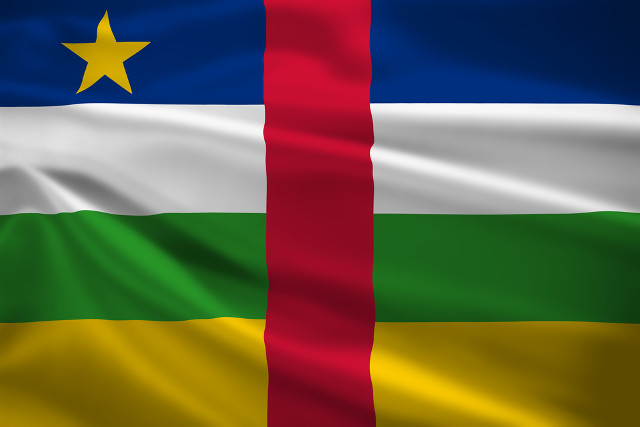 Barthélemy Boganda was the first prime minister of the autonomous territory Oubangui-Chari, formerly the French Congo colony, and subsequently renamed  Central African Republic in 1958. Boganda had the idea that Africa and France should always co-exist, therefore he ordered the new flag to be a near-perfect blend of the French tricolour and the pan-African colors with the vertical red stripe marrying together the two nations. When the Central African Republic was officially independent on Dec. 1, 1958, it raised the flag, and despite turbulent times that followed, the flag hasn’t changed. When Emperor Jean-Bedel Bokassa made the C.A.R. an empire from 1976 to 1979, an imperial flag was raised for him, but the original banner has remained unchanged until today. 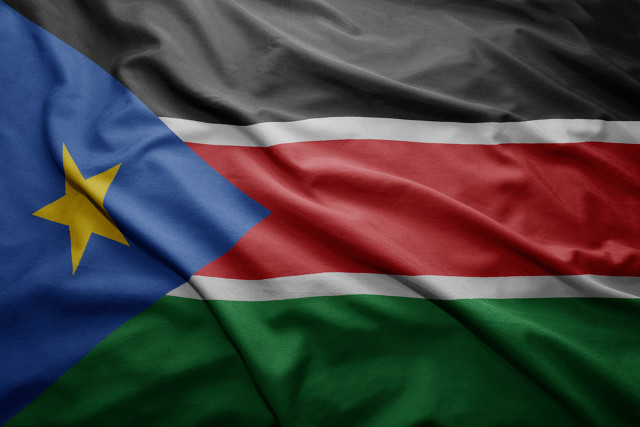 Most nations have not endured the pain and carnage that South Sudan has. After the bloody Second Sudanese War, the southern part of Sudan (mostly Christians and animists) fought the northern, predominately Muslim population for independence. The peace treaty and referendum for independence was signed in Jan. 2011, and the official South Sudanese flag was hoisted over the world’s newest country. The design was used during battles in the 1990s to represent the Sudan People’s Liberation. The six colors represent the South Sudanese people (black), peace and harmony (white), bloodshed for liberation (red), Islam and maturation (green), the Nile River (blue), and the yellow Star of Bethlehem for the unity of the separate South Sudanese states. 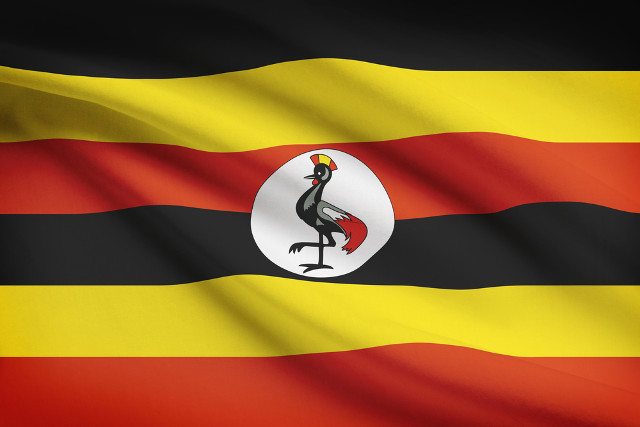 When the Republic of Uganda became free from British rule on Oct. 9, 1962, it raised its flag. The British had used the gray crowned crane against the typical blue ensign. Ugandan soldiers used the bird on their badges during colonial rule. The grey crowned crane is fabled for its gentle nature. Uganda’s national symbol, a gray crowned crane, is now the centerpiece for the nation’s banner. The dominant political party, the Uganda People’s Congress, validated the use of the party’s tricolors repeated with six stripes. Black represents the African people, red, the connectivity of blood between every African (brotherhood), and yellow, sunshine. 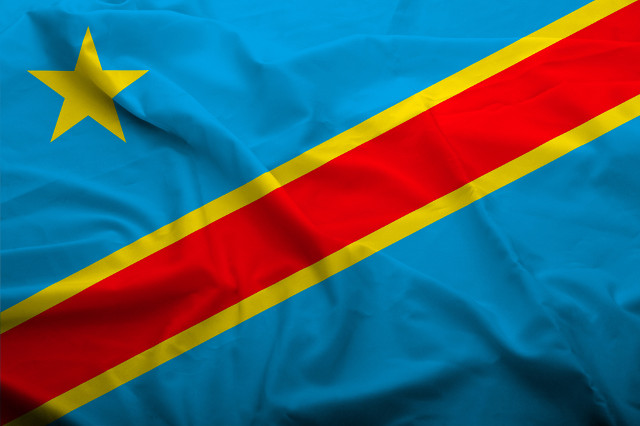 Arguably the epicenter of the scramble for Africa, the Democratic Republic of Congo went through multiple changes politically and flag-wise. It has had six different flags since gaining independence from Belgium in 1960. The banner’s theme and colors have stayed relatively the same since being raised by the first Prime Minister Patrice Lumumba. President Mobuto Sese Seko renamed the country Zaire and integrated a green national flag, but he and his flag were overthrown during the First Congo War in 1997. Under the leadership of Laurent Kabila, a former flag was restored, and the country’s name changed to D.R.C. Finally, Kabila’s son Joseph became president in 2001, and declared the Third Republic, re-instating the 1963-to-1966 national flag, except with a lighter shade of blue that you see here. 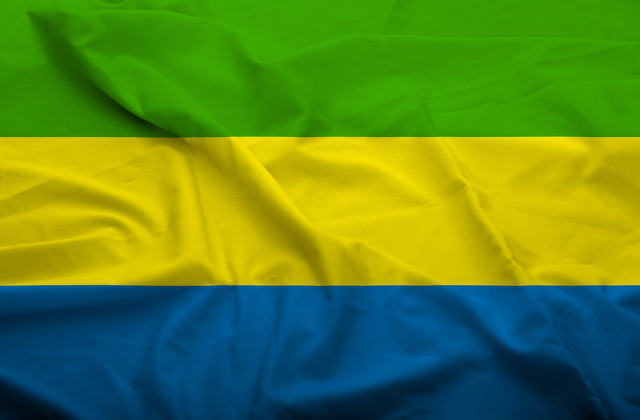 Formerly one of the four territories of French Equatorial Africa, Gabon became an autonomous country in 1958. France did not normally allow flags to be made prior to independence, fearing it would incite nationalism. Gabon went ahead anyway, choosing a unique ensign for its transitioning territory. Many former French colonies were inspired by the pan-African flag, making their new nations’ banners with similar three-colored, identically-sized vertical stripes. Gabon’s flag, when first hoisted in 1959, had three stripes — the central yellow stripe narrower than the other two — and the French canton in the upper hoist corner, making it one of the only almost-new African nations to achieve autonomy and allude to a link with its colonizers. After August 1960, Gabon dropped the French flag and made the stripes equal sizes. Gabon is on the Equator, and the yellow stripe embodies this. The blue stripe represents the Atlantic coast and the green is for the lush forestry. 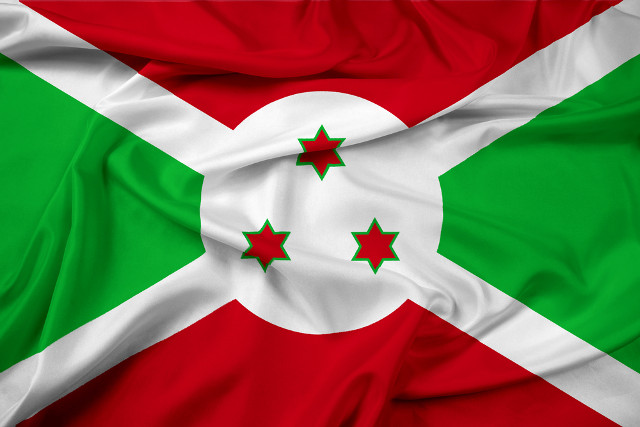 Formerly joined with Rwanda as part of the Belgian colonial empire (named Ruanda-Urundi), the Kingdom of Burundi achieved independence on July 1, 1962, and joined the U.N. shortly thereafter. The first flag featured the traditional symbol of a drum, or kayenda, and a sorghum plant (the main agricultural product of the country) which appeared at the center of the white disk. The monarchy was overthrown in 1966, and the flag was modified. The kayenda and sorghum plant were removed, and three red stars with green outlines were put in the disk’s center in 1967, representing “unity, work, progress” (the national motto), and the Tutsi, Hutu, and Twa — the country’s three main ethnic groups. 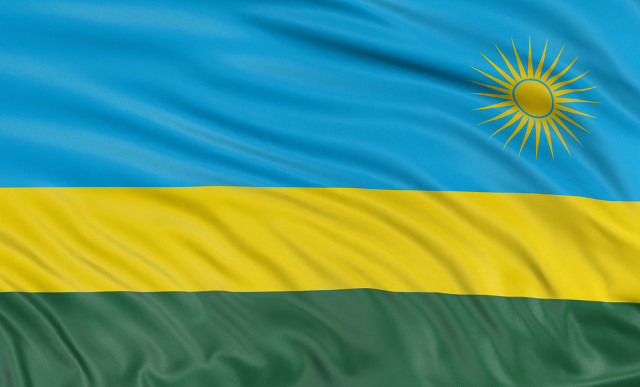 Rwanda was declared a republic before achieving independence on Jan. 28, 1961, and a pan-African, vertically-striped tricolor flag of red, yellow and green was hoisted. Later that year, a large black “R” was put in the middle of the banner to differentiate it from Guinea’s flag. When Rwanda officially broke free from Belgium on July 1, 1962, the flag remained. It stayed up through the 1994 genocide and even after the Tutsi army overthrew the Hutu government. To avoid the flag being associated with the overwhelming tragedy of 1994 (it represented Hutu extremism for many), a new design was hoisted on Dec. 31, 2001. The large blue band represents peace and happiness over all, the smaller yellow band is for economic development, green is the hope of prosperity, and the sun represents enlightenment. 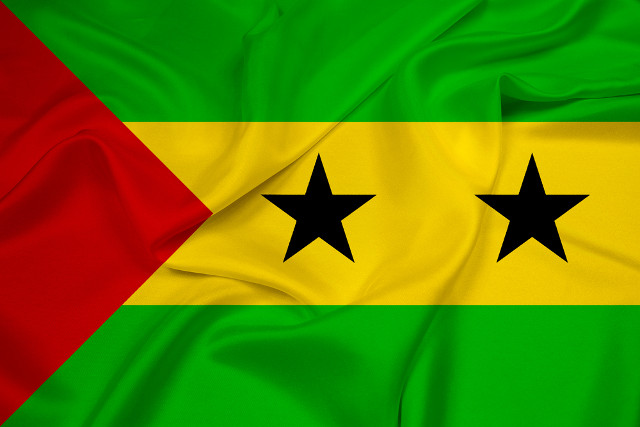 This island nation was formerly colonized by Portugal, which would not let loose its occupation until a military coup in Lisbon (Portugal’s Carnation Revolution) took place in 1974. Manuel Pinto de Costa was the leader of the liberation group Movement for the Liberation of São Tomé and Principe in the 1960s and 1970s. Costa is credited with designing the flag of São Tomé and Principe, raised on the day of independence, July 12, 1975. This flag embodies the tropical sun through the yellow band, the lush vegetation through the green, the fight for independence in the red, and the two islands which make up the country through the two black stars. 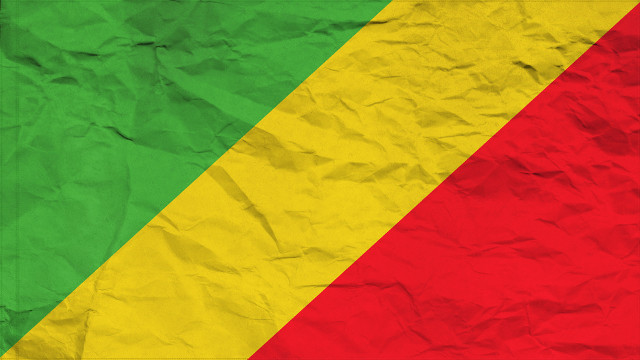 Republic of the Congo

Formerly the French Congo, then renamed the Middle Congo, this country north of the Congo River was a colonial territory of France from roughly 1880 to 1960. As with most territories in Africa, the occupiers worried that a national flag would incite opposition to foreign rule, and forbade Congolese from flying a flag. Limited autonomy was granted to the Congo in 1958, and on Sept. 15, 1959, a flag chosen by the Legislative Assembly to fly next to the French tricolour (blue, white and red). It remained hoisted when independence was achieved on Aug. 15, 1960. From 1968 to 1991, the flag was replaced under the Marxist People’s Republic of the Congo regime which overthrew the previous government. After the U.S.S.R. fell, the Republic of the Congo was reinstated, as was the 1959 flag. Multiple online sources say the symbolism of the red is explained, but could be associated with the struggle for independence. The green is for agriculture, and the yellow, for the friendship and nobility of the Congolese people. 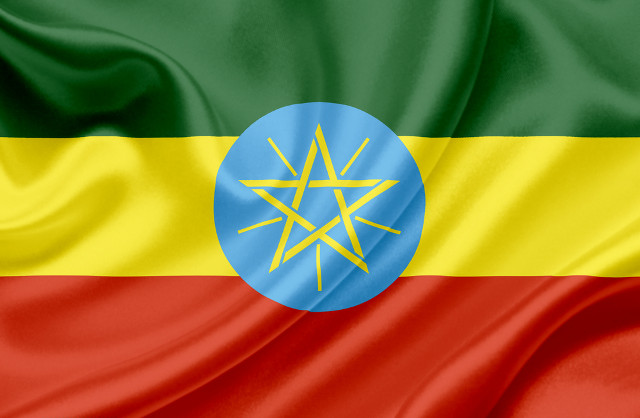 Call her the grandmother of all African flags. Ethiopia’s struggle to remain an independent nation is an inspiration for the world. Except for a brief occupation by Italy from 1936 to 1941, Ethiopia remained uncolonized during the scramble for Africa. The three Pan-African colors that many other African nations used upon independence were first employed by Emperor Menilek II back in 1897. The colors celebrated victory and survival — the year before, the kingdom had staved off Italy from colonizing it. The Lion of Judah, a biblical reference, was used as the center emblem until the government was overthrown in 1974 by the People’s Democratic Republic of Ethiopia. After this Marxist regime was deposed in 1991, the colors green, yellow and red were reinstated. When the Federal Democratic Republic of Ethiopia adopted its constitution in 1996, the blue disk and yellow star were added. These represent Ethiopia’s bright promise and future.