I love road tripping down Route 62. Promoted as the longest wine route in the world, and encompassing both the Breede River Valley and Little (Klein) Karoo further east, Route 62 can be travelled as a hinterland alternative to the N2 getting to the Garden Route, and remains worlds apart when it comes to traffic. Along the way the road takes you up breathtaking mountain passes and down into intensively cultivated valleys; it meanders through perfectly preserved 18th century Cape Dutch architecture, and past huge tracts of gold-meets-green grasslands dotted with ostriches under a deep blue sky. 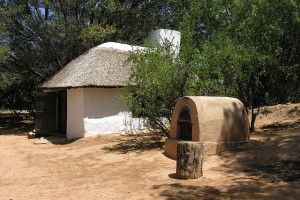 Leaving Cape Town you’ll follow the N1 towards Paarl and continue on this highway through the Huguenot Tunnel (you’ll pay a toll here) and into the gorgeous Breede River Valley before linking up with Route 62 (R62 also called R60) in the farming service center town of Worcester, about an hour into the drive. Pause at the Kleinplasie Living Open Air Museum. Telling the region’s agricultural history through living history exhibits; it’s one of the best of its kind. The museum shop is my favorite part of a visit: here you can sample and buy various flavours of the 60-proof witblits (white lightning), a traditional Boer spirit distilled from fruit. To get the full taste, first inhale then sip and roll the liquor around your mouth before swallowing and exhaling.

With more than 50 trademarks for sale, brandy could be considered South Africa’s national spirit. Distilled from only grapes and left to mature in French oak barrels for at least three years, the 330-year-old South African brandy industry has a reputation for producing outstanding batches of the alcoholic sweet nectar. And brandy tasting is as popular as wine along Route 62, home to multiple brandy specific cellars. First up, in Worcester, is KWV House of Brandy, the largest cellar of its kind in the world with around 120 copper pots under one roof.

Robertson should be your next R62 stop. At the centre for one of the largest wine-growing areas in the country, it is also is famous for its stud horses and the Klipdrift Distillery. One of South Africa’s most popular rail brandy brands, you’ll see it on the shelf at most pubs. You can do a tasting and tour of the distillery here. 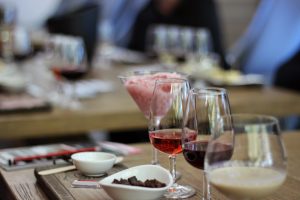 Back to another favorite form of grape fermentation… my top vineyard pick of the Robertson bunch (there are more than 30 around the town) is Van Loveren. Tastings take place in the garden surrounded by trees planted for historical events – good and bad – like the day Mandela was released from prison or the day the Japanese bombed Pearl Harbor. Besides spectacular grounds this place has a different take on tastings. You’ll pick what wines you want to try be brought the entire bottle. You can choose as many bottles, and pour as much as you’d like. The bottles will stay at your table until you tell someone to take them away – so theoretically you can spend the day drinking for free in the garden. The product is not bad either. Van Loveren is 15 kilometers from Robertson on the road to Bonnievale.

East of Robertson, the scenery changes as the road climbs Kogmanskloof Pass, leaving the Breede River Valley and entering the Little Karoo. Atmospheric Montagu is the first town up the pass, and a good place to spend the night. 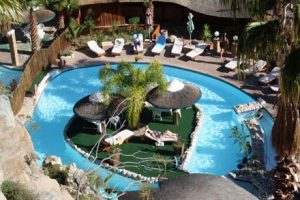 Founded in 1851, today the immaculate whitewashed Cape Dutch homes on its main street are now home to artists and other escapees. At the Avalon Springs Hotel, where you should book a room for the night, about 3 kilometers from town, the hot mineral spring pools are known for their healing properties. They can be reached two ways – drive up and park in the lot, or hike in via the easy 2.2km Lover’s Lane Trail, which starts at the car park at the end of Barry St.

It’s about a 2 hour and 45 minute drive from Montagu to the next town of any note on Route 62. Tiny Calitzdorp is home to five wineries, but De Krans (follow the signs from R62) is considered the best and offers cellar tours. If you’d rather just grab a light meal, head to the café at Die Dorpshuis (a guesthouse), which is across from Calitzdorp’s Dutch Reformed Church at 4 Van Riebeck St. It does traditional South African country meals.

End your Route 62 road-trip in the ostrich capital of South Africa, Oudtshoorn. The sedate tourist capital of the Little Karoo, Oudtshoorn actually bills itself as the “ostrich capital of the world” and this label is not without merit. The surrounding farmlands have bred ostriches since the 1870s, and at the turn of the 20th century, when ostrich feathers were the fashion statement du jour, fortunes were made. Known as “feather barons,” ostrich farmers built the grand homes that still line the main street of Oudtshoorn today, giving it a nostalgic charm. And although ostrich feathers have not been in vogue for decades now, the farmers still make money from breeding the birds for meat and leather. Tourists can also get in on the ostrich madness by visiting a show farm like Safari Ostrich Show Farm, where you can even take a ride on one of the birds.