The Northern Cape’s Green Kalahari, located on the banks of the deep blue Orange River, is a cool place to get lost for two days. It’s home to South Africa’s fastest growing wine region, which now produces some 10% of the country’s grapes. It’s also home the Northern Cape’s sixth tallest waterfall, Augrabies Falls, that thunders over a landscape resembling old photos of the moon. Here’s a 48-hour itinerary that makes the most of the what the Green Kalahari has to offer. 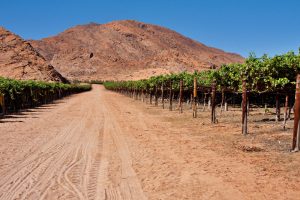 We’ll start with wine, but to reach the wine we must first examine the water. Beginning in the craggy mountains of Lesotho, the Orange River is the region’s lifeblood. It heads west for more than 2,200-kilometers before emptying into the cold, dark waters of the Atlantic Ocean on the South African border with Namibia. But this source of hydrogen-and-oxygen molecules cuts an emerald path through the Northern Cape in South Africa’s orange landscape, turning the Kalahari sand into a fertile green ground on its banks. It’s what gives the area the Green Kalahari moniker and creates an ideal climate for growing wine grapes.

The fist vineyards in the Green Kalahari (which is centered around the towns of Keimos and Kakamas today), began in the early 1900s with the objective of producing raisins. The entrance into the wine making game was accidental, and didn’t come until the 1960s, when it was discovered the sultana grapes tasted much better pressed and fermented into wine, rather than eaten as raisins. Shortly after, the Orange River Wine Cellar Cooperative was born in 1965. The first wine grapes were harvested in Upington in 1968, and since then the co-op has grown to be the largest in South Africa, with about 750 members and five cellars concentrated along the N10 and N14. The cellars produce about 30 different products, including grape juice concentrates. Most of all the region is known for its delicious desert wines, and I love especially the earthy Jerepigo, which has a taste of pineapple and plum to it, or the sweet Muscadel that features earthy fruity undertones – think peach and apricot.

Spend the night in Kakamas, at the three-star Kalahari Gateway Hotel. It has oversized rooms with coffee tables and couches. Grab dinner at the zebra-themed restaurant and bar inside the hotel. It serves an assortment of steak and seafood dishes plus pasta, burgers and pizza.