Other than an acacia tree and a sunset backdrop, the most common icon of Africa is a Maasai warrior. We’ve all seen the images of tall and slender men, partially draped in distinctive red shawls, standing stork-like on one leg and leaning on a spear shaft.

The Maasai women stretch their earlobes fashioned by heavy earrings, wear short hair and cover their bodies with beaded and copper jewelry that almost seem to choke their long necks. Each part of the elaborate beadwork has a symbolic meaning within the community. They crown all this with a paste of finely ground red ocher mixed with cow fat plastered on their hair.

Their striking and exotic appearance may give the illusion that this community is completely free of the influence of the modern world. But the Maasai are perhaps the most “marketed” ethnic community in East Africa, and lie at the heart of Kenya’s tourist culture.

The Maasai culture has been exported through its depiction in popular culture, film and music — the movie titled “The White Masai” comes to mind. Stories of tourists coming to Africa and falling in love with Maasai are now commonplace. After all, they are known to be a handsome people.

The Maasai reside mainly in the southern part of Kenya and are also found in some parts of Kenya’s neighbor to the south, Tanzania. 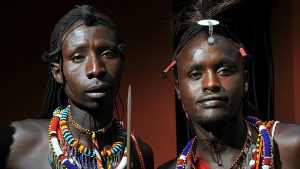 Historians traced the roots of the Maasai to Nilotic communities that resided near the Nile River and migrated southwards in search of pasture. They finally found a suitable home in Kenya’s south.

Since they are a nomadic community, they do not settle in one particular area but move from place to place in search of pasture for their cattle. As a result, they construct their temporary oblong-shaped windowless houses with branches, grass, mud and cow dung.

But with the growing “fixed” population around them, more and more Maasai are being forced to settle in specific pasture lands.

Although there have been concerted efforts by the state to make them abandon their nomadic lifestyle, Maasai customs and traditions have persisted over the years, even in the face of modernization.

“A Maasai without culture is as a zebra without stripes. If we abandon our way of life, our next step could be extinction,” said Kakuta Ole Maimai, founder and managing director of Maasai Association in a post published on the association’s website.

The Maasai are steeped in their cultural practices, which are a tourist attraction in their own right. However as they strive to hold on to their traditions, human-wildlife conflict remains a challenge.

A quote on the Maasai Association website puts the conflict into perspective:

“When a lion attacks a cow, the authorities from wildlife and conservationist organizations would bury their heads under the sand. When a Maasai warrior kills a lion because of killing his cow, the authorities would ferry security personnel to arrest the warrior. In other words, it is acceptable for a lion to kill a cow but not acceptable for a warrior to kill a lion. Lions are more important than the Maasai cows.”

The Maasai exist in a patriarchal community that believes that young men should protect women and children. These men are warriors called morans.

The Maasai culture and its very survival revolves around ownership of cattle, which are considered a symbol of wealth. Cows also play a significant ceremonial role. No Maasai feast will proceed in the absence of roasted meat drained with a cup of curdled blood.

The moran undergo training and initiation rituals into “manhood” one of which involved capturing a wild lion and delivering its carcass to the village elders. Before this, they remain boys who can only take the task of running small family errands like sending a message to the neighboring homestead.

The Maasai will go about their daily business – which mostly is that of herding cows – huddled in groups and singing traditional melodies.

On random days, usually in the evenings, the morans will gather in a circle to dance in rhythm. One by one, they will take turns stepping into the center and make successive vertical jumps high into the air with their spears at the side. The average Maasai man leaps freely up to four feet in the air.

Where To Visit With The Maasai

If you are visiting Kenya, you might encounter someone in Maasai attire at the airport. You might even have one carry your bags to your ride. But the authentic Maasai culture can only be experienced in Maasai territory.

You will have to make a trip to the Maasai Mara or any of the communities around it in the county of Narok, some 90 miles from Nairobi.

One option for the eco-conscious is Maji Moto Eco Camp in Loita Hills. It is operated by the Masai people, and all the structures in the camp were built Masai style, using only local materials such as branches, stalks, grass, cow dung and stone (no trees were felled for construction). There is no electricity in the camp, and water for showers is brought in from a nearby hot spring.