When I’m wandering through the modern metropolises that are Cape Town and Johannesburg, it is hard to fathom that places like Kgalagadi Transfrontier Park still exist in South Africa. But escape the urban jungle and head way up north to the top of the South African outback, on the border with Namibia, and into the sands of the Kalahari desert. Here you’ll find a place where crimson and pumpkin meets cerulean blue on sizzling and flat horizon, where lanky male lions with manes as dark as the moonless night sky nap under camel thorn trees and wild dogs still howl. If you haven’t been before, it’s a surreal landscape, made more so by its utter remoteness. 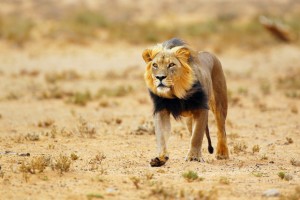 A black-maned lion in Kgalagadi (Shutterstock)

It is a solid five-hour drive from Upington to Kgalagadi Transfrontier Park’s Twee Rivieren gate, located a dusty 250 kilometers to the north – the last part on red dirt roads flanked by sand – and you won’t find a single petrol station between the two. So start with a full tank and make sure to carry plenty of water, as my little sister Jessica and I did when completing our maiden voyage to Kgalagadi.

The park was created in April 1999, the result of a merger between the Kalahari-Gemsbok National Park in South Africa and the Mabuasehube-Gemsbok National Park in Botswana. You’ll find the accessible section, covering 9,591 square kilometers, in the triangular segment of South African territory between Namibia and Botswana. The protected area continues on the Botswana side of the border (there are no fences) for a further 28,400 square kilometers, but this area is not easily accessible to tourists. It’s meant more for helping wildlife, like the antelope, who are forced to travel great distances during times of drought to reach water and food, to migrate unhindered between the countries.

Most of the animals are remarkably tolerant of cars, which allows for visitors on self-drive safaris to get extraordinarily close to the Big Five. 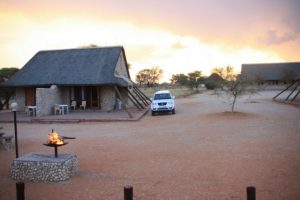 Entering the park, I was immediately struck by the hauntingly beautiful landscape. Bisected by the usually dry Nossob and Aoub Rivers running through it, the two meet just a few kilometers north of the entrance at Twee Rivieren, which is also where the park’s main camp is located, and where we would spend the night. It is also the only of the three rest camps in the park (the park is also home to three wilderness lodges, one of which would be our home the next night) to possess a proper restaurant, pub and swimming pool along with the usual grocery store.

My sister and I checked into a cottage and cranked up the air-con to deal with the heat. We donned swimming suits and hit the pool before heading to the grocery store at the camp to buy provisions for dinner. My sister is a vegetarian, so eating in the camp’s only restaurant, which focused on game meat and river fish, was not appealing to her. She’d rather make macaroni and cheese washed down with Castle lager on our porch, watching that devilish red sun bleed the sky pink then purple into the crimson desert from the solitude of our front porch.

We didn’t account for the part where the water boiled over onto the stove-top and managed to short out not only the electricity to our chalet, but somehow to that of the entire camp. We watched in horror as a spark blew on our stove, then my sister ran to the main lodge just as the lights there shut off too. They only had to flick a switch on the short-circuit to turn it all back on, and everything would have been okay, had I not insisted on finishing preparing dinner, and managed to short the camp fuse for a second time. The restaurant manager was not as happy this time around, so we abandoned our cooking efforts and settled for dining in the Lion’s Den Restaurant’s appealing environs. I had a delicious Zambezi bream and the cook, bless him, managed to rustle up some homemade mac-n-cheese for Jessica. 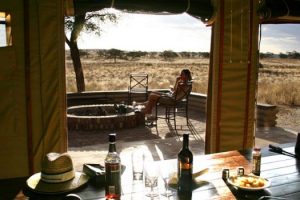 The next day we headed out super early, our car packed with supplies, as our next destination didn’t come with an on-site restaurant or drinking water. Grootkolk Camp is a good 6-hour-drive from Twee Rivieren. Nestled amidst red sand dunes in the middle of nowhere, and only 20kms from Union’s End where South Africa, Botswana and Namibia meet, this camp has a fantastic edge-of-the world vibe – it’s the kind of place where the silence and stars overwhelm you at night. We slept in desert cabins made from sand bags and canvas.

Only hardy plants survive the periodic droughts that afflict the Kalahari, and driving through this semi-desert wilderness it’s interesting to see how many have adapted to the climate. We paused just outside camp to admire the most gigantic bird’s nest I’d ever seen, perched high in a camel thorn tree. It is home to a family of sociable weaverbirds, which are one of some 215 bird species found in the park. Sociable weaverbirds live in giant multi-roomed nests, which can house as many as 200 birds at once. They are constructed by weaving twigs and straw together, and can last for more than a century. 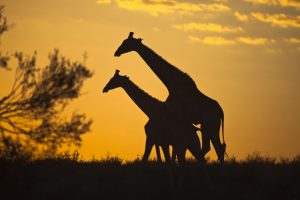 The park is also home to 19 species of predators, and my sister and I kept a close eye out as we drove. She was hoping to spot the black-maned Kalahari lion, while I wished to see a cheetah or leopard – the first is my favorite cat, the latter I’d never seen before.

We didn’t see either of my cat choices that day, but as my sister was driving the last stretch into camp, just as the sky was starting to darken towards twilight, we encountered a huge male lion sunning in the day’s final dying embers. We rolled down the windows and cut the engine, aiming our point and shoot cameras out the windows, taking his picture. I swear he smiled and winked at me.

It was the icing on the cake of a perfect self-drive safari. I didn’t realize experiences like this existed in South Africa anymore, but they do. Skip Kruger, even Madikwe, and head up north to the country’s last frontier. I promise it’s worth the effort of getting here.