“Baobabs don’t flower until they are 100 years old,” York Pareik tells me as we hike along a dry forest trail, past baby baobab trees in the 64-acre botanical park he created a dozen years ago. “They grow so slow, that’s why it’s so harmful if they are cut down, because you cut down one of those big trees they have out (in Western Madagascar), and you’ll have to wait around a thousand years for another to grow to its size.”

Parc Botanique des Mille Baobabs sits at the front of Montagne Francais on land Pareik leases from the government. He funds the park using money he raised through German and French lenders. When he started the park, just a few miles outside Diego Suarez in Northern Madagascar, back in 2002, Pareik planted 5,000 baobabs on the property. He tells me as we walk that he will never see them grow more than 10 feet high.

“I won’t live that long,” he says with a chuckle. “They are entirely reliant on water for growth. They take their time.” 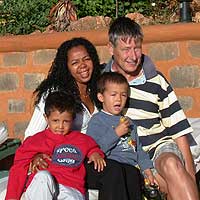 York Pareik and his family

Pareik is a Diego Suarez transplant. He originally hails from Germany, but has been living on the island’s northern tip since 1991, when he arrived for a visit from Hamburg and never left.

“I just fell in love,” he says. “There is nowhere else in the world like it. The nature here, the beauty, the friendly people, everything here was so fascinating, that I just couldn’t leave. And so here I am today. I began thinking about conservation shortly after.”

He also got lucky in love, meeting his Malagasy wife Lydia here, and today the couple owns three local hotels and have twin boys.  The park itself has also taken off. The trail we are walking on is a 1.5-mile loop that crosses through multiple ecosystems – from a mangrove swamp you continue on through savanna and dry forest before reaching the rocky slopes fronting French Mountain. From here the views across the bay are panoramic and otherworldly. Along the way there are five designated resting points with detailed info about native plants and critters on large signs: you’ll learn the park is home to chameleons, geckos, and hedgehogs and that it features flora and fauna native only to northern Madagascar, including five of Madagascar’s seven species of baobabs.

Pareik says he created the Parc Botanique des Mille Baobabs in part, thinking as a father to preserve the landscape for future generations, and also to help stop baobab poaching in the area and on Montagne Francais. Although the mountain is now an officially protected wilderness area, the government is doing little to stop poor locals from razing baobabs to grow rice or burying and burning garbage in the park’s fragile eco-system.

Since he doubts the government will do anything to stop the poaching, Pareik hopes to change it himself by educating locals about the importance of sustainable living – in short, he’s a one-man conservation team. His goal is not to keep the locals out of the park, he says, but to educate them on why it’s so destructive to cut down the baobab trees. He has signs in both French and the local dialect, and he brings in groups of school children to teach them about eco-tourism. 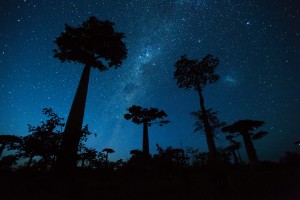 “Really, my purpose in creating the park was only partly to protect the eco-system here, it was also for education purposes,” Pareik says. Besides the 5,000 trees he has planted in the park, Pareik also works to reproduce numerous native plants which are threatened or disappearing off the island.

We are now sitting on a time worn wooden beach near the start of the circular trail we have just looped, staring out at the mangrove swamp as he speaks. At this point the trail is made from wood, a sort of pontoon bridge snaking across the swamp.

“I want to teach the locals, and the tourists, about the importance of protecting the environment. It is only through education that the nature will be saved. And you must admit it is beautiful, yes?”

I nod, letting my eyes wander over the old thirsty looking trees, with roots knotted and crisscrossed like the veins on an arthritic hand in front of me, and beyond them, the sea. I see his point. This is like no place else on earth. It should be saved.