If you thought Nosy Be was remote, wait until you read about these five islands scattered off its coast. Home to palm-fringed and porcelain beaches, they make fabulous get-away-from-it-all destinations for either a day or a few nights. Some are home to the most exclusive lodging in Madagascar. 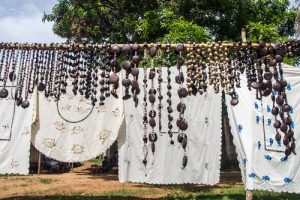 The cone shaped Nosy Komba, which rises an impressive 622 meters (nearly double Nosy Be’s summit) from the aquamarine sea midway between Nosy Be and the mainland, is the most visited of the group. Having said that, most tourists partake in organized tours that only pause in the main village for a few hours. To spend more time here, hire a pirogue (dugout canoe) or motorboat from the port in Hell-Ville on Nosy Be to take you here. Boats land at Ampangorina, where there is also a delightful craft market – look for the big multi-colored raffia bags, striped baobab trees, and hand embroidered bed sheets. If you just want to spend time sunbathing, ask your pirogue operator to take you straight to Anjiabe Beach on the southwest coast. The island is also home to excellent hiking in the interior – it takes five hours to walk from one side to the other, and you can also climb to the summit from Ampangorina.

Spending the night on Nosy Komba is enchanting. Tsara Komba Lodge, which has eight bungalows on the island’s best beach, is one of the best places to stay. These come with king beds (rare for Madagascar) and sea facing porches. Best of all, rates include full board and excellent food, which is served in a panoramic dining room. The resort also arranges loads of activities from visiting a cocoa plantation to sailing and diving trips. 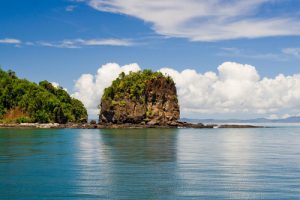 Other than a primitive campground, there is nowhere to spend the night on Nosy Tanikely, which is located 10km west of Nosy Komba, so most people just visit this officially protected marine reserve for the day. Because the island is protected, it remains one of the best snorkeling and diving sites in the area, hosting bright colored coral, fish, and even sea turtles. Snorkeling is best in the morning before the winds pick up, and if you don’t have a mask and fins, a set can be hired from the marine park entrance area where dues are also paid. After you’re done, spend a few hours lounging on the beautiful white sand beach. Although it is possible to get here via speedboat charter (hit up this island first for snorkeling before having your driver take you to Nosy Komba for the night), most people choose to visit on an organized tour (which will also visit Nosy Komba) from Nosy Be. This works well if you don’t want to spend the night on Nosy Komba, as you’ll not only get transport, but also food. Seriously, finding food can be a real issue in Madagascar.

To really get off the grid, head to Nosy Sakatia, located just off the west coast of Nosy Be. At only three square km, it’s truly tiny. Known for its orchids and forest hiking tracks, where you can look for fruit bats and chameleons hiding out amid baobab trees older than your great-great-great grandmother, it is the perfect place to disappear for a few nights. Good snorkeling opportunities and a couple of decent dive sites are also found in the waters just off shore.

It’s worth visiting Sakatia over a weekend so you can partake in the massive Sunday seafood buffet (complete with live music and lots of ambiance) at the island’s only proper lodging option, Sakatia Passions. Nestled in a coconut plantation just behind the beach, the eco-friendly resort has just 12 simple bungalows, all with sea views from rough-hewn porches, done up with dark polished wood. Staying here also benefits the local community, as the property uses a portion of its profits to help fund a school for village children – if you’re interested in giving back yourself, ask how you can get involved. The hotel also organizes a host of activities, from sailing to diving, to their favorite, deep-sea fishing.

To reach Sakatia, you’ll need to head to Ambaro beach in Nosy Beach and make your way to the Chanty Beach Hotel, where you will find pirogues that can do a transfer. If you don’t want to spend the night, you can negotiate a day charter rate.

Divers listen up: this one’s for you. Nosy Mitsio is a small and beautiful archipelago about 55km northeast of Nosy Be that has dive sites remote enough to remain relatively unspoiled. Nosy Mitsio is also home to picture perfect beaches of the bridal white variety, backed by a warm, translucent turquoise and cerulean striped sea. Best of all, Nosy Mitsio offers one more hour of sunlight per day than mainland Madagascar – you cross a time-zone getting here, which gives the island an extra hour of daylight.

Most people visit via a multi-day diving or sailing trip where you sleep on the vessel you arrive on, but I like staying on the island just offshore called Nosy Toloho, at the back-to-basics chic Constance Tsarabanjina. Despite the high-end price tag (bungalows with full board start at 500 euros), the vibe is back to basics Zen – the only concession to modernity is Wi-Fi in the communal areas. You can tell a lot of thought was put into decorating the rosewood bungalows, which feature mosquito net canopies over tasteful wood frames, striped pillows, and quality linen. Each has a private terrace overlooking the sea. Snorkelling, sailing, and water-skiing are included in the rate, but Mitsio is really a diving destination, and it would be a shame to not try an intro dive in its beautiful coral reefs while you are here. These can be done without certification, although the hotel has a PADI and NAUI-certified club for those who are. Boat transfers from Nosy Be or Ankify take about an hour and a half. 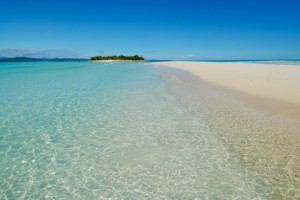 Those seeking the most luxurious Robinson Crusoe experience that money can buy in these parts will want to stay on gorgeous Nosy Iranja, located just southwest of Nosy Be. It actually consists of two islands: the larger and inhabited Nosy Iranja Be (about 200 hectares), and the smaller Nosy Iranja Kely (13 hectares), which are connected by a 1.5-kilometer sand bar that can be walked at low tide. Sea turtles regularly lay their eggs on the beaches here, and as usual, there is good snorkeling offshore.

The luxurious chic Hotel Nosy Iranja www.iranjalodge.co.za, on Nosy Iranja Be, is a great place for a night’s rest. Rates include full board, and if you’d rather not arrive by boat, a helicopter transfer from Nosy Be or Ankify can be arranged. The architecturally appealing bungalows boast sea-facing decks with hammocks and easy chairs, while inside, wood-and-stone bathrooms and four-poster beds delight. There’s a three-night minimum stay at the hotel which needs to be booked in advance – boat transfers can also be arranged at the time of booking (you don’t have to arrive by helicopter).

If you don’t want to spend the night, join an organized tour from Nosy Be. The journey between the islands takes between two and three hours (depending on if you take a speed or sailboat), and excursions usually include snorkeling and swimming, followed by lunch on the boat.